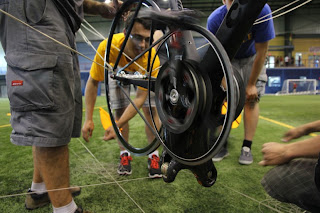 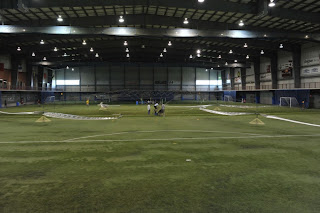 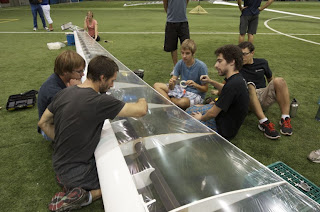 The efforts of Maryland University's Gamera II team in snaring the US$250,000 Sikorsky Prize for human-powered helicopter flight have garnered much attention (not least from Gizmag) in recent months, and with good reason. But the team is by no means alone in chasing down its sadistic requirements set by the American Helicopter Society in 1980. First tested in August, The Atlas helicopter, by human-powered vehicle specialists AeroVelo, is the latest machine to enter the fray, and has already flown successfully, becoming only the fourth human-powered helicopter to do so.

In fact it was the very same day, August 28, 2012, that Gamera II broke through the crucial 60-second barrier stipulated by the prize (though flights must also achieve an altitude of 3 meters (9.8 ft) while remaining inside a 10-meter (32.8-ft) square) that Atlas took flight for the first time, for a total of "about 4 seconds."

That may be 61 seconds shy of the current benchmark, but AeroVelo, which began life as the University of Toronto's Human-Powered Vehicle Design Team in 2006, is no slouch when it comes to human-powered vehicles. The team not only broke the college land speed record in 2011 with its Vortex streamlined bicycle (achieving a speed of 72.6 mph/116.9 km/h), but has also seen successful forays into human-powered flight with what it claims is the first working human-powered ornithopter. AeroVelo has reason for optimism, then.

Fundamentally, Atlas is designed upon a very similar principle to Gamera II and its predecessor. They all consist of four twin-blade rotors connected to a lightweight frame, surrounding the pilot who is suspended on a bicycle-like mechanism that powers the vehicle from its center.

The team went through a taxing period of testing between August 21, when Atlas was assembled in its entirety for the first time, and September 4. The testing period was not without teething trouble and hiccups, including a crash on August 29 that damaged the aircraft. The team also realized that the rotor blades had very limited freedom of movement before bracing lines would be clipped, leading to many test flights being aborted at an early stage. The time made design changes to give the rotors more breathing space, while limiting their vertical movement.

It would seem foolish to bet against Gamera II just yet. NPR reports that AeroVelo's Atlas team is a mere eight strong, and has the added frustration of having to disassemble and reassemble the Atlas during every day of testing, due to the limited availability of the indoor soccer field used for test flights. Having said that, human-powered flight is still anything but predictable. We watch with interest.