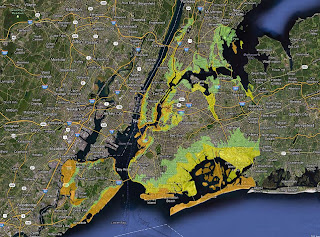 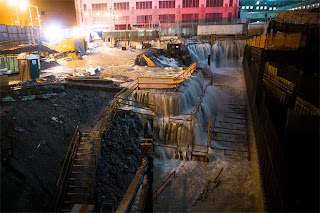 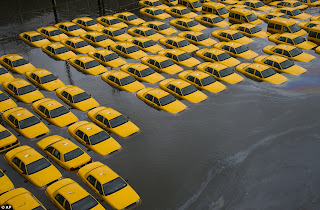 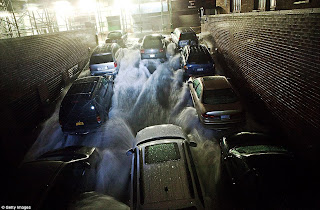 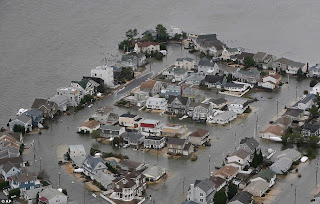 Manhattan in darkness, 14ft flooding and infrastructure grinds to a halt... and now come the rats

Rats scurrying to escape rising floodwaters in New York could spread diseases as they infest new areas, according to a nature expert.

A 13ft wall of water caused by the storm surge and high tides have caused flooding to subways and road tunnels in the city and torrents of water poured into city streets. The rising water will force rats out of their underground lairs and into contact with humans, according to Rick Ostfeld of the Cary Institute of Ecosystem Studies in Milbrook, New York, speaking to The Huffington Post.

Vermin: Stock picture of rats in New York. Rats could come into contact with humans as they seek safety from the flood

He says rats are expert survivors and will escape the floods and head for safer ground, such as apartments and other buildings inhabited by humans.

He said: 'Rats are incredibly good swimmers and they can climb.'

According to Ostfeld, this could result a rise in infectious diseases carried by urban rats, including leptospirosis, hantavirus, typhus, salmonella, and even the plague.

Manhattan could be dark for a WEEK after electrical explosion rocks power plant Nuclear plant on alert as Superstorm Sandy threatens cooling system of spent uranium fuel rods 'One of things we know can exacerbate disease is massive dispersal,' he added.

'Rats are highly social individuals and live in a fairly stable social structure. If this storm disturbs that, rats could start infesting areas they never did before.'

Rats don't need to bite a human to transmit the diseases as rodent faeces and urine can spread conditions like hantavirus.

Flood: A flooded Midtown Tunnel in New York City after Sandy hit the US East Coast on Monday night

However, Ostfeld suggested that the huge volume of water Sandy has brought should dilute the pathogens, reducing the risk to the public.

There are precedents for rats being displaced by floods and forced into buildings. In the UK this summer washed out rats began infesting homes.

'It's not just about the high winds and rain,' said Ostfeld. 'A rat disturbance is something we should be concerned about.'