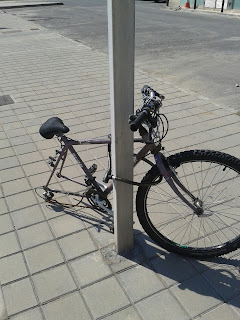 Cabot Circus security team spot bike thieves at work using CCTV and stop them in their tracks before calling police.

Both men were arrested and charged for attempted theft. One man was given a referral order and the other received a conditional discharge.

Video: How to beat the bike thieves

Mountain Biking UK features editor Doddy talks you through the do's and don'ts when it comes to thief-proofing your bike. Be sure to watch for essential tips for keeping your prized wheels safe.

70 arrests made in bicycle theft crackdown

Has your bike been nicked in London? (Jon Ashelford)

More than 70 arrests were made last week as a result of increased activity as part of Project Cycle Ops - a partnership initiative between Transport for London, the police and cycling groups to tackle cycle theft from public places across the Capital.

Officers from the Transport for London (TfL) funded Metropolitan Police Service Safer Transport Command (STC), British Transport Police (BTP) and City of London Police (CoLP) stepped up their activity, using a range of tactics to crack down on cycle thieves. In total, more than 50 bikes were seized which officers are now trying to identify whether they are stolen and find their rightful owners.

Eleven of the bikes seized were Bromptons which were recovered as a result of a search warrant at an address in Harrow, following intelligence into the sale of stolen bikes online. So far, 13 bikes, including four of these have been identified as being stolen and will be returned to their owners.

In the last week, more than 1400 cyclists have had their bike security marked and registered on bikeregister.com for free using BikeRegister, the MPS preferred cycle registration database and the main search tool used by the police to reunite stolen bikes to their owner. They were also given advice on how to lock up their bikes securely in order to deter cycle theft.

Registering details of your bike helps the police and retailers identify and verify the legitimate owner of bikes that have been stolen or are being resold. Over 48000 bikes have been marked and registered onto BikeRegister by the MPS since June 2010.