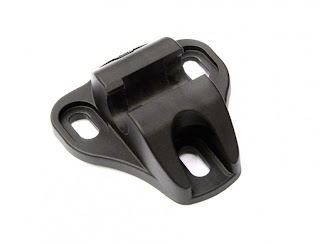 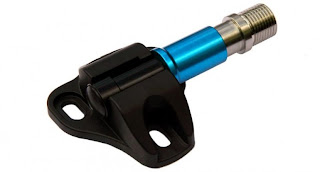 SPORTS."World's lightest" bike pedals look like they're barely even there

The Ultralite bicycle pedal system is claimed to be the lightest in the world, and features pedals that look like they've been stripped down to almost nothing

Even if you’re not a cyclist, you’re probably aware that a great deal of today’s higher-end bikes have pedals that the rider’s shoes simply click in and out of. These are known as clipless pedal systems, as they’re an alternative to using toe clips and straps. They first gained popularity in the mid-80s and ever since then, bicycle components companies have been trying to make them lighter and simpler. Now, Colorado-based Ultralite Sports is about to release a clipless pedal system that it claims is the lightest in the world – and the pedal itself just looks like a bare spindle.

Designed for road cycling – sorry, mountain bikers – the Ultralite system features two similar models: the titanium-spindled Cirrus Ti, and the slightly heavier steel-spindled Nimbus St. In both models, the pedal is made up of a central one-piece spindle, encased within two aluminum barrels that turn independently of the spindle ... just like the platform of a regular pedal turns independently of its spindle.

The longer and skinnier of the two barrels (see the photo at top) slips inside of a cylindrical receptacle on a nylon cleat, which is attached to the underside of the cyclist’s shoe. To fully engage that barrel, however, the cyclist must slide their foot in towards the bike. Doing so involves pushing the other barrel, which is spring loaded, to the inside – the tension of the spring against the side of the cleat then proceeds to hold the cyclist’s foot in place.

When it’s time to get out, the rider must again slide their foot inwards to contract the spring, and then pull straight up. This is a different type of movement than is used by most clipless systems, in which the cyclist twists their foot sideways to disengage. According to the folks at Ultralite, riders pick the technique up pretty quickly. Undoubtedly, though, the learning curve might involve experiencing a few tip-overs.

The weight, though... the Cirrus Ti system, consisting of two pedals and two cleats, tips the scales at a reported 112 grams (72 grams for the pedals themselves). This is over 100 grams less than any other system currently on the market, claims the company. The Nimbus St system, for shallower-pocketed and/or heavier riders, weighs 146 grams. Buyers of either model can choose between cleats that offer four degrees of float or none at all, plus they can opt for high tension springs that hold onto the cleats most firmly, or low tension springs that make getting in and out easier.

The pedals are now available for preorder, and should start shipping as of November 1st. The Cirrus Ti is priced at US$450, while the Nimbus St will set you back $315. 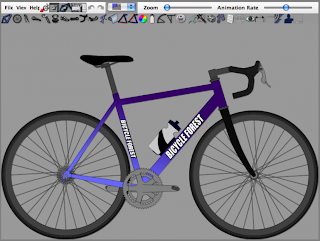 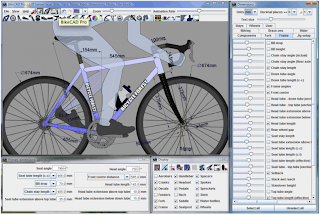 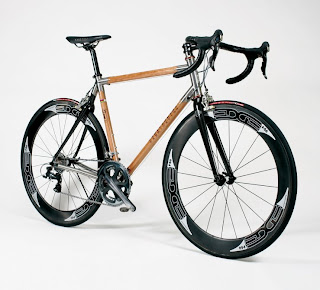 BikeCAD lets you design your dream bicycle online, for free

Anyone who likes bicycles has at some point probably fantasized about it - getting their own one-of-a-kind custom-made bike. There are oodles of independent frame-builders out there who will gladly accommodate such fantasies, but their services generally don’t come cheap. Building a high-end bicycle from scratch definitely requires a lot of skill, and even designing one isn’t something that just anyone can do… or is it? BikeCAD, a free online applet, guides users through designing their own road, mountain, tandem or recumbent bike. They can then take their finished design to a builder, or even attempt to build the thing themselves.

The purpose of BikeCAD

Canadian mechanical engineer Brent Curry developed the program. “BikeCAD was originally intended to allow custom frame builders to quickly design a bike and easily obtain the lengths and angles at which to cut the tubes,” he told us. “Over the years, BikeCAD has been enhanced to account for component designs, spoke length calculations, and paint schemes… With all of BikeCAD’s added features, the program now appeals not only to frame builders, but also bike shops, bicycle fitting specialists and serious cyclists.”

What you do with it

The basic, free version of BikeCAD is available as an applet through Curry’s website – this means that instead of downloading it, you just use it online, but save your project to your own hard drive. You start by selecting the type of bike you want to design, which can include road, kids, recumbent, tandem, plus hardtail and full-suspension MTB (there’s also a version for building wheels). Then, through the program’s customizable Fit advisor, you enter your personal body dimensions, and the optimum frame geometry will be automatically determined for you. Tinkerers and/or know-it-alls can then proceed to tweak some of these numbers, although they do so at their own peril – that said, professional frame-builders receiving these designs would likely question any really inappropriate geometry.

BikeCAD for the big boys

And on the subject of professionals, there are apparently at least 200 of them, all around the world, using Curry’s software. For users like these, he developed BikeCAD Pro, the paid, downloadable version of BikeCAD. It sports a pannier-load of extra features, including the ability to reverse-engineer bikes from digital photos, and an animated human figure that rides your designs, to show how the client would interact with the bike. There’s also a third version of the program, called BikeCAD for the Web. Bicycle builders can install it on their websites, so prospective clients can create their own bikes, but only within parameters set by the builder – the distinctive graphics, components and other features unique to their brand will always be present, while anything that strays from their design philosophy won’t be possible.

The man behind it all

Brent Curry himself would definitely be worthy of a Gizmag article. He started his career at Vitus Cycles in France, went on to build mail delivery bikes in Australia, and then worked under renowned frame builder Chris Dekerf in Vancouver. In the winter of 1999, he was part of an unsupported team that rode a thousand kilometers across the Canadian Arctic. He has built a number of experimental bikes, including the fabulously-goofy Couchbike, a couch on wheels that he pedaled across Prince Edward Island in 2002. Although there’s no option for designing your own Couchbike on BikeCAD, you can rent the original from him, along with a variety of other non-traditional human-powered vehicles. You can check it all out, and use BikeCAD or purchase BikeCAD Pro, at his Bicycle Forest website.