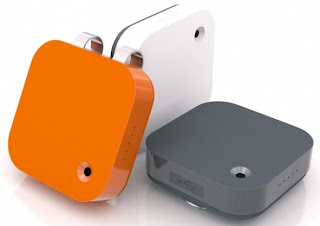 As illustrated by the recent unveiling of the Autographer, manufacturers are waking up to the idea of a consumer-friendly wearable digital camera that takes photos automatically. The latest device of this type to appear on our radar is Memoto, an intelligent wearable camera that can take up to two day's worth of snaps before requiring a recharge.

Designed by a Swedish company of the same name, Memoto is intended to appeal to the thriving “lifelogging” community – that is, people who enjoy documenting their entire lives with the aid of various gadgets and gizmos. To this aim, Memoto spent the past year traveling the world and seeking the opinions of notable lifeloggers, in order to learn exactly what such people want to see in their dream device.

The end result is a device that features no buttons. Instead, it automatically captures a photo every 30 seconds with its 5-megapixel sensor when worn, and can include the current GPS position of the camera, along with a time-stamp for each image. A built in accelerometer ensures that each photo is correctly oriented regardless of how the camera is positioned while a LED battery life indicator highlights the remaining charge. The unit measures 36 x 36 x 9 mm (roughly 1.5 x 1.5 x 0.5 inches) and contains 8 GB of internal storage.

Once connected to a computer via Micro-USB, Memoto can automatically upload the photos taken to the Memoto Web Service to allow for sharing and archiving. The web service comes with a subscription fee which hasn’t been finalized yet but is expected to cost around US$5 per month, and will be complemented by apps for iOS and Android.

Memoto is expected to be released in early 2013, and the unit will be offered in graphite, grey, white, and orange colors, for $279. However, the camera is also part of a Kickstarter campaign, and so those wishing to get in early can do so by ponying up $199 or more, for which one receives a camera and a one year web service subscription. 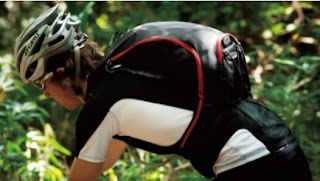 Shimano is one of the most well known names in cycling thanks to a component line that appears on bicycles around the world. The company is determined to appear on bicycle riders as well. Its new Unzen hydration pack line rethinks pack design in an effort to make it less restrictive and more comfortable.

The main feature that separates Unzen hydration packs from competitor offerings is the Rider Fit Cross Harness. Typical backpack straps loop straight around your shoulders and underams, a route that Shimano says can restrict the pectoral muscles actively used during mountain biking.

The Rider Fit Cross Harness re-routes the shoulder straps so that they meet on the chest. Shimano says that running them across the center of the pectoral muscles eliminates restriction and empowers more aggressive off-road riding. The harness is fully adjustable, letting you get a snug, personalized fit.

The configuration of the straps eliminates the need for a waist strap, which Shimano says promotes freer breathing. By pulling the straps out from under the arms, the design also aims to keep the underarms cooler and drier.

The pack itself is designed with what Shimano calls ACCU3D technology, which aims to create an ergonomic shape that hugs the body and limits bouncing and rustling. The 3D design also raises the center of the pack up off the body to promote air circulation and cooling.

Other Unzen features include a stretchy body that expands around its contents, a side zipper for quick access and a felt-lined pocket for storing sensitive items. The pack comes with a Hydrapak water reservoir that uses an open clipped top, making it reversible for cleaning.

Shimano's system certainly sounds interesting, but after years of mountain biking with a regular hydration pack, I can't say I have ever felt all that restricted by the shoulder straps. I think a full head-to-head comparison would really be necessary to identify the Rider Fit Cross Harness as superior to standard shoulder strap systems.

The Unzen is part of a greater bag line that Shimano announced earlier this year. It will be hitting the market in the coming weeks in several different sizes.