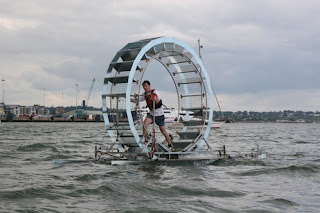 video http://irishseacrossing.co.uk/ISC_video.html ON THE WATER.Man attempts to "walk" across Irish sea in a human hamster wheel

Thirty-five year old Chris Todd has attempted to “walk” across 106 kilometers (66 miles) of open sea in a giant hamster wheel-like raft dubbed Tredalo. Unfortunately, the plan to cross the Irish Sea – leaving from Wales and arriving on the east coast of Ireland in the South of Dublin – didn’t quite go to plan. Harsh weather conditions forced Todd to abort the mission after approximately eight and a half hours and 42 kilometers (26 miles) into the journey, when he encountered rudder problems. View all “I could see the glow of lights illuminating the clouds over Ireland,” said Todd. “Despite the wheel coping well with larger than forecast waves ... the rudders were overcome by fighting the force of the waves, which were constantly battering the side of the raft, and eventually both rudders failed.” Fortunately for Todd, the accompanying support boat came to his rescue and no one was hurt during the ambitious challenge. The crew attempted to tow the Tredalo back to shore, however the conditions caused the raft to slowly break up before the decision was made to let it find its final resting place at the bottom of the sea. Todd had intended to use his expedition to raise funds for the Wiltshire Blind Association and the Royal National Lifeboat Institution. The mission would have required him to walk for around 48 hours straight, which according to him “[would] be like running roughly ten back-to-back marathons”. The Tredalo craft was originally built for lake and leisure use, featuring a sub-frame, two hulls and a giant paddle wheel. It is capable of supporting a maximum boarding mass of 200 kg (440 lbs) and can host two adults, or one adult and two children comfortably. While the Tredalo didn’t survive the onerous sea challenge, the craft has been designed with safety at its core.

“The wheel has been designed from the outset to be spoke and axle free. This has created some unique technical challenges which have all been overcome to offer a free and easy access and egress from the Tredalo, so that it is possible to leave the raft in a hurry if this were ever to be necessary,” Todd told Gizmag. “The Tredalo has been developed to have a 'topple angle' of 60 degrees and performance in the Irish Sea has confirmed that the craft is very stable even in some quite considerable waves. Lastly, the adjustable hand rail offers the user a sturdy support which really makes the raft feel safe and steady.”

Learning from his sea adventure, Todd will be investigating the options of an upgraded rudder design for use in moderate to heavy seas. “The existing design is more than satisfactory for lakes and inland waters,” confirmed Todd. And for those who want to start a new trend of “walking on water," Todd is hoping to launch the Tredalo rafts onto the market. Tredalo purchase inquiries can be made via his website, with final prices to be confirmed.

“I think that the Tredalo would be just perfect for major leisure parks as it is a very interactive and energetic way to have fun on the water and always attracts a lot of attention. During testing people of all ages wanted to 'have a go'!” said Todd.

You can see Todd in action on the Tredalo in a video posted online.