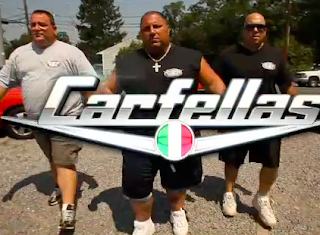 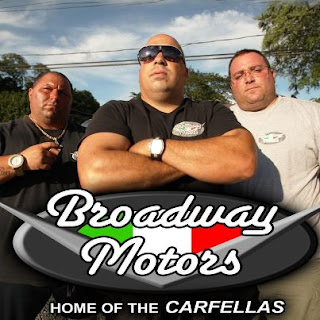 In the ever-expanding desire for shows about cars, it's only natural that eventually a show was going to be made about used cars. It's called "Carfellas" and I took some time to review this new offering from Discovery so you don't have to watch it.

To put it succinctly, "Carfellas" is not a show that's going to be worthy of DVR space, Maybe, just maybe, it might be worth stopping for a peek while channel surfing. You know, the way people slow down to watch the remains of a car crash.

Here's how the public relations team at Discovery describes this used car show: "In 'Carfellas,' reformed convict Mikey D. is joined by his crew, Tommie and Mario. These three steer the wheel of Broadway Motors, Mikey D's used car dealership in Amityville, Long Island. Mike runs the lot, is obsessed with moving inventory and generally keeps the guys in check. Mario knows cars inside and out. He's a skilled appraiser with a keen eye. Tommie, aka "5 x 5" (five feet tall and five feet wide), is the muscle of the operation with a genuine love for Cadillac's, cannoli's, and cute girls. [original punctuation kept intact]"

Let's see. It's a used car lot run by a man who served three years in federal prison for racketeering who runs with "a crew" that includes "muscle," which, as we all know, is the key to a good used car operation. Mario supposedly knows cars "inside and out" yet that wasn't demonstrated in any of the clips I watched.

Yep, I admit it. I have not seen an entire episode, which could change my perception of this show. I only watched the 12 clips on the Carfellas website. However, the fact that these are supposed to be the best clips that make you want to watch the show makes me comfortable in my review.

Here are some recent descriptions of episodes:

CHICK MAGNET: Mikey D. haggles with a buddy for a sweet IROC Z28 (a Chevrolet Camaro), taking him back to his glory days. Meanwhile, Mario and Tommie compete to see who can find the most girls to work a car wash at the lot.

CADILLAC INTERVENTION: To get ready for a big classic car show, Mikey and Mario haggle for a 1963 Ford Thunderbird. Tommie tries to buy a 1963 Cadillac Coupe De Ville but his temper could blow the deal. Then, Mario stages an intervention for Tommie's Cadillac addiction.

TOMMIE CANNOLI: A sweet 1969 Chevelle rolls up on the lot and catches Mikey's eye, but a surprise visitor throws a wrench into the negotiation. Mario and Tommie check out a musician's Cadillac Calais in Brooklyn. Then, Tommie gives Mario a Brooklyn makeover.

Wow, it's a truly horrible show. OK, maybe that's too harsh. The production values are good but this is "Jersey Shore" meets "Chasing Classic Cars" meets every bad stereotype of the used car business and Long Island Italian-Americans ever made.

"Eventually our dream is to only sell cars like this," Mikey D tells a seller of a 1968 Chevrolet Camaro. Actually, it seems as if the dream of Mikey D is to be "Chasing Classic Cars - The Next Generation." Wayne Carini, the host of "Chasing Classic Cars," must wonder what shouting, F bombs (seems like every 10th word is the F bomb) and slacking off (one clip showed the crew building an improvised bocce court with a ladder) has to do with classic cars.

There's a Lesson In Here

OK, maybe there is something else I like about "Carfellas." It serves to reinforce that used car dealers are in business to make a living. (Well, odds are good Broadway Motors, the way it appears to be run, won't be in business long.) Used car sellers can't expect to go into a dealership and sell their used cars for retail value. Dealers have expenses that need to be met.

At one point, in the above mentioned case of the 1968 Camaro, Mikey D says, "This guy didn't do his homework." The seller was trying to sell his Camaro for $24,000 to a dealer after paying $20,000 for it eight months earlier. I can't necessarily tell you how to value a classic like a Camaro. That's best left to the About.com Camaro web site. Oops, wait, we don't have a Camaro website. But I can tell you how to fairly value a used car.

I'm not sensing great things for "Carfellas" going forward. I hope Mikey D has a successful life after prison and that Broadway Motors somehow manages to succeed. My guess is it becomes a whole different operation once the Discovery cameras stop recording, which could be soon.

the web of the business , the car shop