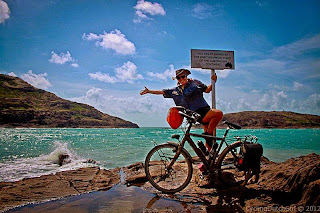 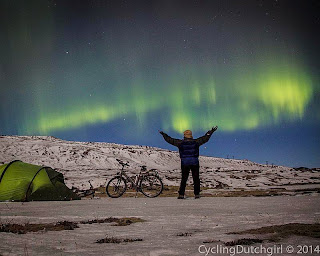 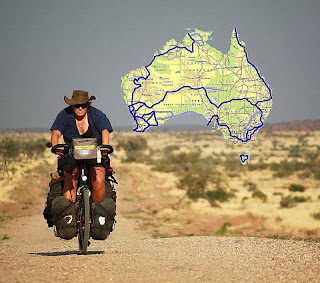 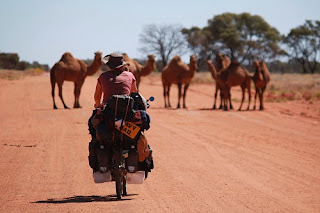 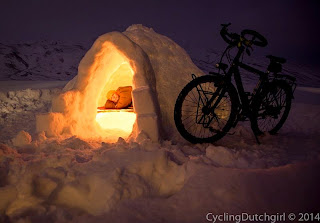 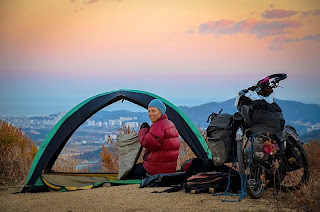 We met 2011 in Tasmania/Australia and have stayed in contact ever since. I am following your life long journey with great interest and I am always impressed about your ability to adapt to every new situation. Happiness seems to be the biggest part of your character.

The Freedom. It is an addiction and many people (including yourself) will know what I'm talking about.
It even has a name: "Eleutheromania" :)


2.) I guess there are also times when you hate what you are doing. In which situations do you get to this point? And how do you cheer yourself up again?

Actually not. There has never yet been a time I hate what I'm doing... I do have days that I'm not feeling as wonderful as others.
But I only have to think about how fortunate and lucky I am to be able to live the life I choose to put a smile on my face.
The good thing about being free is, if you don't like something, or somewhere, you can change it :)


3.) You are in Iceland at the moment. You spent half of the winter there. This is amazing! Can you please tell us a bit about it?

Thanks, I was originally planning to be in Russia. But I could not get the visa I was after so I came here. It is lovely! Magnificent scenery
and awesome hospitality. Because it's winter people think I'm a little mad. But I've made some wonderful friends and the weather is only bad when you label it as such. It doesn't get too cold. You just have to prepare to be slow (that is not at all a problem for me).

Always bring spare food in case you get snowed in. Keep checking the weather forecast.
The most spectacular thing is seeing the Northern lights from my tent. I absolutely love them! I've been very lucky in that regard.
The only downside is that many roads are closed in winter... Oh, and the wind can get pretty servere.

4.) Countries, people, landscapes, cultures….the world is very diverse. In which environment are you most happy?

I love big skies and open spaces. The feeling of being a tiny speck in a huge big world. I love mountains too.
But I'm happy pretty much anywhere as long as it doesn't rain. I don't like rain.

Whoa, that's difficult! I don't know if there's one story I would class as 'funniest'.
But I love meeting and talking to people, it can lead to some funny situations...
I could be talking to a new person one moment, and the next moment I'm;

Dancing on a Turkman-wedding in traditional dress
Hiking a pilgrim-route with Tibettan pilgrims
Sleeping in a brothel while the room you sleep in is actually used by a prostitute... At the same time!
(I was wondering if I should've been taken pics here, I know people pay lots of money to see this kind of stuff)
Flying in a helicopter to a remote little island to go and catch (for medical examination) one of the rarest birds in the world,
the Kakapo.

6.) What would you say was the craziest thing you have ever done in your entire time on the road?

Depends how you define 'crazy'. I guess some people would find cycling across one country pretty crazy. (Specially if that country is, for example, 4000km wide and you avoid paved roads...)
Or building an Igloo and sleeping in it under the Northern lights. I don't call that crazy though. It made perfect sense to me.
One time I left my bike for 4 months outside a hostel in Kathmandu and bought a motorbike in India. To ride around there for a while.
That motorbike might still be sitting outside a guesthouse in Pokhara... Then again, it might not.
Or saying; "yes!" To people I only just met to leave my bike and take a trip into Australia's most remote desert. Some might call that crazy.
But hey, you've got to live a little!

Also being in the wrong season might be considered crazy. I just call it a lack of planning...
I cycled through Iran mid-summer and Tibet mid-winter. I rode in the monsoon in India and in Laos and I spend sweltering hot & humid summer in Japan.

And now, obviously, I'm in Iceland :)


7.) What was the biggest disaster?

Running out of coffee on more than one occasion.


8.) You spent a lot of time cycling through the desert of Australia. For a lot of people this sounds pretty boring. Can you explain what you got out of it?

Not boring at all! I only get bored if I have to stick to some highway somewhere with lots of traffic, ugh! But the Australian desert is full of life and one of the most beautiful places in the world (in my opinion). You see little critters everyday, lizards, snakes, emu's, camels, kangaroo's, dingo's, spiders, flies, ants... (those last two are not my favourite) And wild flowers. Every place you put your tent is a perfect camp spot and with no light pollution you have the most awesome night skies!


9.) Do you like cooking ? What do you cook while somewhere remote? What cooking gear do you use? Any recipes for us?

I do have a wonderful recipe of my self-invented Eyafjallajokull-mash potato. You find it on vimeo.


10.) What does a perfect cycling day look like for you?

Every day out there is a perfect cycling day! I prefer no rain. But either way, it still beats sitting in an office ;)

11.) For the future. What are you planning to do next?

Every time I plan something it does not work out. But I've decided to stay in Iceland a few more months before making my
way across to the America's. 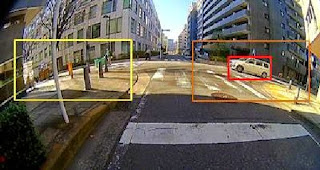 When it comes to driver awareness, we all know how hard it can be to keep an eye on every pedestrian and moving vehicle in our vicinity, particularly when driving in a busy city area. Couple this with the upcoming Kids and Transportation Safety Act in the US that dictates that all cars built from May 2018 onwards must be fitted with rear view cameras as standard, and it becomes doubly important that on-board vehicle cameras are used to their best advantage. To help in this regard, Fujitsu Semiconductor Limited is set to introduce software that assists in detecting and identifying cars, people, and other moving objects and alerts the driver of their position and direction of travel.

Using what Fujitsu calls its "Approaching Object Detection Library" in conjunction with a proprietary System-on-Chip (SoC) graphics device, the system uses the images captured by additional vehicle cameras to automatically detect nearby moving objects and compare them to stored representations to identify and categorize them.

This is achieved by using elements built into the Approaching Object Detection Library, where vehicle camera images are analyzed in conjunction with a detection algorithm that identifies approaching objects. These are then run with detection-error reduction processing to eliminate false positives. The resulting image is overlaid on real-time images collected through the vehicle's on-board cameras, and displayed on a dashboard monitor, providing vital information for the driver about the objects moving around them.

Though there are other systems available that aim to improve a driver's all-round vision, they still require constant monitoring and, given the increasing demands on drivers with all of the gadgets that vie for attention within the car, the AOD system may well do even more good simply by being unobtrusive.

The AOD library will be available in an evaluation version from this month, and will be shipped with an evaluation board that includes Fujitsu's graphics SoC. Release for commercial sale is slated for September this year.

Fujitsu will also be demonstrating this and other solutions at the 2014 Automotive Engineering Exposition, May 21–23 in Yokohama, Japan.
http://expo.jsae.or.jp/english/