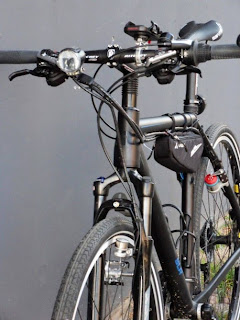 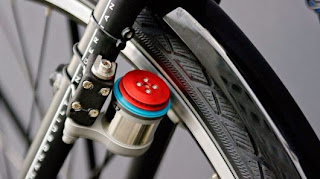 Friction drives like the Rubbee provide a lighter, simpler option for transforming a regular bicycle into an e-bike. Velogical's all-new Velospeeder makes the friction drive even lighter. The compact e-drive solution weighs under 4 lb and allows for seamless switching between e-assist and manual riding. The company claims it's the lightest and smallest bicycle e-drive (soon-to-be) available.

The small motor system is barely noticeable on the greater bikeThe Velospeeder e-drive puts out up to 600 watts and weighs The Velospeeder features twin motorsVelogical engineer Peter Frieden testing the VelospeederView all
Cologne-based Velogical builds rim dynamos for powering bike lights, and at first glance, that's what the Velospeeder looks like. However, it's actually a sized-down e-drive that offers up to 600 watts of power and 29.5 lb.ft (40 Nm) of torque. At 3.5 lb (1.6 kg) for the entire package, it comes in much lighter than other e-drive kits. The current iteration uses a 92-Wh lithium-polymer battery that provides up to around 12.4 miles (20 km) of e-assist. Velogical says that the battery is light enough to carry a spare and easy to swap.

The dual Velospeeder motors mount to the seat stays of a traditional bicycle frame, where they transfer power to the rear rim by way of their polyurethane rings. A toothless drive system on a smooth metal rim sounds ripe for slippage, but Velogical says that the dual swing-axle design of the drive keeps the motors in optimal contact with the rim at all times. In this way, the Velospeeder is able to efficiently apply pressure and power the wheel at start and slow speeds, but also decrease pressure during faster speeds, preventing unwanted braking and wear effects.

The Velospeeder features twin motors
One advantage of a lightweight e-drive is that it doesn't add a brick-ton of weight to the bike, freeing up easier manual pedaling. The most recent Velospeeder design makes it easy to switch between manual and electric-assist riding. When the rider powers the motors on, they automatically adjust to contact the rim at the same time. When the rider shuts the motors off, they adjust off the rim, freeing up natural wheel spin.

The Velospeeder is in the prototype stages and was revealed at the Spezialradmesse last month. Velogical has put 4,000 km (2,485 miles) on its Velospeeder-equipped test bike, in a variety of weather conditions, and reports that the there is no noticeable wear on the rim. The company plans to continue testing and optimizing the system before moving to start distribution next year. It will be selling the drive to bicycle manufacturers for installation on new models and bike shops for retrofitting, but it does not plan to sell directly to consumers as it does with its dynamo.

Velogical doesn't have a polished video yet, but the short clip below shows how the Velospeeder applies torque to the rim and shuts off to allow natural spin. Velogical told us that one of its next steps will be working on the noise level.