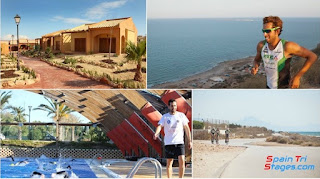 SpainTriStages open for business
October 7, 2016 Gary Roethenbaugh 192 Views 0 Comment Coaching/training, Triathlon
With around one-year’s planning to get off the ground, new training camp operator SpainTriStages, which is based in southern Spain, is now open for business. A release from the company stated that ‘The idea is to offer our training playground and create high quality triathlon training stages/camps to triathletes all over Europe, so they can train in dry and good weather conditions, during the worst months of the year – over winter, from October to May.’

With a low average rainfall and high average temperatures throughout the year, and with the help of the local infrastructure in the region, Alicante in Spain has become a popular place to train for triathletes, and a number of pro cycling teams that visit the area pre-season.

SpainTriStages offers ‘Triathlon Stages/Camps/Training’, from October until May in Alicante, Spain. The company adds that it has ‘fully certified triathlon trainers offering 7 or 14 day stages/camps in the area of Alicante.’

Thanks to agreements with some local event organizers, athletes will be able to book a number of special packages that include triathlon training plus event entry included. This will be ‘before the event registration officially opens to guarantee the best price and a starting place in the events’.

The SpainTriStages concept is a mixture of full packages of training, ‘providing high quality accommodation in private chalets within a resort’. These give the athletes the ‘freedom to train on their own and of course have the time to visit the surroundings, enjoy the food and people of Spain.’ SpainTriStages also include a Swim Smooth Masterclass by a certified coach into its packages, with the possibility to have a private session with a full video analysis.

SpainTriStages will take care of airport pick-up and drop-off. The accommodation is provided in a private chalet for 4 persons with ‘fully-equipped kitchen and comfortable beds’. The resort used in Alicante also ‘provides plenty of services as an on-site supermarket, spa and gym, and a massage therapist at the Resort Medical Centre’.