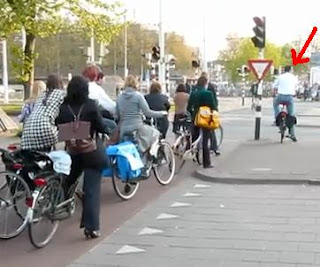 time of the video 1st minute , the spaniard appears...


28 de abril de 2010 — Morning rush hour in the 4th largest city in the Netherlands. Streets look like this when 33% of ALL trips are made by bicycle!

This is an ordinary Wednesday morning in April 2010 at around 8.30 am. Original time was 8 minutes that were compressed into 2 minutes, so everything is 4 times faster than in reality. The sound is original.

These cyclists cross a one way bus lane (also used by taxis and municipal vehicles), two light rail tracks and then a one way street that can be used by private vehicles.

This is one of the busiest junctions in Utrecht a city with a population of 300,000. No less than 18,000 bicycles and 2,500 buses pass here every day. And yet Google Street View missed it. Because private motorized traffic is restricted here.

Behind the camera is a railway (you can hear the squeaking sounds of the trains passing) and the main railway station is very close too. A number of rental bikes from the station pass and many of the cyclists will have come by train for the first part of their commute.

For those who frown upon the total absence of bike helmets in this video, consider these findings from a US study: