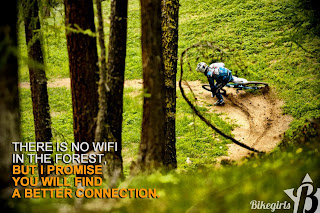 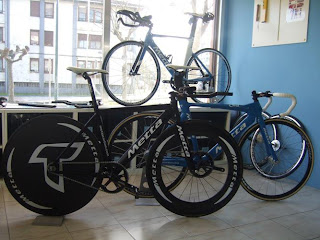 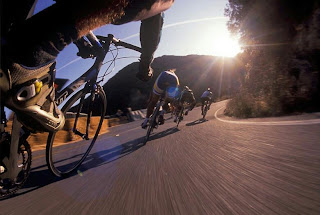 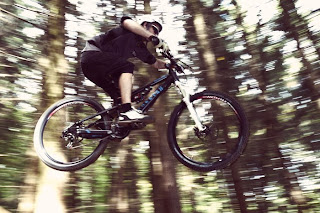 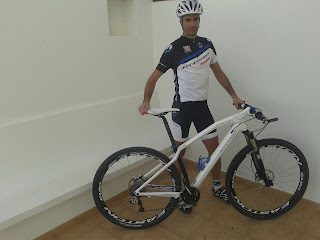 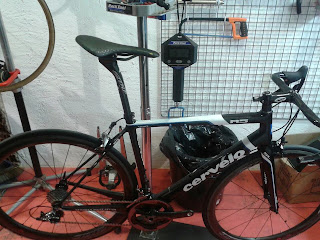 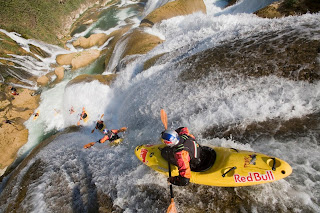 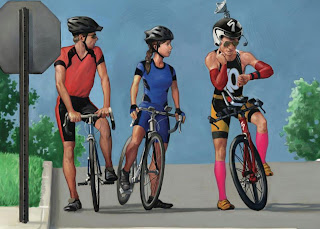 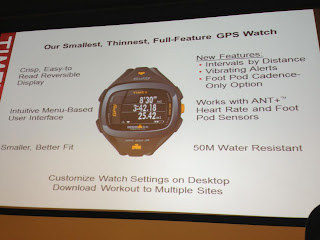 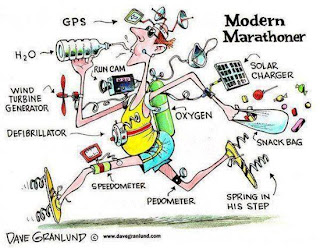 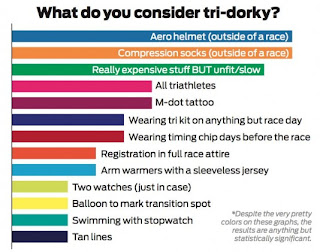 An unscientific calculation of the triathlon cool quotient.

One thing I’ve discovered during my short triathlon career is there are certain behaviors deemed socially acceptable by triathletes (what I’m generously calling “tri-cool”), and certain behaviors that are clearly socially unacceptable, hence the term “tri-dork.” As a rather new entrant into the sport, coming from a running background, the distinction between what is cool and what is dorky hasn’t always been clear to me, especially on the swimming and biking sides of things.

When I first got an aero helmet, I thought it was the coolest thing ever and wore it everywhere until a friend pulled me aside and said, “Dude, these guys aren’t going to let us ride with them anymore if you keep wearing that helmet.” To which I replied, “WHAT?! I CAN’T HEAR YOU THROUGH THESE EAR GUARDS!”

So this month, I tried to tackle the question: Am I a tri-dork? If so, what can I do to lessen my dorkiness, perhaps even venture briefly to the cool side? To answer this question, I informally polled my Twitter and Facebook followers to see what they thought was cool, and of course, what was dorky. The results* are below.

Using the brain that consistently scored me near the mean in my engineering courses, I came up with some fairly average conclusions:

According to the “data,” aero helmets and compression socks are the big winners—or losers. Apparently it’s not cool to wear aero helmets or compression socks outside of an actual race. Why? Is it considered poor fashion? Eye-poking hazard? Let’s be honest, we can’t blame it on that. Triathletes are anything but fashionable when it comes to racing and training gear, and they’re always in some kind of protective eyewear (aviators are best).

I think the backlash derives from the general aversion to “racing” when you aren’t at a race. Nobody likes the guy who races the workout. And wearing your racing kit at inappropriate times may remind people of that. But what’s the big deal with trying out your race equipment before race day? It seems insane to me that you would go through all this training and prep, and then wear completely new, unused items during a race! There, I said it! I’m an aero helmet trainer! No, I don’t wear my aero helmet on group rides, but every once in a while I wear it on a training ride. And when I do, I ride when no one is around and I beeline straight out of town, full of shame. But … I think it’s worth it. You sweat differently, it is weighted differently and it can affect your position. Same with your race kit. Why not try them out before spending two to 12 hours in them on race day?

The racing question brings up another contradiction. Triathletes seem to think a certain level of preparedness is allowed, but if you prepare too much, it’s dorky. Why is this? If I wear my race chip before my race because I want to make sure I don’t forget it on race day, it’s dorky. If I mark my transition spot with a balloon—even if it’s a Chuck Norris balloon—it’s dorky. If I wear a second watch in case one breaks, that’s also dorky? (OK, that is dorky.) But still, I’ve never heard anyone say packing my transition bag before race day is dorky, or sleeping enough, or laying out my clothes in anatomical position on the floor like I was lying there and then vanished, is dorky. What’s the difference? Either way, I’m preparing for a race and trying to take things off my mind. Guilty as charged! According to the responses, there’s a threshold of allowable equipment expense, and this threshold varies given your speed during competition. Basically, the faster you are, the more you are allowed to spend on equipment without risking dorkiness. For example: Super-slow guy with a bit of a beer belly who doesn’t train much but has a super nice bike, wetsuit and cryogenic muscle-freezing chamber is the king of dorkiness. And according to the data, the opposite is also true—you can be super-cool if you are both fast and your equipment is old and crappy. So if you show up and win a big race on a borrowed bike, eating PB&J sandwiches, wearing a hand-me-down kit and drugstore aviators, you’re supposedly really cool? I hate to break it to you guys, but I know a guy who did that, and he’s the biggest dork I know.

Since becoming super-fast on crappy equipment sounds really hard, it’s important we identify a few less difficult ways to increase our coolness score. According to my survey, there is nothing tri-cooler than embracing the fact that you are a tri-dork. It’s still unclear to me if owning your tri-dorkiness erases it or just builds tri-coolness, but either way it’s probably the easiest way to balance the scale. It’s like a habit that at first was annoying but then becomes “lovable.” Like how Robin Williams describes his wife’s midnight farts in “Goodwill Hunting.”

If you are considered an “OverAger” (thank you @BendMichael for the term), someone who is high on the price of equipment-to-speed ratio, it seems that this is an ideal opportunity for you. I know a number of athletes who are fortunate enough to afford nice equipment, and don’t have the time to train a lot (often the reason they can afford nice stuff). But the coolest of those people are aware of, and embrace, the discrepancy. They are self-professed tri-dorks. No different than a CEO who loves (and sucks at) basketball, but has season tickets to the Lakers. You don’t have to be good to support the industry in whatever way you can.

Probably the easiest way to build cool points is by being nice. Sounds tough, right? Things that go a long way: cheering for other competitors, thanking volunteers, and even mustering a smile while you’re out racing. I couldn’t agree with this more. I think it’s easy for all of us triathletes to be so internally focused on our own goals that we forget there’s a whole world of people directly or indirectly supporting our pursuit of those goals. These other people on the start line have put in their own level of dedication and effort into achieving their own goal. What’s cooler than supporting all these people with a small bit of encouragement and gratitude? In my experience, one of the biggest benefits of doing so is the goodness you feel while doing it actually makes you race faster!

According to you guys, few things are cooler than finishing your race when the going gets bad. Triathletes love a struggle. It makes sense—look at what we do. It’s arguably the most demanding physical sport on the planet. So much so, that in many cases, finishing is just as amazing an accomplishment as winning. I totally agree with this sentiment. Nothing is more inspiring to me than watching the last finishers of any distance race struggle across the line, legs buckling in salt-crusted jerseys with tears in their eyes. I’ve noticed in my own writing that the races where I implode and still finish get bigger/stronger/better responses than my biggest victories. It’s a microcosm of the human experience—dealing with difficulty and overcoming adversity. To a certain extent, it’s why we all race. It’s practice for life.

It’s easy to get caught up in our little world (what?!) of triathlon, talking about the relative dorkiness of specific activities and attire choices. But I’ve got news for you guys. According to the 99.9 percent of the population outside of the sport, we’re all big ’ol dorks. The coolest triathlete out there hovers somewhere between captain of the chess club and Steve Urkel on the world scale of coolness. Don’t worry—I don’t think it’s entirely our faults. It’s the nature of our sport, being the outcasts of not one but three more popular and established sports. That’s a lot of nerds jockeying for position.

I think it’s best that we all just give into it and embrace the dorkiness that makes us triathletes. So the next time you see a dude pull up to a group ride in an aero helmet and compression socks in a sleeveless tri kit and arm warmers, say, “What’s up, Jesse? Any chance you’ve got an extra Garmin I could borrow?” Chances are, I’ve brought three.

Jesse Thomas (@jessemthomas) is the 2011 and 2012 Wildflower Long Course champion. He lives in Springfield, Ore., and is the CEO of Picky Bars (Pickybars.com).