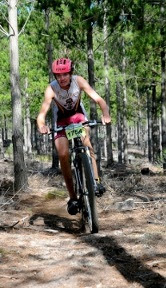 Totalsports Xterra Grabouw full race, 2013 Highlights
Sunday the 24th of February, Triathletes gather in Grabouw for the South African Championships. Here is some of the action from the day!

According to Lord the TOTALSPORTS XTERRA Lite is exactly what a triathlon should be like. “The route is really nice. The mountain bike is fast while the run is rough, challenging and fun. It’s a proper run course. I was hoping to run the entire run course with my dog, Shenzi, but my mom didn’t hear me. So she only let Shenzi go on the last part of the run course. I’ll definitely be back next year,” says Lord. Matthew Lombardi came in second, while Dawie Carstens finished third.

XTERRA Warriors taking part in the TOTALSPORTS XTERRA Grabouw Lite presented by REHIDRAT® SPORT had to complete a 400m swim followed by a 12km mountain bike and finally a 5km trail run.

TOTALSPORTS XTERRA KIDS ~ Just over 100 XTERRA warriors in the making were seen in action in Grabouw on Friday, 22 February 2013 at the inaugural TOTALSPORTS XTERRA KIDS presented by REHIDRAT® SPORT. According to Caroline Wyatt, Organiser of the TOTALSPORTS XTERRA KIDS Race, the turn out on the day was phenomenal. “Today’s event was a huge success. I spoke to a number of the parents afterwards and they said that their children are raving about the event and cannot wait for the next one. We made sure that the route was challenging enough, but not too long as most of the children have never been off-road. We definitely want to grow the event, but most probably with a limit of 250 entrants. Eventually it would be great to have a series. The TOTALSPORTS XTERRA KIDS Race is purely about enjoyment. We aim to expose children to a different, healthier way of life,” says Wyatt.


It is once again an honour welcoming Dave Nicholas, Managing Director of the XTERRA World Tour, to the TOTALSPORTS XTERRA Grabouw presented by REHIDRAT® SPORT. According to Nicholas, Olympian Richard Murray will most definitely be the dark horse going into Sunday’s race. “When coming from a road background, the triathlete is usually tentative on the mountain bike discipline. Richard Murray, however, originally comes from a mountain bike background so it’s going to be interesting watching him in action,” says Nicholas.