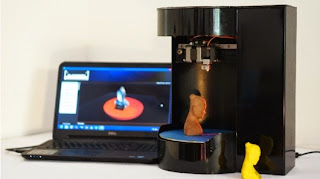 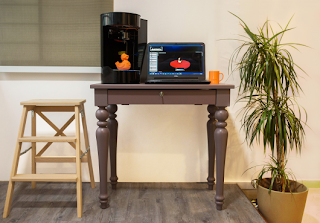 Blacksmith Genesis has 3D-scanning and printing in a spin

By Richard Moss August 17, 2014
The Blacksmith Genesis all-in-one 3D printer, scanner, and copier boasts a compact size and simple operation thanks to its use of a rotary platform

3D printing may be one of the few technologies that actually holds a solid claim to the over-used adjectives "disruptive" and "world-changing," but its bulky hardware and complicated operation still largely limits its appeal to a market of enthusiasts and experts. Blacksmith, a startup from Nanyang Technological University in Singapore, hopes to give 3D printing more mass market appeal with the Blacksmith Genesisa, a new all-in-one 3D printer, scanner, and copier that handles all of the tedious and tricky parts of the process for you.

The Blacksmith Genesis can handle fine detail and complex shapes and texturesThe Blacksmith Genesis looks a little like a coffee machine and takes only a small spatial...Blacksmith bundles a web-based 3D scanning and modelling app to help beginners get the mos...The Blacksmith Genesis doesn't take up much space or look especially out of place in an or...View all
Whereas most existing commercial 3D printers use a Cartesian coordinates system, sliding inflexibly in flat planes, the diminutive Genesis – which is slightly taller than a conventional home printer and has base dimensions slightly larger than US legal paper – functions in a manner similar to a record player – with a revolving platform that rotates the object being scanned or printed.

This allows for a much smaller machine size proportional to the print/scan area and saves time during the print process as the extruder (which deposits the filament used to build objects) both travels and stops less frequently.

Its creators' claim that the Genesis is the first commercial 3D printer to use a rotary platform may be a bit of a stretch, however. Replicator Warehouse's R-360 uses a similar revolving platform for printing and scanning, albeit with a third-party sensor needed for the latter purpose, while LMI Technologies' HDI 3D scanner can also be set up to use a rotary table. The record player metaphor was further developed in the open-source Theta Printer, too, which uses four extruders to provide different colors and materials and offers nearly double the print area of the Genesis.

And a more experimental project called Polar Automation goes further still, with two rotating platters (disks) that move the object around for high-resolution scanning, printing, and milling (cutting or removing material to form a particular shape).

The Blacksmith Genesis looks a little like a coffee machine and takes only a small spatial...
Blacksmith Genesis aims to be different in that it comes pre-built, fits comfortably alongside your desktop computer, and requires minimal technical know-how to use.

"Our users won't need to design an original work from scratch using 3D software," explains Blacksmith chief executive officer Fang Kok Boon. "By scanning any physical item, the digitized object can be used as a base for them to customize or even combine with other existing models to form their own 3D object."

Objects of up to 21 cm (8.3 in) in diameter and 16 cm (6.3 in) in height can be scanned with the device, while printed dimensions can be up to 23 cm (9.1 in) across and 16 cm high with a layer resolution of 50-200 microns. A built-in 3.1-megapixel camera also checks for errors and lets you monitor builds via your smartphone or tablet.

The device itself measures 35 x 25 x 41 cm (13.8 x 9.8 x 16.1 in) and weighs 11 kg (24 lb). It boasts support for .STL and .OBJ file types for printing and scanning, with the included Blacksmith Sorcerer software also supporting .BS files and running on any operating system as it is Web-based. Connectivity is currently limited to USB and SD cards, with the team planning to add Wi-Fi connectivity in the future.

Would-be buyers can pledge US$1,395 for a "batch 1" unit, whether the US$75,000 Indiegogo campaign reaches its target or not (as it's using the "flexible funding" model that means all money raised goes to the campaign organizer regardless of how the total stacks up against the target). If all goes to plan, deliveries are expected for early 2015 and free shipping promised to 70 countries. 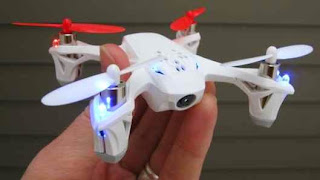 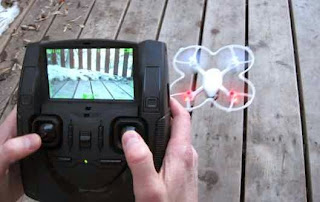 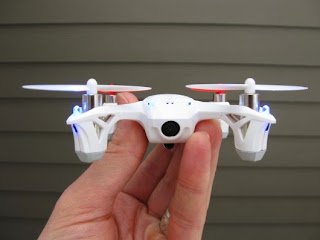 It was just a few months ago that we showed you what is probably the world's smallest consumer quadcopter, the tiny Estes Proto X. Although it's a marvel of modern engineering, Gizmag writer Jonathan Fincher noted that it lacks any particularly interesting features, such as a camera. Well, late last year, Hubsan released its X4 H107D FPV. It's not much bigger than the Proto X, and it has a camera that transmits a real-time video signal to the user. When I heard about it, I knew I had to try it out.

The FPV as it comes out of the box, with its charging cable and spare props A front view of the FPV The problematic battery wiresThe camera lens, which could stand to be a little wider View all
The eye in the sky
Hubsan's other X4 quadcopters have already proven quite popular with hobbyists. The previously-released H107C model also has a camera, although it doesn't provide a live feed. Instead, users have to watch the recorded footage after the fact.

With the FPV, however, they can see what the camera's seeing as it sees it, via a 4.3-inch color LCD screen in the control unit. This makes it possible to fly by first-person-view (hence the FPV in its name), although a wider lens would make doing so considerably easier. It's also possible to start and stop recording via a single button on the controller.

The controller receives a real-time video feed from the quadcopter
The camera itself is nothing special, with its 0.3-megapixel sensor and 640 x 480 resolution. Although the picture is displayed on the monitor at 720 x 480, it's rather bizarrely recorded at a squat 720 x 240. This means that if you plan on using the recorded footage for anything, you'll have to run it through a converter to stretch it from 240 to 480. While Hubsan does provide links to a couple of free Windows-based converters, I couldn't find any aspect ratio-altering freeware that would work on my Mac. Eventually, I gave in and purchased AnyVideo Converter HD for six bucks, although I really shouldn't have had to.

Additionally, depending on where you're flying it, the video can get quite glitchy by the time it reaches the monitor. This might not matter if it were recorded onboard the quadcopter, but it's not. Instead, it's recorded on a Micro SD card in the controller, meaning that all the glitches are present in the video by the time it's recorded. That said, most users will probably be more interested in using the camera just to fly the thing.

The quadcopter itself
A front view of the FPV
The FPV measures about 4.5 inches (114 mm) diagonally, looks beautiful, and feels nice and solid in hand. One charge of its 3.7-volt 380-mAh lithium polymer battery takes about 30 minutes via an included USB cable (which can be difficult to disconnect), and is good for around seven minutes of flight time. This means that learning to fly the thing has to be done in numerous short installments.

Once the battery is juiced up, its charging receptacle wire has to be sort of twisted around, folded over, and stuffed into a little compartment in the back of the aircraft. It's hard getting it to stay in there, however, plus my copter has developed a short in that wire from all the manipulation. It would be far better if there were simply a clip or something similar to hold the wire in place, without placing so much stress on it.

Taking it up
As for actually flying the sucker ... well, a search on YouTube will show you that there are plenty of experienced RC aircraft hobbyists out there who are quite adept at piloting the FPV. My only previous quadcopter experience has been with the DJI Phantom and Phantom 2 Vision, and while they're certainly more intimidating to fly (because they're so big and expensive), they're also a lot easier. This is mainly due to the fact that they both use GPS to hold their position in mid-air.

The FPV (fortunately) is fairly crash-worthy
The GPS-less FPV, on the other hand, tends to drift around quite a bit. Although it's certainly possible to get it to go more or less where I want, I find that a lot of the time, flying it is almost like a game – it routinely tries to head off in one random direction or another, and it's my job to keep it from doing so. Keeping it hovering in one place is pretty much out of the question.

This is doubtless doing wonders for my hand-eye coordination, but it can be a little frustrating at times. I've only had it a few weeks so far, though, so hopefully my skills will improve. In the meantime, it's a good thing that the FPV is so tough. I've crashed it more times than I could possibly remember, and the only visible damage has been some bashed-up propellers (I'm currently on my second set). That did prompt me to install its prop guard, although that itself has already snapped in one spot.

The claimed maximum control and video range is 100 meters (328 ft), although I've yet to put that to the test. I have tried taking the quadcopter outside, but it's pretty easily pushed around by even moderate winds.

Shelling out
Yes, this shot would have looked better with the FPV in flight, but that would have been a...
The X4 FPV sells for around US$200. Is it worth it? I would say yes, provided that:
You don't plan on using the video for anything other than FPV flying
You take it easy on the battery wire
You don't expect to be an expert pilot right away
You're not buying it because you think that it'll be easier to fly than one of the "big boys" (although it's not as big of a deal when you crash it)
Speaking of fancier quadcopters, a Hubsan rep has informed me that the company is developing a "better, larger" X4 that will supposedly offer more functions than the DJI Phantom 2 Vision. It might be coming our way in March, so we look forward to getting our hands on it.

For now, though, you can check out the short-but-sweet video below, in which my friend Kevin and I give the FPV a whirl in a warehouse ... and despite the way it's edited, I must admit that it was actually me who was flying it in the final shot.