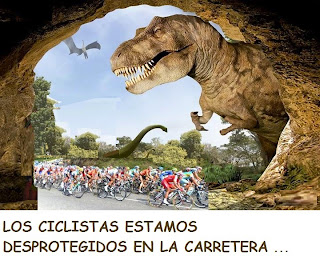 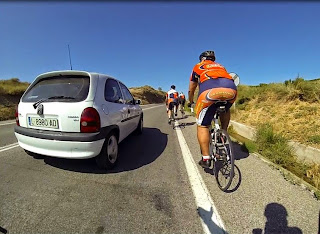 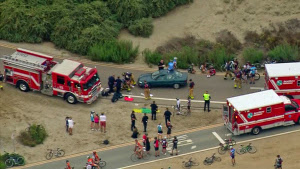 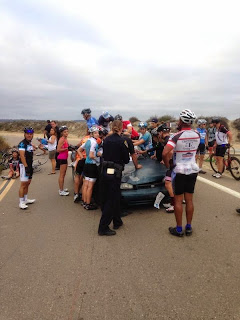 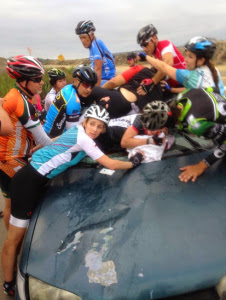 8 Cyclists Injured When Alleged DUI Wrong-Way Driver Plows Into Group in San Diego
POSTED 11:40 AM, AUGUST 13, 2014, BY MELISSA PAMER
Eight bicyclists were injured when a suspected DUI wrong-way driver plowed into a group riding on Fiesta Island in San Diego on Tuesday night, according to police.

Authorities responded to San Diego’s Fiesta Island on Aug. 12, 2014, where eight cyclists were hurt when a wrong-way driver crashed into them.(Credit: KSWB)
The driver, identified as 49-year-old Theresa Owens, 49, was evaluated at a hospital and then arrested on suspicion of driving under the influence, the San Diego Union-Tribune reported .

Fiesta Island Road is one-way throughout the island, which is a park within Mission Bay. It is regarded by cyclists as an especially safe place to ride.


A Geo Prizm that struck a group of cyclists, injuring eight, was left with damage on San Diego’s Fiesta Island Aug. 12, 2014. (Credit: KSWB)
A group of 20 cyclists was riding when the driver hit the riders head-on in her Geo Prizm, according to San Diego Police Department Officer Dino Delimitros.Mangled bikes were left by the side of the roadway. The Prizm had a smashed windshield and damage to its hood and front bumper, video from the scene showed.The cyclists did not see the car coming because it was headed around a blind corner, police on scene told KTLA sister station KSWB.“It was just bikes flying everywhere,” said Joel Price, one of the cyclists. “Hit head on. … She had three people pinned on top of her car.”
)
Witness and cyclist Joel Price took this photo of the scene after the Aug 12, 2014, crash on Fiesta Island. (Credit: Joel Price)
Price flew over his handlebars but had only minor injuries, he said on Twitter. He called Fiesta Island one of San Diego’s safest places to ride a bike.One rider had broken ribs, a major vertebrae fracture and internal injuries, Delimitros said in a brief description of the crash provided by police. Others had minor or moderate injures, he wrote.Owens was booked by police about 2:30 a.m. Wednesday and was due in court for arraignment Friday, according to the San Diego County Sheriff’s Department online inmate website.She was being held on $100,000 bail on suspicion of driving under the influence, possession of a controlled substance, and being under the influence of a controlled substance.
http://ktla.com/2014/08/13/8-cyclists-injured-when-alleged-dui-wrong-way-driver-plows-into-group-in-san-diego/

Critical Condition
Juan Carlos Vinolo will be paralyzed from the chest down, his wife tells NBC 7
By Sherene Tagharobi and R. Stickney


San Diego's cycling community is rallying around a man who is now paralyzed after pushing a fellow rider out of the path of a wrong-way driver. “He saved his life and he got all the damage,” Emma Irarragorri said of her husband who is in critical condition and paralyzed from the chest down. “He’s always been a hero to me,” she said tearfully. “He’s going to be a hero to his kids.”
ME Report: UCSD Student Died of Overdose
Juan Carlos Vinolo, 49, of La Jolla, is always obsessed with safety when he rides his bicycle, his wife said as she shared images of him with NBC 7 Friday.The father of two was with members of the San Diego Bicycle Club Tuesday when a wrong-way driver headed straight for the group of approximately 30 cyclists as they traveled on Fiesta Island earlier this week.Irarragorri said her husband was second in the pack when he saw the car coming and instinctively pushed the leader out of harm's way.
The impact of the crash shattered the car's windshield and sent at least 10 cyclists to the hospital with injuries ranging from facial cuts to bruised ribs. Other riders suffered bike damage and scrapes and bruises.

Vinolo was the most seriously injured of the group with two punctured lungs, several broken ribs and a left clavicle, dislocated left shoulder, loss of one kidney, laceration of the spleen and six broken vertebras resulting in a spinal cord injury according to an online fundraising effort to help pay for medical costs."It’s like you’re sleeping and it’s a nightmare and you cannot get out of it," Irarragorri said.
Cyclists Recovering After Fiesta Island Crash
Irarragorri said doctors at UCSD Hillcrest Hospital are focusing on healing the lungs so her husband can undergo spinal surgery.
“He’s devastated,” she said, adding that Vinolo wants the “opportunity to rebuild our lives, his life, with his kids, with me and get back everything we have lost.”However, doctors have cautioned the couple that the recovery process will be long.
"It’s not a race it’s going to be a marathon for years and years to come," she said.
Images: Car Drives into Group of Cyclists on Fiesta Island Images: Car Drives into Group of Cyclists on Fiesta Island
In Pacific Beach, Logan Bass has just returned home from two days in the hospital. Cycling is so important to him that he recently relocated to San Diego just so he could ride his bike here.
On Tuesday he was leading his cycling teammates in the front of the pack when a wrong-way driver came around the corner.
"The hood was coming right at me," he said. "Instinct just got me to turn out of the way just enough."
He immediately turned left, knocked another rider into the grass and fell to the ground. After hitting the pavement, he looked back and saw Vinolo on top of the car. Another teammate, Beatrice Dormoy was on the car's windshield. Bikes and riders were everywhere.
Dormoy suffered facial cuts and bruises and was released from the hospital Wednesday.
Cyclist Crash Victim's Husband Wants Driver Punished
Bass had been clipped by the front end of the car and suffered a contusion to his ribs, road rash on his elbow and a cut on his foot."I looked down and noticed I didn't have a shoe on and noticed there was blood where I was walking," he said.
He was hospitalized for two days while doctors ran tests. They cleared him to return home once they established that he had not suffered a punctured lung.Bass said he and others involved in the crash are most concerned about Vinolo.
"I just hope he makes it through. He's fighting for his life right now," he said.
"Every hour's a battle."
He has donated to Vinolo's GoFundMe page and he wants to encourage others to help.
Driver in Fiesta Island Crash Arrested
On Friday, Bass also planned to attend the arraignment for Theresa Lynn Owens, 49, the woman arrested and charged with driving under the influence and possession of a controlled substance.Cyclists have only a helmet and a jersey for protection, he said, and he wants drivers to consider the safety of others on the road when they get behind the wheel.
Most of the cyclists involved in the crash are members of the San Diego Bicycle Club. They meet every Tuesday to ride about 30 miles together and had been finishing their final laps when the collision occurred.
The group said the incident is especially unfortunate because Fiesta Island is supposed to be a very safe place for them to ride. 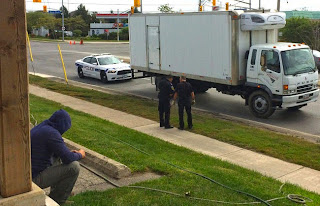 A cyclist, 69, was killed Friday morning when he collided with a truck at a Mississauga intersection. The truck's driver was visibly distraught as Peel Regional Police investigated. (CHRIS DOUCETTE/Toronto Sun)


TORONTO - A 69-year-old cyclist was killed when he was struck by a truck in a Mississauga intersection Friday morning.

Peel Regional Police say the man on the bike collided with the straight truck at Central Pkwy. and Mavis Rd. shortly after 8 a.m.
The truck driver, who was visibly distraught, remained at the scene.“The cyclist was vital signs absent when paramedics arrived,” Const. Fiona Thivierge said at the scene Friday. “They worked on him as they rushed him to hospital but he was pronounced dead about an hour later.”The victim’s name was not immediately released.

Peel’s Major Collision Bureau is investigating the fatality but no charges have been laid at this point.Thivierge said investigators are interested in talking to witnesses who have not yet spoken to police.Anyone with information regarding the deadly collision is urged to call investigators at 905-453-2121, ext. 3710, or Crime Stoppers at 1-800-222-TIPS (8477).