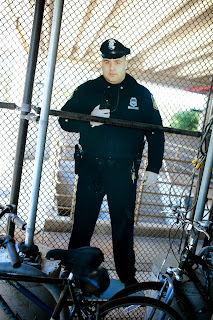 Is it a cop? Is it a box? Actually, it's both. CardboCop credited with lowering bike thefts
Not so much plastic policeman as cardboard bobby in Boston, USA - but it does seem to work

Bike thieves. They might be crafty, but, it seems, they’re none too observant.

In Boston, USA, a cardboard cut out of a police officer - dubbed CardboCop - gas been credited with a 67 per cent decrease in bike thefts since he’s been positioned near a hotspot for pinched rides.

The only real thing about CardboCop is his face - the likeness of Transport Officer David Silen.

“I think it’s our inner conscience. Even though they know that it’s not a real cop, there is some psychology at work. People realize it’s a cutout, but there is still a set of eyes in a blue uniform,” Transit Police Deputy Chief Robert Lenehan told the Washington Post.

Now, there are plans to replicated CardboCop at three other locations in the city.

It’s a different approach to that taken by police in Islington, one of London’s crime hotspots, where last year we reported police credited tough policing and education with an eight per cent drop in thefts.

bike being stolen in Norwich city centre in just six seconds, without the thief even needing tools.

Guy finds stolen bike on Craigslist 160 miles away, sets up home-made sting, confronts the thief and gets his bicycle back, thief gets felony arrest.

Update: The bike was locked up with a mid-range Kryptonite U-Lock, the thief broke the lock. The lock was never recovered.

We called the cops just before Simon started talking with the thief. It took Seattle PD 45 minutes to get there. Simon decided to confront him when they neglected to show up. Once he did, however, they rolled up as you can see in the video.
disclaimer: i do not own this video

Scumbag Bike Thief Caught On Camera
was awakened at 5AM by a loud metallic clanging outside my window. When I looked out I saw this douchebag sawing and smashing at a bike lock across the street. So I called the cops and videotaped what was happening. When he goes for a smoke break, then returns to working on the lock, the police roll up. Classic.
(No, I was not about to run outside and tackle the guy, risking injury to myself, while I was half-asleep at 5AM and not wearing anything, and only wanted to go back to bed. It was also definitely not his bike, the police told me he admitted that right away, and they said I did the right thing by calling them, and he was "known" to them)