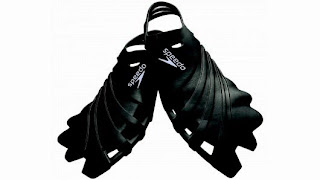 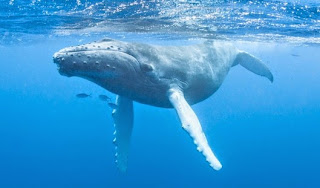 A humpback whale, sporting its own tubercles (Photo: Shutterstock)


Nemesis Fins are designed to let you swim like a whale ... sort of

If you've ever seen a humpback whale's fins, you might have noticed that they have knobby bits along the front edge. These are known as tubercles, and they cause the water to flow over the fins in such a way that extra lift is created. They've been copied in efforts to produce better wind turbines, undersea turbines, helicopter rotor blades ... and now, Speedo swim fins.Known as Nemesis Fins, the whale-inspired footwear features a series of man-made tubercles along the outside edge of each fin. According to Speedo, this design creates more surface area for the water to pass over (as opposed to a straight edge), thus allowing the swimmer to go faster by pushing more water with every kick.

The square openings along their inside edges are called blow valves, and they're larger on the underside of the fin than they are on the top. Reportedly, this means that water gets trapped on the underside and squeezed through the openings, resulting in increased propulsion via more resistance on down-kicks.Flow channels along the surface of the fins help guide the water toward those blow valves.Finally, the use of EVA foam in their construction makes the fins positively buoyant. This feature is said to help the swimmer maintain an elevated, more streamlined body position.A Speedo representative tells us that the Nemesis Fins are available now in limited quantities at select shops, priced at US$39.99. They can also be pre-ordered via the first link below.