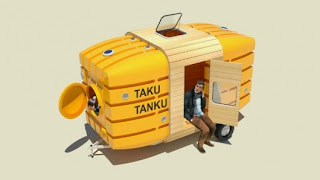 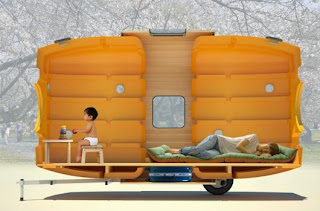 RCHITECTURE
Taku-Tanku portable tiny house can be towed by bike

The tiny house movement is as much about lifestyle as it is size of dwelling. Simplicity and efficiency are key characteristics of such a house. Not only is Stereotank's Taku-Tanku very small, it has few components, can be easily assembled, and even towed by a bicycle.

The Taku-Tanku can accommodate two to three people and has a compartment to store some lug...The Taku-Tanku can be pulled by hand or towed by bikeA wooden ring joins the two water tank sections whilst a two-wheeled trailer is used to tr...Stereotank says the Taku-Tanku is easy to build with off-the-shelf and re-purposed materia...View all
Gizmag has featured a number of other portable tiny houses. The Leaf House, for example, is small enough to tow with a car but can still accommodate a family of four, whilst the Salsa Box is smaller, but squeezes a huge amount into 9 sq m (96 sq ft). The Taku-Tanku is similar in size to the Salsa Box, but is much less palatial.

The design, created by Stereotank in collaboration with Takahiro Fukuda, was created for the Little House Competition in Saitama, Japan, earlier this year. It is made primarily of two 3,000 l (670 gal) water tanks that are connected by a ring of wood. In addition to joining the two tanks, the wooden ring also incorporates an entrance and a skylight.

The house sits on a two-wheeled trailer and Stereotank says it is light enough to to be pulled along by one or two people or towed by a bicycle. It can also be towed by a car or even, the company suggests, by a boat.

The Taku-Tanku can be pulled by hand or towed by bike
Stereotank is in the process of looking for a sponsor to fund a prototype of the Taku-Tanku. It is expected that a first prototype would cost in the region of US$8,000 to $10,000. 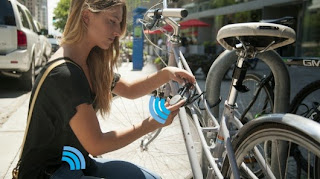 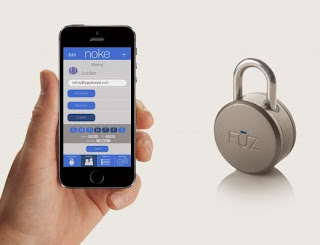 Noke padlock trades in keys and combos for Bluetooth


The Noke unlocks in response to a user-specific Bluetooth signal

There are already door locks and bicycle U-locks that are activated by Bluetooth, but Utah-based FŪZ Designs claims that its Noke is the world's first Bluetooth padlock. Like its house- and bike-specific counterparts, the Noke forgoes a physical key or combination dial, and instead unlocks when it detects the Bluetooth signal from an approved user's smartphone.

According to the guys at FŪZ, there are several advantages to going Bluetooth.

For one thing, you don't need to worry about losing a key or forgetting a combination. Should you forget your phone or if its battery dies, you can still unlock the Noke by tapping its shackle in a Morse code-like pattern that's unique to that lock.

Also, using the accompanying iOS/Android app, you can remotely grant full-time, one-time or scheduled unlocking privileges to other peoples' phones. This could come in handy when various co-workers or family members regularly need to use a locked item, or when people such as house-sitters require access to things like garden sheds.

Using the accompanying iOS/Android app, you can remotely grant full-time, one-time or sche...
Users will be notified via the app when the Noke's battery starts to get low, which should reportedly occur less than once a year. If the battery completely dies, it's possible to replace it with the lock still in place. The lock itself is made from boron and hardened steel, and is water-resistant.

FŪZ is currently raising production funds for the Noke, on Kickstarter. A pledge of US$59 will get you one, when and if they're ready to go. The planned retail price is $89. More information is available in the pitch video below.

... and while the Noke may end up being the world's first commercially-available Bluetooth padlock, it won't necessarily be the first one ever made. The Teo lock is also currently in prototype form and was the subject of an unsuccessful Kickstarter campaign of its own, earlier this year.