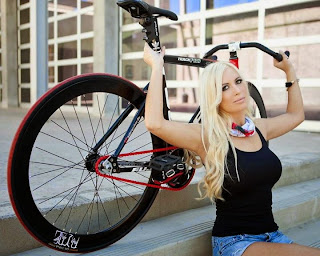 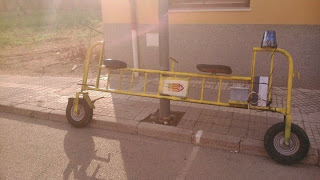 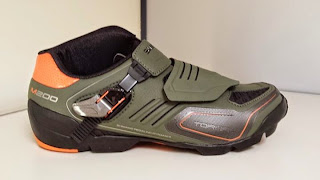 Ruben Ruzafa Cueto – bike is my strongest discipline in cross triathlon
Published August 11, 2014
XTERRA World Champion 2013 and 2008 and Vice Champion ITU World Cross Triathlon in 2013
Rubén Ruzafa (Team TRIATLON COLEGIO AÑORETA NOVASCHOOL), aged 29, has twice been crowned XTERRA World Champion (in 2013 and 2008) and came second at the ITU World Cross Triathlon in 2013. Born in Málaga (Spain), Rubén Ruzafa had a successful mountain bike career before becoming a world-famous cross triathlete, and first competed in Zittau in 2013. Asked about the fascination of cross triathlon, Ruzafa declared: “Each race is an adventure!” Read the whole interview here:

1. What do you find so fascinating about cross triathlon?
I like the contact with nature. Each race is an adventure.


3. What have been the highlights of your sporting career?

5. What’s your aim at the World Championships?
Give my best and get the best position as my body can give.

6. Are you familiar with the Zittau region? If so, what do you associate with it?
Yes I came last year. I associate Zittau with a beautiful and peacefull place.
Excellent for mountain biking, hiking, running…

Stage is Set in Zittau

August 15, 2014/in All, Triathlon /
Tomorrow is a big day for the sport of off-road triathlon as the XTERRA Germany Championship – doubling as the fourth annual ITU Cross Triathlon World Championship – unfolds in the foothills of the Zittau Mountains.The event has attracted a stellar elite field, arguably the toughest outside of the XTERRA World Championship. Consider this … Ruben Ruzafa and Jacqui Slack won at XTERRA Germany last year. Asa Shaw and Helena Erbenova won on this course in 2012. Renata Bucher won in Zittau in 2009. All of them are on the start list, as are the top 13 men and top seven women in the current XTERRA European Tour standings.

Leonardo Chacon from Costa Rica – who was brilliant in winning the XTERRA USA Championship last season and took down a tough field in his home country this year – is on the list and so is Kiwi Braden Currie, who has given Ruzafa all he can handle in Europe and won XTERRA Sweden last month. South Africa’s Brad Weiss hasn’t won a major yet but he’s been in the top four at a dozen races with stacked fields over the past year.The men’s start list also includes 2011 XTERRA World Champ Michi Weiss in his first XTERRA race since receiving a two-year suspension from competition by Austria’s NADA; and Ironman star Faris Al-Sultan.

Perhaps the most notably missing from the star-studded line-up for the men is South African Dan Hugo, winner of seven XTERRA World Tour championships this season, and for the women – Nicky Samuels, the defending women’s world champion (and certainly Lesley Paterson who has not raced this season).Even with all those big names, the story line has to be carried by “The Caveman” Conrad Stoltz and the Spaniard Ruben Ruzafa.Stoltz has won all three ITU Cross Tri World Titles so far – 2011 in Spain, 2012 in the U.S., and last year in the Netherlands. He’s XTERRA’s all-time winningest pro with an unprecedented 49 championship titles and four XTERRA World Championships.

Then you have Ruzafa, winner of six straight on the European Tour and the defending (and two-time) XTERRA World Champion.Team USA looks to reigning XTERRA U.S. Pro Series Champ and 9x National Champ Josiah Middaugh, buoyed by American greats Branden Rakita, Craig Evans, and Will Kelsay.The women’s elite team is led by Emma Garrard, 2012 National Champ Suzie Snyder, and Caroline Colonna.The focus for the women, however, will be on Flora Duffy from Bermuda. Duffy has been perfect in 2014, winning XTERRA titles at XTERRA South Africa, the XTERRA West, Southeast, and East Regionals in the U.S., and taking down Samuels at the inaugural XTERRA Asia-Pacific Championship in New South Wales, Australia.

Duffy hasn’t raced against Europe’s best yet, however, and leading that charge is Kathrin Mueller – the lone elite women’s representative from the host country of Germany. Mueller has won four majors on the Euro Tour this season, leading Helena Erbenova (three wins this year) who is a two-time Euro Tour and the reigning ITU Cross Triathlon World Champion.

The women’s start list is strengthened by the likes of Aussie Olympian Erin Densham, and European Tour standouts Carina Wasle, Renata Bucher, and Jacqui Slack, Canadian Chantell Widney (recent winner of the XTERRA Mountain Championship), and South Africa’s Carla Van Huysteen.Rain and thunder is in the forecast for tomorrow’s race … and you can count on the competition being electric. See complete start lists and find results at:
http://www.triathlon.org/events/event/2014_zittau_itu_cross_triathlon_word_championships

XTERRA’s managing director “Kahuna Dave” Nicholas is in Zittau for the XTERRA Germany Championship and also serving as the captain for Team USA’s efforts in the ITU Cross Tri World Championship.

He filed this report on the eve of the race…

Wow. The former East German city of Zittau has never seen this kind of spirit. Hundreds of mountain bikes with thin, fit, uniformed riders bombing around town, zipping in and out of restaurants and shops.Packet pickup was to open today at 1pm but the crowd was anxious and the tent walls were pulled back about 15 minutes early. A dozen food vendors with everything from wurst to pizza to soft ice cream and crepes were ready. Yes, several beer tents were open and doing fine business.

Rain ruined a bit of the day, but by the time the pasta party opened at 5pm followed by the parade of nations and opening ceremony it was cool but not raining. A swanky VIP party where all the Elite athletes were invited, a fabulous rhythm drum band marched the hall, speeches and the Secretary General of the State of Saxony declared the games open. One hell of a way to open the 2014 ITU Cross Triathlon World Championships and XTERRA Germany and O See Challenge.

The field for both men and women is definitely world championship quality. Conrad “The Caveman” Stoltz will be looking for his 4th ITU in a row; Ruben Ruzafa has not been defeated since Maui. Former World Champion and 70.3 star Michi Weiss is here to represent Austria, the man who led Maui for better than half; Leo Chacon is here with his Costa Rican teammate Rom Akerson. That would make a world class field by itself, but add Ben Allen, Francois Carloni, Kris Coddens, Brice Daubord, Ironman star Faris-Al Sultan, German champion Felix Schumann, Asa Shaw, Jan Kubicek, veteran Rob Barel and Americans Josiah Middaugh, Craig Evans, Will Kelsay, and Branden Rakita – whew – you see what I mean.

It is no less impressive for the women starting with German favorite Kathrin Mueller who has gotten big press this week. She faces Aussie super star Erin Densham, many time XTERRA winner Helena Erbenova and the super-fast Flora Duffy. Bring to the start line last year’s winner Jacqui Slack, Canadian Chantell Widney, Carina Wasle, Renata Bucher and Americans Emma Garrard and Suzie Snyder with another bunch like Maud Golsteyn and Carla Van Huysteen and this is a star-studded women’s field.The course is fast with a fair amount of flat, a lot at the start. Those quick swimmers could make a deal among themselves and team time trial the first 5K to try and gap the field. OR, those in the second pack could team up, draft those first few miles and bridge it up to the swimmers.

The weather will play a big part. It is muddy and wet out there but tonight’s wind could dry it out a bit. Rain is forecast and if it happens, the technical riders will dominate on the slippery rocks and roots. Age groupers head out at 9:30 with women and then two waves of men. Our XTERRA Age Group champions are here and I expect them to dominate the medals.

Elite women start at 2:15 and the men at 2:35. I warned the organizers that the fast men are going to have to weave their way through – but it fell on deaf ears.No matter what – the rain, the cold, dry or wet, traffic or not – tomorrow will have a series of great battles and the winner will have given his or her all. 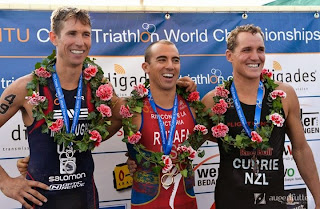 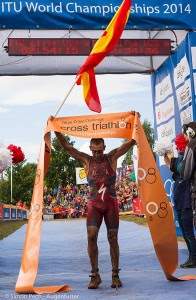 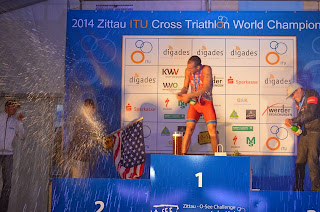 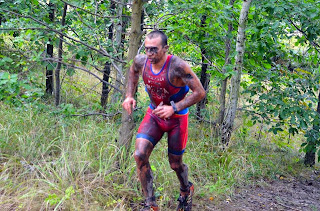 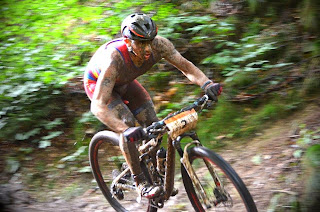 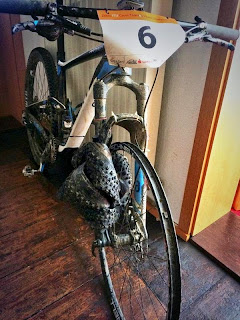 The only German woman in the elite category is the new ITU-Cross Triathlon world champion. The 30 year old women won the title with a lead of 2 minutes before the vice champion Flora Duffy (Bermuda). The world champion of 2013, Helena Erbenová (Czeche Republic) finished as the third woman.

The new ITU-Cross Triathlon world champion among the male athletes is Rubén Ruzafa. The 29-year old Spanish athlete had become vice world champion of the ITU Cross Triathlon World Championship in Den Haag in 2013. Hence, the triple World Champion Conrad Stoltz, who reached the finish line as the eigth this yers has ceded the titel to Ruzafa. The vice champion of 2014 is Josiah Middaugh (USA). The third athlete who finished the race was Braden Currie (New Zealand).

The complete list of results can be found here. 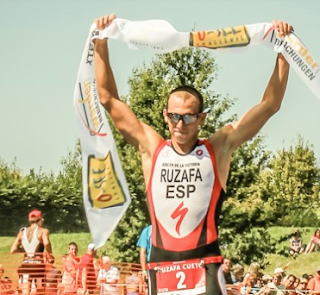 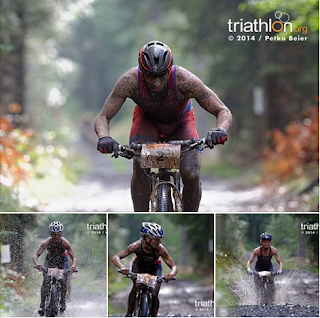 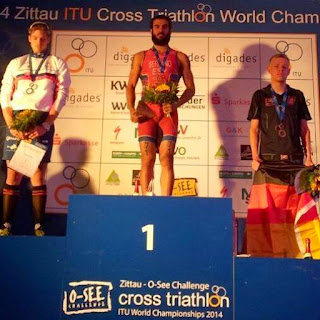