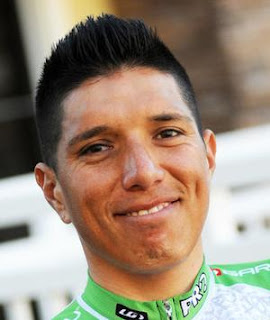 Such sad news. Rider for the Bahati Foundation Cycling team, Jorge Alvarado was killed yesterday in San Bernardino County, California while out on a training ride. The 27-year old, originally from Mexico, had joined the team as an amateur earlier this year after racing many years with Kahala-LaGrange.


More photos of Jorge Alvarado, on the facebook page of the Herbalife LaGrange Cycling Team

The Press-Enterprise reports that according to San Bernardino County sheriff’s officials, the driver was street racing:

Alvarado was struck by a white 2002 Honda Accord driven by an 18-year-old Highland resident, who had one passenger, and was following two other Hondas, sheriff’s investigators said in a written statement. All three cars were occupied by seniors from a local high school.

“The three vehicles were street racing when (the driver) changed lanes to the wrong side of the road as he attempted to pass the vehicle in front of him,” the statement says.

From the Coroner’s press release: “When deputies arrived they found that a vehicle being driven northbound Greenspot Rd., lost control, crossed over into the south bound lane and struck a bicyclist that had been riding along the west shoulder of southbound Greenspot Rd.”

Velonews reports that the identity of the driver is known and “chances are good that charges will be filed”.

Deepest condolences to his family, friends and teammates.