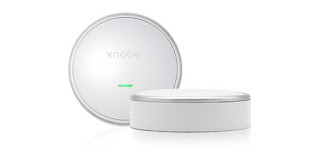 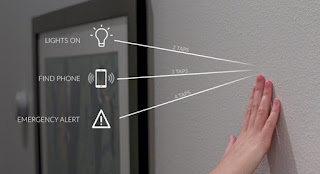 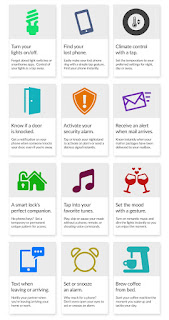 Knocki is a smart device that gives you control of your favorite functions through the surfaces around you.


Turn Any Surface into a Remote Control

Technology should make our lives easier, so why does controlling it feel so complicated? An endless maze of mobile apps, smart switches, and other interfaces create a confusing and fragmented experience.

We believe there's a better way - Knocki offers the simplest, most natural, and accessible way to control the world around you. You've never seen anything like it!

Using Knocki is easy. Just tap simple gestures anywhere on a Knocki-enabled surface to automate all kinds of useful actions. Make your ordinary surroundings do more.


Why reach for a phone, a remote, or a switch to perform your favorite functions? There's another control interface that's always within reach - the world around you, and you can activate it with Knocki.


Can your table turn on a TV or dim the lights? With Knocki discreetly mounted underneath, the entire surface becomes capable and connected. Knocki adds magical simplicity wherever you use it.

Knocki isn't just for people with smart homes or high-tech offices. Knocki works well anywhere with a WiFi internet connection. It allows you to "tap" into many powerful functions, even if your only smart device is an iPhone or Android phone.

Knocki is the easiest way to add "smarts" to your existing home, without the wiring, installation, complexity and expense of many alternative smart home control systems.

But if you already have a few smart devices, you can immediately expand what Knocki can do, and transform "dumb" surfaces all around your home or office into intelligent interfaces.

Bottom line, if you'd like technology to work for you, instead of the other way around, you'll appreciate the power of Knocki!


You can put Knocki on, under, or behind surfaces anywhere!

Attach Knocki on walls, under tables, behind shelves or nightstands, behind your front door, and more! Knocki can be placed in plain sight, or mounted invisibly under or behind surfaces so only you know its there.


Each Knocki includes a special mount featuring our patent-pending SurfaceLink™ technology to ensure a solid connection to a surface for transmission of gesture signals. Knocki's mount can be secured using the included 3M removable tape, or with screws (also included).

Setting up your Knocki is easy and just takes a few minutes. Start by connecting Knocki to your WiFi network and use the free Knocki companion app to link all your devices and accounts.

After Knocki is mounted to a surface, define the unique gestures to trigger your actions (up to 10 gestures), and you've instantly created a powerful smart surface! The process is simple, and once it's done, Knocki will keep working (via WiFi) even if your phone is turned off or away!


With Knocki installed on a surface, the surface instantly becomes a powerful and programmable remote control, even many feet away from where Knocki is attached.

Knocki uses non-acoustic sensor technology to detect gentle surface gestures even a distance away, but Knocki also has the intelligence to filter out random vibrations. Therefore, Knocki works under busy breakfast tables and other "high-activity" surfaces.

Knocki reliably identifies simple gestures defined by taps or knocks on a surface. Gestures can be defined by a quantity (two, three, four, or more taps), or even by more complex patterns (two taps + three taps) for more secure functions.

For example, a double tap can be set to turn on a light, and a more elaborate sequence (two triple taps followed by a double tap) can be used to unlock a smart lock.

One Knocki can store up to 10 unique gestures, turning any surface into a remote control with many functions.
A gesture can trigger a single action (e.g. "find phone"), or a set of actions (e.g. "door locked" + "lights off" + "home security armed").
Our Patent-Pending Technology

Knocki's performance is made possible by our suite of patent-pending technology and sophisticated software & hardware algorithms:

Knocki deciphers deliberate taps and knocks from random vibrations in the environment to minimize false positives.
Knocki uses non-acoustic sensor technology that is NOT triggered by or affected by sound. Thus, multiple Knockis can coexist in the same room without conflict (as long as they are on separate surfaces). For example, you can setup one Knocki behind your nightstand, and another behind the nightstand of your partner!
Advanced power-budgeting delivers over 12 months of battery life using AAA batteries. (Please always use mercury free batteries, or better yet, rechargeable batteries! We like this planet).

What About Voice Control?

Voice control is everywhere. Services like Apple’s Siri and Amazon’s Alexa can simplify tasks, but often don’t work as expected.

Here are a few of the problems:

Background sounds: Music or a TV playing in the background can render voice-control useless. Knocki uses non-acoustic sensors so it works just as well if you’re jamming to music, watching the evening news, or if people are talking in the background.
Can Disturb Others: Voice control is problematic in quiet environments such as a shared office or in bedrooms where you don’t want to disturb others. Knocki’s advanced accelerometer technology responds to gentle taps that others won’t hear.
It Often Misunderstands: Did you say “where is rome” or “navigate home?” Voice technology is finicky, especially with kids, elderly, and people with accents who might not enunciate in the required way. Knocki uses simple tap/knock gestures, and our patent-pending technology to perform reliably whether you tap fast, slow, hard, or soft.
Can’t use multiple voice controllers in the same space: Good luck putting a voice controller on your nightstand, and then another one on your partner’s nightstand. You’ll have both controllers responding simultaneously creating smart home chaos. Knocki recognizes gestures on a specific surface so you can have multiple Knockis in the same room or other space without conflict. Knocki allows you to personalize controls to the surfaces near you.


What about Smart Switches and Buttons?

Smart buttons and switches can also automate tasks, but they have a few “pressing” problems.

Don’t blend in: Wall switches and buttons aren’t so pretty to look at. Knocki can be placed under or behind surfaces, so you don’t even have to see it to use it. But if you do mount it within view, it blends beautifully with your surfaces.
Must be pressed or flipped: Physical buttons and switches must be within physical reach in order to be used. Knocki turns an entire surface into a remote control, so you can trigger actions from anywhere, without needing to visually or physically locate a specific spot. (Also great for kids, physically impaired, and elderly who can’t reach a switch).
Not as reliable or responsive: Most buttons rely on Bluetooth, so they require a phone to be turned on, paired to the button, and within range in order to function. Unlike smart buttons, Knocki uses WiFi to trigger actions directly, without going through a phone. This allows Knocki to work instantly without the lag of bluetooth, and even if your phone is off.
Limited functionality: Many smart switches/buttons only perform a single on/off function, or are limited to only a few press patterns. Knocki can provide quick and easy control of a few functions for most users, but power users can go wild with up to 10 gestures per Knocki-enabled surface, allowing their entire tables, walls, furniture and other surfaces to control thousands of devices via IFTTT, SmartThings, Wemo, and more!


Here's what you get with each unit ordered:


Knocki: Made in the USA.
Surface Mount: Featuring our SurfaceLink™ technology, the mount helps transfer gesture signals from the surface to Knocki.
3M Tape: Working directly with 3M, we've customized and tested a secure yet removable adhesive to avoid damaging surfaces.
AAA Duracell Batteries: Mercury-free Duracell alkaline batteries provide over 12 months of battery life.
Our Free Companion App (iOS & Android): Only necessary for device setup. The app allows you to easily connect Knocki to your WiFi and quickly add up to 10 gestures per Knocki device. You can manage multiple Knockis from one account. The app also allows you to monitor battery life, connectivity status, and view activity logs.
Quick Setup Guide: Get up and running in no time!

Knocki can make a difference in anyone's life. However, it can be truly life-changing for people with mobility or vision impairments who are unable to reach or visually locate a switch, button, or phone. Knocki also improves accessibility for children and the elderly.

The response of backers around the world to our campaign has been absolutely amazing! Thanks to the feedback and suggestions from many of our backers, we're pleased to announce our first stretch goal! We'll unlock the two features below as soon as our campaign hits $700,000.

Co-founders Jake & Ohad have been friends for years, but their "aha moment" happened more recently over a family get-together. They were watching one of their small children stacking up boxes to reach a light switch. That observation led them to ask a simple question, "Why not turn walls and other common surfaces into control interfaces?"

That was the spark that set them on their path to develop Knocki, and this Kickstarter campaign marks an exciting milestone. Building a successful company, growing a talented team, and developing an amazing product is full of hard work and perseverance, and we thank you for supporting us as we bring Knocki to the world!