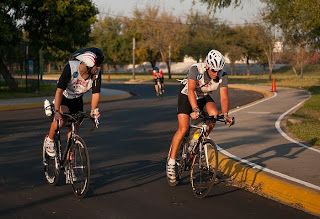 or for those who have not brushed up on their Italian lately:
http://translate.google.com/translate?u=http%3A%2F%2Fwww.limit09.com%2F&sl=it&tl=en&hl=EN&ie=UTF-8

This Italian gentlemen is attempting 30 ironman distance events in the course of 30 days.

Now considering some people race deca irons (10x the iron distance - 24 mile swim, 1120 mile bike, 262 mile run), this is really only three of those, and he is taking breaks to sleep between each set of iron distances.

That makes it seem more plausible.

And of course Dean ran 50 marathons in 50 days.

hmmm.....
I wonder what toll bad weather, injuries, etc. could have?
I imagine that his body will also adapt.
I wonder what his pace will be. Most Iron distance races have a cutoff of 17 hours, and most are won with a time sub 9 hours. His pace will dictate recovery time between efforts and sleep. Unless he's figured out how to sleep while performing one of the events.

So, obviously he has a background, an aptitude, and base for this type of undertaking. Vincenzo planned to start at the end of August 2009, but has postponed until 28 AUGUST 2010. I guess we will wait for a year to see - holding our breath. :)

Here is a part of Vincenzo Catalano's resume: