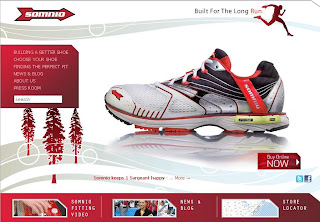 Customized Running: A Visit With Somnio Running Shoes
by Shoes and Gear


New running shoe company is looking to change the way you buy your trainers.

I recall fitting cyclists to their bikes 15 years ago with a tool called the Fit Kit. Back then, bike fitting was a fairly new prospect; before then, it was about as specific as making sure you had a bit of inseam clearance, or could scrape your heel on your pedal when swinging your leg as a pendulum whilst sitting on your soon-to-be new bike trainer. A squint of the eye, and off you went.
Today, there are lasers, Dartfish angle determinations, expensive fitting bikes and charts, all delivered by classroom-certified fitters. You would be remiss to head out the door after spending $3,000 or more without having a very, very good idea that your fit on that bike is spot-on, and that you’d just headed off any number of potential repetitive motion injuries.

But what about your daily run trainers?

For all the advances in fitting of bikes, running shoes have been a black hole of information. Usually, biomechanists see runners and triathletes after the injury has occurred, which is followed by a gait analysis, perhaps a shoe recommendation, and likely a prescription for a $300 custom orthotic.

“Look for literature on gait mechanics, and there’s such a void out there,” said Tim Hilden, biomechanist at the Boulder Center for Sports Medicine.
Somnio Running Shoes

A new Santa Cruz-based shoe company called Somnio (after the latin for “dream”) endeavors to solve common running injury problems not reactively, but proactively. Instead of selling you a shoe to prevent an injury you’ve acquired, they want to get you into a shoe that prevents the problem from even happening. The result is a shoe (actually three models) for men and women that have the ability to receive up to 12 adjustable inserts that can be combined to create more than 648 different shoe customizations.

The concept is something that has existed in the bike industry for decades: analyze the motion, correct the imperfections. So it comes as no surprise to learn that Somnio’s president, Sean Sullivan, has a history in the industry within the bike segment, spending several years with Specialized and its renowned Body Geometry fit program.

Sullivan thought, “If this works for cycling, why not running?”

Sullivan paired with BCSM’s Tim Hilden to develop the first fully customizable running shoe. As a biomechanist, Hilden sees a paradigm shift on the horizon. “The next five years, there will be a lot more change about how shoe companies address alignment control,” he said.

Patterns of injury include patellofemoral pain due to forward trunk lean (an overt Pose method), patellar tendonitis due to late initial full-foot contact loading, shin splints thanks to a short, choppy stride and Achilles tendinopathy due to fatigue-related exacerbation of sloppy running form. We often correct the problem with an orthotic, after we’ve experienced the injury. But what if, with the help of a bit of proactive analysis, you were able to customize your shoe to prevent the injury from even happening?

Historically, the shoe industry has been fairly uniform in shoe design. Everyone uses a firm durometer at the arch to stop the motion of arch collapse during footstrike, creating a firm buttress to stop that motion. Varieties of methods and materials are used from brand to brand, but the desired effect is always the same.

As a runner, it’s your onus to determine how much support you need, if you need any at all. It can be a hit-or-miss proposition, and an expensive one as you go through shoes, and a painful one if you experience injury along the way.

Somnio’s approach is different. Their shoes support the arch from the inside, adjust the shoe from the outside. Somnio shoes have the canting as well as the intrinsic capturing of the arch support, and balance is addressed without just blocking at the foot.

“It’s a completely different way of correcting. With this system, we’re treating the cause,” says Sullivan. “With an orthotic, or with Somnio, you’re treating the cause of the misalignment. With this shoe, (the shop) can come in before you have a problem. It’s 60 percent of what an orthotic can be, and it doesn’t cost $600. We wanted to take the way a med professional would look at alignment, and give. There are a bunch of people who would benefit from this kind of support.”

While still a budding company, the result in some customers, Sullivan says, has been pretty shocking. “The alignment and support is completely different, such that we’ve been able to move people in a motion control shoe into a stability shoe, or people who have run in a stability shoe into a neutral shoe.”

The Hardware
The author choses the recommended inserts for his needs.


Straight away, you can tell that Somnio shoes are unique. The thing that jumps out is the red stitching on the board, sandwiched between the upper and the sole. In order to get accurate canting with the shoe’s wedges and footbed inserts, the upper is stitched to a modified welt construction—think of a Timberland boot. Standard upper and sole attachment with glue makes for curvatures and inaccurate canting. “It’s extremely difficult, but it results in a perfectly accurate measure,” Sullivan said.

“We have to have that board to make the shoe flat,” Sullivan added. “For all the adjustment in the shoe, a flat surface ensures the adjustments are honest.”

The other elements are the splashes of color at the lateral midfoot and heel. These are the custom-adjustable cushion inserts. With three different levels of cushion, or durometers, the ride of the shoe can be fully customized. While Somnio dealers have a clever alloy lever used to install or remove the slide-in wedges, something as simple as a stiff butter knife will suffice.

The inserts decrease the “timing” of pronation through the use of a softer-durometer heel insert (thus avoiding a catapult effect, where the heel forces the shoe through to slap the sole to the ground). It effectively accommodates for different weight categories and injury-prevention needs.

“For comparison,” Sullivan says, “the Nike Pegasus has the same durometer and air bag in a women’s size 5 as a men’s 12. You have runners of completely different weight and dimension on the same cushioning. We just think it should be specific to the runner.”

For that matter, in any single runner the left foot and right foot don’t always ride in the same way. So Somnio allows a runner to differentiate right and left shoes to account for imbalances and discrepancies. “You can really affect the intrinsic feel of the shoe,” Hilden said. “You can customize the feel and really enjoy the ride. For some runners, the act of running can now be a more comfortable experience, not one they should just have to put up with.”

Inside the shoe, the customer can choose from three different arch heights, which intrinsically capture the foot structure. Further, Somnio offers inserts that can add varus or valgus canting to the forefoot, based on your dealer’s advice after a gait analysis.

A runner can stack the inserts to create the proper amount of correction. It goes in and directly influences foot alignment. Of course, customers can purchase different footbeds and wedges from their dealers to tweak their ride as their season goes on, or as they see fit.

Analysis
Author before his gait analysis.


Gait analysis is something that should be done as part of any running shoe purchase, and is a practice that, fortunately, some retailers are starting to embrace. Hilden took side and rear video to identify idiosyncrasies. Mine? This was my first run gait analysis, and I thought I had a pretty good gait. Of course, I thought wrong. He ran back tape adding a visible angle finder to determine that I tend to run midfoot, but I also tend to want to lead with my chest, with both arms back, hands almost always at my hips. My project? Try harder to incorporate my arms, forward of my chest.

And below the hips, he made a correction with one shim in my left forefoot, and use of a slightly higher arch insert, for a bit more capture of a higher arch in that foot. Post-adjustment, the forward stride became a touch more linear. It was a small adjustment, but I was impressed.
Author after his gait analysis.

Author after his gait analysis.

Of course, coming from over a decade of bike fitting, where a linear cycling path is also the goal, I was not surprised. I’ve only been surprised that the running shoe industry has only just now applied the same principles to running shoes.

The company offers a stability trainer (the Exact Change), a neutral trainer (the Runaissance) and a motion control shoe (the Mission Control) with a lightweight racer and trail runner coming down the pipeline.

Will this lead to a new wave of runners and triathletes who use this shoe as a tool to empower themselves to get what they need in running footwear? All I know is this: Not long ago people said high-tech bike fitting would never catch on.

You can find more on the Somnio line at http://wwww.SomnioRunning.com.

Check out our video from our visit with Somnio! Shoe Talk: Somnio Running