A bicyclist struck and killed by a hit-and-run driver in Anaheim early Wednesday was dragged several feet by a second car, according to police.

The first crash occurred at about 5:40 a.m. near Orangethorpe Avenue and Lemon Street (map). The cyclist was then dragged several feet on the street in front of a church by a second vehicle, according to Anaheim police.

The driver of the second vehicle stopped and will likely not face charges, according to police.

Details regarding the hit-and-run vehicle and victim, who died at the scene, were not immediately available. The driver struck another vehicle after hitting the cyclist, according to police.

"We don't have any information on the suspect vehicle, but we know this roadway is very heavily traveled," said Anaheim Lt. Bob Dunn. "Somebody had to have seen something."

Orangethorpe Avenue was closed for the investigation. The crumpled bike and evidence markers were in the street.

People at the scene who told NBC4 they know the victim said he is a 19-year-old man. They said he was likely biking to work.


Vigil for Tyler Brooks-Szabo
Jonathon Brodie
About 70 people came out for the candlelight vigil Wednesday (Oct. 30) held at the Zone B entrance of the London Health Sciences Centre in support of hit-and-run victim Tyler Brooks-Szabo.
London Community News

Most people taking part in the bike ride and candlelight vigil Wednesday (Oct. 30) had never even met 10-year-old Tyler Brooks-Szabo, who was being honoured at the gathering.

The boy remains in critical condition at Victoria Hospital after being struck by a car Friday (Oct. 25), but about 70 people from the community want him to know they are riding behind him.

“This 10-year-old kid who was out cycling on the sidewalk going to his friend’s house for a sleepover, it’s what we should all be doing when we’re 10 years old, and it really tore my heart,” said Gary Brown, organizer of the ride and vigil.

About 30 people met at Lorne Avenue Public School at 5 p.m. before riding their bikes to city hall. They then did a lap around Victoria Park and finished by showing their support at the London Health Sciences Centre (LHSC) with a candlelight and glow stick vigil at about 6:15 p.m.

Plenty more people met the cyclists at the hospital and the numbers more than doubled.

Along with the bright lights being held high in front of Zone B of the hospital, cyclists also rang their bells for a minute to add some audio with the visual.

At LHSC, Brooks-Szabo’s aunt took part in the ceremony, as well as friends, young and old, from the street he lives on.

Homemade keychains and bracelets were displayed on a table for sale, as well as a donation box put out beside them, to collect money towards a trust fund set up by friends of Brooks-Szabo family. The funds will be used to help the parents of the 10-year-old while they stay at the bedside of their son.

According to Bethany Joyce-Wiggins, a friend who set up the Justice for Tyler Facebook page, the donations have already surpassed the $1,300 mark in two days.

“I think everyone is hoping for something positive,” Joyce-Wiggins said. “I love how the community has come together for such a special boy.”

Two people, from Ingersoll, have been arrested in connection to the hit-and-run of Brooks-Szabo and have been charged with a number of offences. 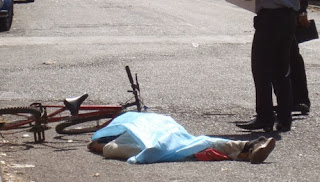