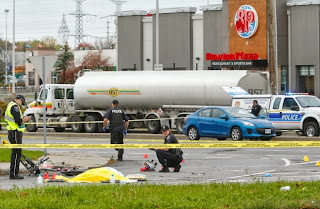 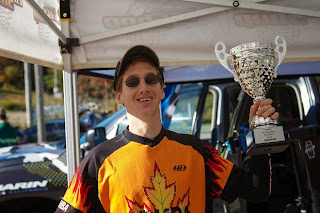 A cyclist is dead following a crash with a truck on Merivale Rd. Thursday.

The 38-year-old man was pronounced dead at the scene at about 8 a.m. near the Hunt Club Rd. intersection.

For several hours, the man's body lay under a yellow tarp on the southbound lane of Merivale as police photographed the scene.

A man standing near the crash site said a man who worked for his company witnessed the collision but his was not the truck involved the crash.

Though the area around the usually busy intersection was closed and quiet during the investigation, a handful of onlookers came out to see what was going on.

Jordan Brunner said he often cycles through the intersection but doesn't find it particularly dangerous.

"I mean, any big intersection can be dangerous when you're on a bike," he said. "But (Hunt Club and Merivale) I wouldn't say is a really bad one or anything, if you're paying attention and all that."

He said he finds hearing about any cyclist injury or fatality on city streets very difficult.

"You always think that a few minutes earlier it could have been you," he said. "It's pretty scary."

A Tim Hortons employee said she heard the commotion but didn't witness the accident. She was worried the cyclist may be one of her regulars, as many cyclists pop into the store for coffee on their way to work.

"You don't know their names, but you know their faces and their orders," said the woman. "I hope it's not someone I know."

Mario Théoret, who was killed on Thursday morning in a collision with a tractor trailer at the intersection of Hunt Club Road and Merivale Avenue, was photographed at a cycling event on Sept. 28. An avid cyclist, he was well known and respected in the Ottawa mountain biking community.

OTTAWA — The cyclist who died Thursday morning in a collision with a tractor trailer had recently expressed concerns online about the drivers on his regular route to work.And friends say that just a few weeks ago, Mario Théoret, worried about cars driving into designated bike lanes, started affixing a camera to his bicycle.“He said the next time that happened, he’d have proof of it,” Cat Weaver, a close friend, said Friday. “He felt that he had the right to ride his bike to work safely.”

Théoret, 38, collided with a tractor-trailer at the intersection of West Hunt Club Road and Merivale Avenue on Thursday morning while riding his bicycle on his 25-kilometre commute. He was pronounced dead at the scene. Police wouldn’t say whether they recovered a camera; their investigation is ongoing.Théoret, an avid cyclist and outdoorsman, was much-loved in Ottawa’s mountain biking community for his boundless generosity and positivity, friends said.

With Weaver, he founded the Ottawa chapter of Trips for Kids, which provides recreational activities such as mountain biking to underprivileged children.He helped to run much of it out of his Bells Corners home; his garage is full of about 50 mountain bikes and his basement features neatly-organized stacks of spare bike parts.He worked tirelessly creating and maintaining mountain biking trails in Kanata, friends said. He was also a dedicated uncle to his two nieces, aged 14 and 12, and his nephew, seven. And he’d never forget anyone’s birthday or anniversary.

When a co-worker of his started chemotherapy for breast cancer, he shaved his head so she wouldn’t be the only bald one in the office. And next week, he would have made his 74th blood donation.“He gave so much, and asked nothing of anyone,” Weaver said.Théoret also frequently posted on the Ottawa Mountain Bike Association’s online message boards. According to one post in late August, he wrote to the City of Ottawa about cycling on Hunt Club, stretches of which don’t have dedicated bike lanes.

He got a quick response within hours, which he wrote online “addressed all my questions/concerns and reads optimistically.” The response said that the city considers Hunt Club Road as a route requiring bicycle lanes, and that they will be implemented “as soon as there is an opportunity to add them to the roadway.”

The stretch of Hunt Club where Théoret died on Thursday does have a bike lane.Théoret’s older brother Roch said he often spoke to Mario about his safety.“I did express a lot of concern to him about his own safety, hundreds of times. But he was too passionate,” he said. “He did what he loved to do.”

Friends said Théoret, an experienced cyclist with thousands of hours under his belt, followed bike safety rules to the letter.“His bike handling skills were top-notch,” said Sandra Beaubien, who knew Théoret for almost a decade. “I don’t know how much of a warning he would have had, because I know he can react very fast to situations.

“The mountain bike community here in Ottawa is like an extended family,” she added. “When something like this happens to our community, it’s devastating.”Théoret was also a beer connoisseur, with a particular fondness for Beau’s. He was a huge Calgary Flames fan, with team memorabilia lining the walls of his basement. And he had his quirks, including a habit of wearing the same pair of cowboy boots.

But above all, for him it was about the bike, which he rode to and from his job as a technologist, as well as on weekends.
When he was 24, he was in an ATV accident that threatened his ability to walk and left him in a body brace, said Roch Théoret. That was a turning point, he said, and the trigger for the cycling passion Mario picked up after he recovered.In another post online about a month ago, Théoret wrote about a car he saw barely avoid smashing into a school bus turning left. He said he sees his share of bad drivers during his commute.“He was a pro,” Roch Théoret said. “But I think, like every other biker, you are literally at the mercy of these big pieces of metal.

The Ottawa Mountain Bike Association is collecting donations for Trips for Kids Ottawa, which Mario co-founded, at

Demand for action as another cyclist dies

Brian Beacom Senior Features Writer Monday 30 September 2013
CYCLING campaigners are to demand the Scottish Government increases its efforts to tackle the rise in cyclists being killed in road crashes after another fatal accident.

The latest collision happened on the B9102 near the Dandaleith junction north of Craigellachie in Moray, at 9.25am on Saturday.A woman cyclist, as yet unnamed, died at the scene, but the driver of a car, a Vauxhall Corsa, was not hurt.Twelve cyclists have been killed this year in Scotland so far, compared to nine last year.Sally Hinchman, of the Pedal on Parliament cycling safety lobby group, says more pressure must be put on the Scottish Government to reduce the danger levels on Scottish roads.

"One of the big problems is we don't get to hear the detail of how these accidents came about," she said. "The police will investigate criminality. But there is no real analysis of why the accident came about, in terms of looking at the roads, to highlight the blackspots."In Sweden and the Netherlands examinations of the roads or junctions are carried out, traffic speed is analysed and maps are drawn up which show the black-spots. But this mapping doesn't happen so much in Scotland. Sweden has a Zero Death policy. That's what we need here."

Ms Hinchman added: "We need to record all the cycling accidents, not only those which result in death. And we need to change our thinking. If a helicopter crashes they are grounded until investigators are sure it's safe to fly. But if someone is killed on a bike on a road it is seen to be just one of these things. If we had this many deaths on a plane, the nation would be stunned. Because it's happened to cyclists, we just seem to accept it."

Pedal on Parliament, which began on a social media forum, argues 60mph is an unsuitable speed for many of Scotland's minor roads and car drivers often don't have the time to see cyclists round a bend or over a hump.The campaigning group highlights the fact victims are often experienced cyclists. "They are not people who are going out there taking risks," said Ms Hinchman."The onus of responsibility is always on the cyclists, but they have little protection, beyond a crash helmet and a yellow vest."

Fellow Pedal On Parliament campaigner David Brennan argues education will help, but money has to be spent on Scottish roads. "You'll always have good and bad drivers. Ultimately, safety is about speed limits and infrastructure. There are good signs coming from the Scottish Government, with £20m being spent over two years, but we want £100m, a small part of the transport budget."

A Transport Scotland spokesman said: "We are investing £58m on cycling infrastructure, training and road safety projects through Cycling Scotland, Sustrans and councils over this spending review. Funding of £20m goes directly to councils for cycling, walking and Safer Streets projects."