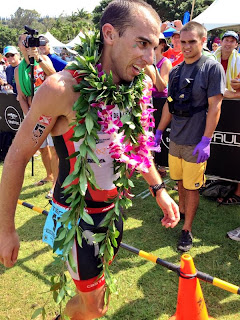 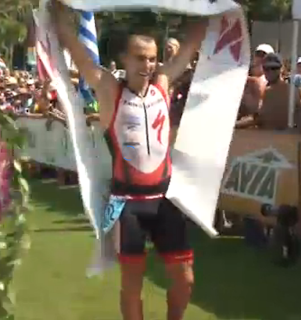 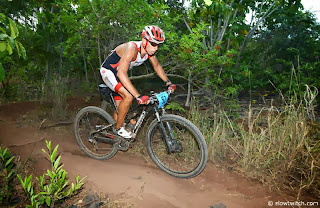 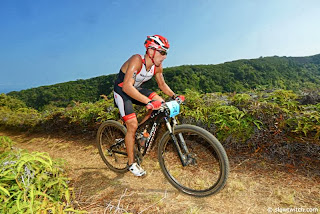 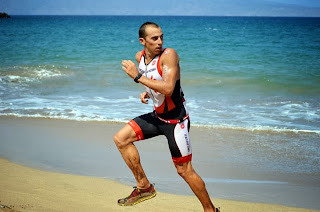 xterra live 20:00 hora española XTERRA Worlds Live View From Maui Watch XTERRA announcer Kalei Waiwaiole as she gives you a first person account of the sights and sounds of the 2013 XTERRA World Championship. We'll bring you a live feed from the race start, swim, T2 and the finish beginning at 8:45am Hawaiian Time. Follow @xterraoffroad on Twitter, hashtag #xterramaui or the transcript at the bottom of this page for race updates. Follow Your Favorite Athlete The chip timing system we have this year can have swim split, bike split, and finish times of your favorite athlete automatically posted to your Facebook and Twitter timelines and/or have them sent to a mobile phone via SMS text. To set this up go to Track Athletes. Friends and family can also type your name into the search box here on raceday: Live Splits Note: Live timing isn’t always perfect, and results won’t be official until timing is verified. http://www.xterralive.com/worlds/ .-.-.-.-.-.-

At bike km 5 the top 5 men group together are Leonardo Chacon, Ben Allen - AUS, Asa Shaw - UK and Courtney Atkinson. And the women are Nicky Samuels NZ that has taken the lead with Flora Duffy, Barbara Riveros from Chile and Lesley Paterson

At the top of the climb we have Leonardo Chacon in the lead followed by Allen, Shaw, Ruzafa and Middaugh.

The top 5 women at the top of the climb are Samuels, Duffy, Riveros, Paterson and Jacqui Slac

Mile 13, km 24 of bike Chacon and Allen together at front, have 45 sec lead on Stoltz and Ruzafa.Women Nicky Samuels leads Barbara Riveros by 2:05, Lesley Patterson and Flora Duffy a further 30sec back in 3rd and 4th

After mile 15, km 27 on the bike Ruben Ruzafa has taken the lead with Ben Allen and Leonardo Chacon packed together. Asa Shaw and Conrad Stoltz are about a minute back.Nicky Samuels leads the women's race at Mile 15 of bike ... three minutes ahead of Flora Duffy, then Barbara Riveros and Lesley Paterson

At run mile 3, km 5 Ruzafa, Allen who is 1 min back with Shaw closley behind. Middaugh is running strong 2:15 back from the lead. Ruben Ruzafa in the lead approaching the beach stretch of the run.Asa Shaw now in second, Ben Allen third, Josiah Middaugh fourth. 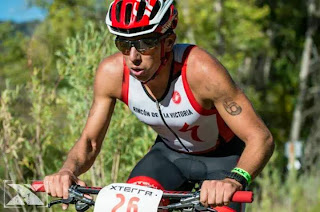 Ruben Ruzafa from Spain made a triumphant return to the XTERRA World Championship by winning it five years after his inaugural victory in 2008. On the women's side, a new champion was crowned as Nicky Samuels from New Zealand took the title in her first appearance at the XTERRA World Championship. More than 800 endurance athletes from around the world gathered at The Ritz-Carlton Kapalua on Maui to participate in the off-road triathlon. .-.-.-.-.-.-.- 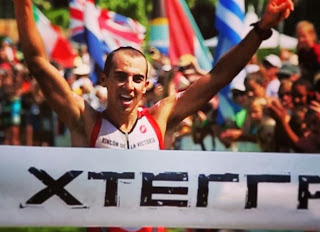 2013 Ruben Ruzafa, 29, and Nicky Samuels, 30, were crowned the 2013 XTERRA world champions today in Kapalua, Maui, asserting the lead on the bike and never relinquishing it.

Ruzafa, formerly a pro mountain biker, won the title in 2008, in his first try at the event. Samuels, an ITU athlete who placed 35th in the London Olympics, came to Maui for some downtime and surprised even herself with the victory.

Athletes were greeted with calm surf conditions but a substantial sea current for the 1-mile swim fronting the Ritz-Carlton Kapalua on Maui’s northwest shore. Aussie Courtney Atkinson, US National Champion Leonardo Chacon of Costa Rica, Brit Richard Stannard, Aussie Ben Allen and South African Richard Murray comprised the lead group that set the pace for the swim. Stannard, 39, was the first out of the water, posting the day’s fastest split of 18:48.

Atkinson was first out of transition, with Chacon and Stannard on his heels. Ruzafa had a 1:30 deficit coming out of the swim.

At mile 3 of the bike, then leader Chacon carried a slight lead over Allen, who was being tailed by Asa Shaw of the UK, Murray and Atkinson. Ruzafa was quickly gaining ground, however, and he and Allen took command of the bike race and began to assert a small gap on their closest chasers, which also included American Josiah Middaugh and South African Conrad Stoltz.

Ruzafa demonstrated his skill as a climber on the bike course, an 18.8-mile roller coaster that crisscrossed the lower slopes of the West Maui mountains and amounted to about 3,000 feet of climbing. Ruzafa was first into T2 (his 1:33:11 bike split was the day’s fastest),

Followed by Allen, Stoltz, Chacon, Middaugh and Shaw. At mile 3 Ruzafa enjoyed a 1-minute lead over Allen, with Shaw closely behind him and Middaugh running strong 2:15 down from the lead. Still, Ruzafa was able to keep his chasers at bay, crossing the finish first with an overall time of 2:34:34. Shaw, who recorded the fastest 10K run of the day, 39:24, crossed in second (2:35:56) and an ecstatic Allen held on for third (2:36:21). Middaugh was today’s top American finisher, finishing fourth in 2:37:40. Braden Currie from New Zealand was fifth, while Stoltz hung on for sixth place.

“I caught Conrad and Asa on the bike, and then Chacon and was surprised because he’s really fast on the downhills,” said Ruzafa of the pivotal point where he knew he might have a chance at the win. “I drank a lot on the bike and stayed relatively fresh for the run. I pushed really hard and I’m happy,” he said.

ITU racer Flora Duffy of Bermuda was the first female out of the swim (she posted the fastest swim split among the women, 19:21), followed closely by Canadian Christine Jeffrey (eventual DNF) and Nicky Samuels. Duffy led out of T1, but was soon overtaken on the bike by Samuels, who by mile 3 became the close-range target for fellow ITU competitor Barbara Riveros of Chile and the two-time defending world champion, Lesley Paterson, aka The Scottish Rocket.

At the top of the first main climb, Samuels, who just started practicing on her mountain bike three weeks ago, still led Duffy, Riveros, Paterson and Slack with no substantial sign of that gap shrinking. Caution on the descents didn’t cost her enough time to relinquish the lead, and she entered the transition area first, followed by Duffy and then Riveros. Paterson started the run with a four-minute deficit.

Samuels made quick time up the hilly first half of the 10K course, and after realizing she had a 2:30 buffer on her nearest chaser, “just cruised it” downhill to the finish line, clocking a winning time of 2:57:48. Paterson chased down Duffy, passing her within a hundred yards of the finish line for second place in 3:00:14 (she posted the fasted run among the women, 43:55). Duffy crossed the line five seconds later. Riveros came in fourth (3:01:43) and American Emma Garrard rounded out the top five, finishing just six seconds later.

“I’m in shock, really,” said Samuels after her win. “I didn’t know how my mountain biking skills—or lack thereof—were going to stand up to the other girls. It’s the end of the year for me so I wanted to do something fun, something different, and this is a great way to end the year.” 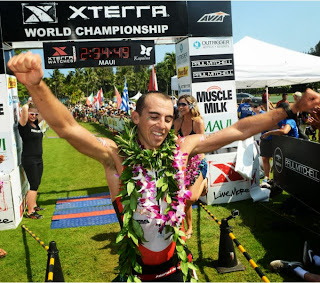 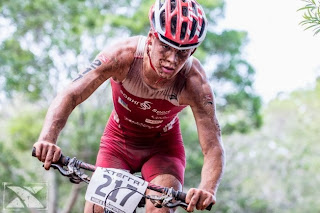