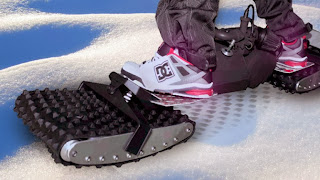 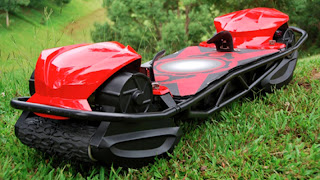 Resembling a cross between a caster board and a tank, the current Ungoverned 1 prototype rides on two caterpillar tracks that are powered by a four-stroke engine. However, Baldwin says it's a relatively easy process to swap out the engine so there are plans to offer a battery-powered electric motor as an option if and when the Ungoverned makes it to market.

The vehicle is designed to seamlessly transition between various types of terrain without the need to change the tracks and has been tested on rocks, sand and dirt. Baldwin is planning snow trials in the near future. Acceleration is controlled by a wired hand controller but the Ungoverned's maximum speed hasn't yet been announced. Of course, speeds are sure to vary across different terrain.

With Australian startup Scarpar Pty Ltd established to further develop and bring to market Baldwin's original Powerboard (which is due to occur next year), he is hoping to gain attention from Scarpar or another company to bring the Ungoverned to market.

Check out the following video to see if you like his chances.