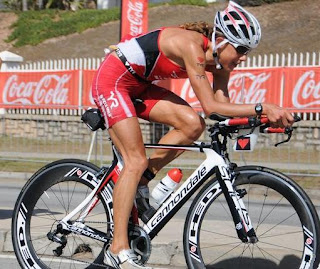 Another Course Record and World Record in the books! 8:33:56 and 8th overall classification including men!
The women’s race
The women’s race had all but one outcome even before the starting cannon fired at the 07:00 start. The Ironman juggernaut that is Chrissie Wellington, fulfilled everyone’s predictions and expectations but gave the crowd something to remember, or should we say never forget, as she powered her way to an unbelievable new world record time.

Wellington exited the swim in third place in a time of 00:51:40 behind the USA’s Amanda Stevens 00:48:55 and Rachel Joyce (GBR) 00:51:06. After taking the lead on the bike there was never any other outcome as she continued to increase the gap between herself and compatriot, Joyce, throughout the race. Belinda Granger (AUS) made a play for the top three passing Stevens after the 120km on the bike.

All the while Wellington proceeded to create a chasm between her and the chasing pack stretching the lead from 9 minutes on the bike to over 20 minutes midway into the marathon. With the outcome now clear, the only thought that was on spectators’ minds were records – and there were plenty of them! Not only did the Briton break Natascha Badmann’s bike course record, Sonja Tajsich’s run course record and even Lucie Zelenkova’s course record, but went that one step further by breaking her own Ironman world record. Wellington also managed to run the fastest overall marathon, something that she was particularly proud of.

In the end Wellington finished first in a phenomenal time of 08:33:56 followed in the distance by Joyce 09:08:23 and Diana Riesler 09:20:37, who claimed her first ever podium finish. The German climbed into third place early into the marathon as she had to usurp not only Granger but also Eva Dollinger (AUT).

“I tried to be consistent over each leg and I didn’t lose time on any leg. I wanted to do well but never thought I’d break the world record. I was shocked that I broke the record,” said an ecstatic Wellington. She later paid tribute to the spectators saying: “they are the wind beneath my wings and that extra energy out on the course.”

Anyone who was fortunate enough to be present at the 2011 Spec-Savers Ironman South Africa can count their blessings as they bore witness to history in the making and also got to see their local hero emerge victorious and one of the all-time greats put in a truly unforgettable performance. The 7th edition of the Spec-Savers Ironman South Africa was an epic race that will be remembered for many years to come.

The provisional results for the top ten males and females, respectively:

Records tumbled and legends graced the stage at the 2011 Spec-Savers Ironman South Africa with local hero, Raynard Tissink (RSA), successfully defending his title and Ironman demigoddess Chrissie Wellington (GBR) taking the women’s title. Tissink broke the course record and the bike course record in the process while Wellington not only smashed the course, bike and run records but also broke her own world Ironman record to conclude a phenomenal performance.

The race was truly one to savour as a spectator as a spectacular battle emerged between the top three men, Tissink, Marino Vanhoenacker (BEL) and Andreas Böcherer (GER) for most of the race. Conditions were near perfect with a calm sea, a light cooling breeze and hot temperature at 26 degrees Celsius. Contrary to normal Port Elizabeth conditions, the breeze actually aided the athletes, cooling them down especially on the run.

The race was not without its casualties as favourite, Vanhoenacker, last year’s fourth placed finisher, Jason Shortis and his compatriot, Luke Bell (AUS) fell out of the race at various points. Shortis fell out on the bike while both Bell and Vanhoenacker fell out on the run after putting in gallant performances in the top four. Former double Spec-Savers Ironman South Africa champion and crowd favourite, Natascha Badmann (SUI) also withdrew after the 4km mark on the run.

Once out on the bike the lead changed hands on numerous occasions between Tissink and Vanhoenacker with Böcherer and Australia’s Luke Bell well in the mix. This tussle seemed to become the theme for the day with spectators eagerly awaiting the first big move from one of the frontrunners. For most of the bike just over a minute separated the top four men.

The defining moment came after 20km into the run as Tissink took the lead and began to create a gap albeit of a few seconds. What ensued none would have predicted as the powerful Belgian suddenly withdrew from the race at the 26km mark on the run. This left the stage wide open for Tissink although he still had to hold off a stern challenge from Böcherer and a final push from James Cunnama (RSA) who ran himself into third place.

To the sheer delight of the home crowd, Tissink not only broke the tape first but also broke Vanhoenacker’s course record coming home in a time of 08:05:36. Böcherer came in at second place 08:08:36 while Cunnama gave the crowd even more reason to cheer finishing third in a time of 08:13:18.