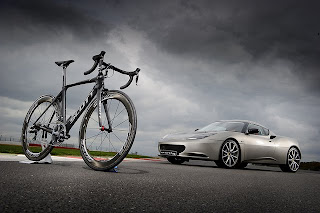 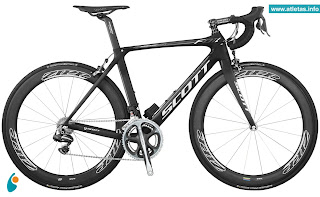 
Scott releases news of their new road weapon: SCOTT FOIL
Scott Addict has been known as one of the lightest bikes available on the market today. Just when we think they're content with the Addict, Scott decides to surprise us with the release of their newest bike, SCOTT FOIL.

From what we know as of right now, there will be 4 different versions of this new 2011 Scott Foil: Scott Foil Premium, Scott Foil Team Issue, Scott Foil R1, and Scott Foil R2. The Foil Premium, Team Issue, and R1 framesets are all made of Scott's highest Grade of carbon, HMX-NET IMP Aero Carbon Technology; While the R2
Will be made with their HMF-NET IMP Aero Carbon (20% more Compliant than the HMX-NET carbon). The frameset comes in at roughly 840g! The entire Foil line will be made with integrated carbon dropout, standard seat tube, integrated BB, and tapered headset.

Scott’s F01 project bike was ridden by some members of the HTC-Columbia team, but was conspicuously absent at their booth at Interbike. Now, after additional research and development, they are ready to roll out the all new Foil.

The FOIL will sit between the CR1 and Plasma in Scott’s line of road bikes. While the CR1 is more Comfort-Performance oriented, the FOIL is positioned as a Competition-Speed bicycle. The Plasma is an all-out TT bike that incorporates Scott Aero Science to extract drag from the bike and rider and provide more speed at less energy expense. The FOIL represents the perfect balance of Lightweight, Aero and Stiffness resulting in the most advanced Road Racing bike available.

F01 Technology is based on the theory that a partial airfoil shape without the trailing edge can produce the same aerodynamic advantage as a traditional foil shape. Modern foil shapes are largely based on models and ratios created for airplanes by the National Advisory Committee for Aeronautics (NACA), but because bicycles attain speeds far less than those of airplanes, these ratios do not necessarily apply to bikes. Scott Aero Science engineers therefore developed their F01 technology to create unique, bicycle specific tube shapes which maximize aerodynamic efficiency at lower air speeds. By implementing original, yet UCI legal ratios, and removing the typical foil’s trailing edge, Scott engineers were able increase frame strength and compliance while simultaneously lowering the overall weight compared to other ‘aero’ road frames.

Over 100 hours of wind tunnel validation time went into the F01project using Drag2Zero facilities in Mercedes-Benz Grand Prix Wind Tunnel. Starting with raw tubes, shapes were identiﬁed and built into complete test mules, and then analyzed against current competitor designs. Over 60 tube shapes were tested in order to identify the optimum “cut ratio”. The engineers selected tube shapes that are wider than normal NACA aero tubes. They were designed with a “leading edge” and a ratio of height to width that complies with UCI regulations, while still maintaining the lowest air disturbance vis-à-vis both individual tubes and the overall frame structure. The ratios of the aggregate tubes are between 6:1 and 12:1 resulting in a 9:1 average ratio, well within the UCI limits.

Built with IMP Technology and HMX carbon fiber, the FOIL comes in as the lightest bike in the Aero Road category at only 840g (1227g for frameset including frame, fork, seatpost and clamp). That is only 5% heavier than a (round tube) Scott Addict frame.

HMX carbon fiber has been produced exclusively for Scott and offers 20% more stiffness than previous materials. It is employed on all the areas that need additional rigidity. This new material also allows them to reduce weight and improve riding characteristics.

Other features include a tapered head tube, integrated cable routing and an integrated seatpost clamp.

Unlike recent aero bikes that have come onto the market, the Scott Foil will be available in a wide range of models from the top of the line Foil Premium to entry level Foil R2 with an Ultegra kit.