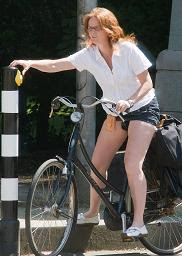 Google Maps started life in 2005 offering directions for drivers, added transit routes in 2007, expanded to pedestrian navigation in 2008 -- and now it covers bicycles, too.

The popular mapping site's introduction of bike directions follows a couple of years of grass-roots lobbying that led the Mountain View, Calif., firm to disclose plans for this feature last fall.

Google's trails-first algorithm doesn't always yield efficient results, as a request for directions from the old Washingtonpost.com offices in Arlington to the Post's downtown HQ revealed: The site suggested taking the Mount Vernon Trail over Memorial Bridge and then heading north. That's about 50 percent longer than the route I'd take -- down Clarendon Boulevard and through Rosslyn to the Key Bridge, then across town on M Street, Pennsylvania Avenue and L Street.

Google went astray in a second test when it suggested biking through Arlington Cemetery, which is -- understandably -- not allowed.

On longer routes along such mostly flat paths as the Washington & Old Dominion trail, regular cyclists may find Google seriously overestimates travel times. It suggested a trip from my home to Reston Town Center would take an hour and 37 minutes at a plodding pace of 10.6 mph, about half an hour longer than I usually take.

Google lists bike lanes and bike routes in only 150 U.S. cities, while its trail data -- based on input from the Rails-to-Trails Conservancy, a District-based nonprofit that works to reuse abandoned railroads -- spans the entire country.

Around the Washington area, Google includes such recent additions as Arlington's extension of the Four Mile Run Trail under Interstate 395 and the Wilson Bridge's bike lane.

Worse yet, Google left out almost all of the Metropolitan Branch Trail from Silver Spring to Union Station, even though many stretches of this still-under-construction route have been open for years. (One possible reason: the Rails-to-Trails site files the Met Branch Trail under an "in development" category.)

Google invites users to correct its data through an onscreen form, which I tested by filing a report about the missing 15th Street cycle track.

The target audience here seems to be less avid cyclists than bike owners who may not realize how many short trips are easily done on two wheels instead of four. In that context, Google's site is an easier choice than such competing cycle-cartography ventures as Ride the City. And once Google updates its map software for the iPhone, Android phones and other mobile devices -- which product manager Shannon Guymon said yesterday will happen "soon" -- its bike directions will be far more accessible on the road.

But the company needs to get more of its bike-route data in gear first.

Try out Google's bike directions and post your own review in the comments -- and, if you wish, your guess about when or if competing map sites Bing, Yahoo and MapQuest will match this feature.

Biking directions added to Google Maps
3/10/2010 05:00:00 AM
Whenever I meet someone who finds out that I work on the directions team for Google Maps, the first question I'm asked is often "So when's Google Maps going to add biking directions?" We're big biking fans too, so we've been itching to give you a concrete answer. I don't want to keep the good news a secret any longer, so the answer is: right now!

Today we've added biking directions and extensive bike trail data to Google Maps for the U.S. My team has been keeping close tabs on all the public support for biking directions that’s been steadily coming in, but we knew that when we added the feature, we wanted to do it right: we wanted to include as much bike trail data as possible, provide efficient routes, allow riders to customize their trip, make use of bike lanes, calculate rider-friendly routes that avoid big hills and customize the look of the map for cycling to encourage folks to hop on their bikes. So that's exactly what we've done.

Let's say you want to bike to work, or maybe you want to drive less and spend more time outdoors. Biking directions can help you find a convenient and efficient route that makes use of dedicated bike trails or lanes and avoids hills whenever possible. To find biking directions, select "Bicycling" from the drop-down menu when you do a directions search:


So, how does it work? Well, I'm based in Seattle, along with the rest of the biking directions team. The city is notoriously hilly, but also has some great trails and a strong cycling community. Let's say I'm trying to get from Golden Gardens to a friend's house in Montlake:


This route avoids hills (phew!) and puts me on the Burke-Gilman trail for most of the journey. When I need to get off the trail to cross town, biking directions makes sure to keep me on bike-friendly roads and avoid some of the city's busiest intersections. The time estimate for the route is based on a complex set of variables accounting for the type of road, terrain and turns over the course of my ride. If I decide that I want to stop at Woodland Park Zoo along the way, I can click on the blue path and drag it to my desired route — just like with driving directions — and we'll still customize the journey for cycling suitability. Over on the Lat Long Blog, you can read more about all the unique tweaks and calculations factored into our routing algorithm.

We've also added information about bike trails, lanes and recommended roads directly onto the map. This can help you get a better sense of your route, or let you find trails nearby for a recreational ride. When you're zoomed into a city, click on the "More" button at the top of the map to turn on the "Bicycling” layer. You'll see three types of lines appear on the map:

Thanks primarily to our partnership with the Rails-to-Trails Conservancy, we now have more than 12,000 miles of trails included in biking directions and outlined directly on the map. We also have data on bike lanes and recommended streets for 150 cities across the country. We'll continue to add new trail information and encourage riders to send feedback (biking directions is in beta, after all) and route information for inclusion via the “Report a Problem” tool. When Map Maker is available in the U.S., all riders will be able to directly contribute their local knowledge about trails, bike lanes and suggested routes.

We know that many of you have been anxiously awaiting this feature, so head over to http://maps.google.com/biking to try it for yourself and then hop on your bike!