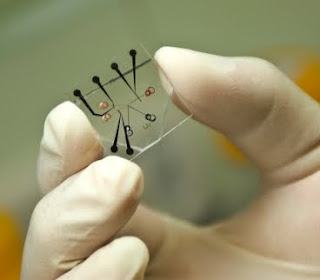 A single unit of the new desalination device, fabricated on a layer of silicone. In the Y-shaped channel (in red), seawater enters from the right, and fresh water leaves through the lower channel at left, while concentrated brine leaves through the upper channel.
A system that’s worth its salt
New approach to water desalination could lead to small, portable units that could be sent to disaster sites or remote locations.
David L. Chandler, MIT News Office

No harm, no foul


March 25, 2010
A change of mind
March 24, 2010
A single unit of the new desalination device, fabricated on a layer of silicone. In the Y-shaped channel (in red), seawater enters from the right, and fresh water leaves through the lower channel at left, while concentrated brine leaves through the upper channel.
Photo: Patrick Gillooly
March 23, 2010


Potable water is often in high demand and short supply following a natural disaster like the Haiti earthquake or Hurricane Katrina. In both of those instances, the disaster zones were near the sea, but converting salty seawater to potable fresh water usually requires a large amount of dependable electrical power and large-scale desalination plants — neither of which were available in the disaster areas.

A new approach to desalination being developed by researchers at MIT and in Korea could lead to small, portable units that could be powered by solar cells or batteries and could deliver enough fresh water to supply the needs of a family or small village. As an added bonus, the system would also remove many contaminants, viruses and bacteria at the same time.

The new approach, called ion concentration polarization, is described in a paper by Postdoctoral Associate Sung Jae Kim and Associate Professor Jongyoon Han, both in MIT’s Department of Electrical Engineering and Computer Science, and colleagues in Korea. The paper was published on March 21 in the journal Nature Nanotechnology.

One of the leading desalination methods, called reverse osmosis, uses membranes that filter out the salt, but these require strong pumps to maintain the high pressure needed to push the water through the membrane, and are subject to fouling and blockage of the pores in the membrane by salt and contaminants. The new system separates salts and microbes from the water by electrostatically repelling them away from the ion-selective membrane in the system — so the flowing water never needs to pass through a membrane. That should eliminate the need for high pressure and the problems of fouling, the researchers say.

The system works at a microscopic scale, using fabrication methods developed for microfluidics devices — similar to the manufacture of microchips, but using materials such as silicone (synthetic rubber). Each individual device would only process minute amounts of water, but a large number of them — the researchers envision an array with 1,600 units fabricated on an 8-inch-diameter wafer — could produce about 15 liters of water per hour, enough to provide drinking water for several people. The whole unit could be self-contained and driven by gravity — salt water would be poured in at the top, and fresh water and concentrated brine collected from two outlets at the bottom.

That small size could actually be an advantage for some applications, Kim explains. For example, in an emergency situation like Haiti’s earthquake aftermath, the delivery infrastructure to get fresh water to the people who need it was largely lacking, so small, portable units that individuals could carry would have been especially useful.

So far, the researchers have successfully tested a single unit, using seawater they collected from a Massachusetts beach. The water was then deliberately contaminated with small plastic particles, protein and human blood. The unit removed more than 99 percent of the salt and other contaminants. “We clearly demonstrated that we can do it at the unit chip level,” says Kim. The work was primarily funded by a grant from the National Science Foundation, as well as a SMART Innovation Centre grant

While the amount of electricity required by this method is actually slightly more than for present large-scale methods such as reverse osmosis, there is no other method that can produce small-scale desalination with anywhere near this level of efficiency, the researchers say. If properly engineered, the proposed system would only use about as much power as a conventional lightbulb.

Mark A. Shannon of the Center of Advanced Materials for the Purification of Water with Systems at the University of Illinois at Urbana-Champaign, who was not involved in this work, agrees with that assessment. In a News & Views piece that accompanies the Nature Nanotechnology paper, he writes that the new system achieves “perhaps the lowest energy ever for desalinating microliters of water,” and when many of these micro-units are combined in parallel, as Kim and his co-authors propose, “it could be used to supply liters of water per hour using only a battery and gravity flow of water.” That meets a significant need, he says, since at present there are few efficient methods for small-scale desalination, both for emergencies and for use in remote areas in poor countries.

Alex Iles, a research scientist at the University of Hull in Britain, says that while further testing must be done to establish long-term stability and fabrication techniques, “This is an elegant new concept for water desalination.” He says it is likely to produce a low-cost, low-maintenance system that could be “ideal for applications such as disaster relief.” When it was initially presented at a conference he attended last year, Iles says, “I thought it was probably the most significant new work at the entire conference, even though it was only a poster.”

The basic principle that makes the system possible, called ion concentration polarization, is a ubiquitous phenomenon that occurs near ion-selective materials (such as Nafion, often used in fuel cells) or electrodes, and this team and other researchers have been applying the phenomenon for other applications such as biomolecule preconcentration. This application to water purification has not been attempted before, however.

Since the separation occurs electrostatically, it doesn’t work for removing contaminants that have no electric charge. To take care of these remaining particles — mostly industrial pollutants — the researchers suggest the unit could be combined with a conventional charcoal filter system, thus achieving pure, safe drinking water through a single simple device.

Having proved the principle in a single-unit device, Kim and Han plan to produce a 100-unit device to demonstrate the scaling-up of the process, followed by a 10,000-unit system. They expect it will take about two years before the system will be ready to develop as a product.

“After that,” says Kim, “we’ll know if it’s possible” for this to work as a robust, portable system, “and what problems might need to be worked on.”
Publicado por cecilio benito alas en 6:00 p. m.