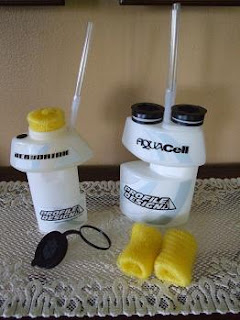 I'm relatively new to owning a triathlon bike. I just purchased mine the end of October, 2009, after racing my first season of duathlons. I'm still figuring out all the bells and whistles to add/subtract to the bike, a Cervelo P2C, as I learn more about the multisport lifestyle.

The smaller reservoir in the Aquacell is removable. You could fill this cell with water, freeze it overnight, then place it in the Aquacell on the way to your race or training session. This would be a great way to keep your fluids cool.

I mostly race in sprint duathlons and have been using Profile Designs Aerodrink hydration system, which fits between my aerobars. I've been trying to figure out a way to carry more fluid on my tri bike for my longer training rides and races. I'll be doing the 1/2 Ironman duathlon at Miami Man on November 14, which is a 1 mile run - 56 mile bike - 13.1 run event.

I did Miami Man for the first time last year, just a couple of weeks after getting my new tri bike. I know, you're not supposed to go into your key race of the year with new equipment, but what the heck, timing and budget just worked out that way. I placed 3rd Female Masters at the 2009 Miami Man, not too shabby for someone that just started racing in duathlons in February, 2009.

I went through a ton of fluid during the 56 mile bike portion of Miami Man. It was a really windy day with winds averaging between 18-21 MPH, don't know if that was why I went through so much fluid? It really wasn't that hot out, even by south Florida standards. I am looking for a better way to hydrate without having to stop at every rest stop during the bike ride. I am a bit tight on money right now and had been looking at the Speedfill system and X-labs behind the seat water bottle carriers. But both of those options are over $100 by the time you add all the necessary components.

I noticed that my local bike shop, Racer's Edge in Boca Raton, carried Profile Designs dual reservoir Aquacell hydration system. The price was right, MSRP of $34.95 and Racer's Edge price was only $28.75.The guys at Racer's Edge said there might not be enough room between my aerobars to install the Aquacell and to bring my tri bike in to make sure it would fit before buying it.

Vince Damiani at Racer's Edge slightly tweaked my aerobars open just a hair so that the larger Aquacell would fit between my aerobars. I can still use the smaller Aerodrink during my shorter training rides and sprint races. I like having the option to use either system. I plan to carry electrolyte solution in the large compartment, and water in the smaller compartment. When I eat a gel pack, shot block or other solid food, I would rather wash it down with a bit of plain water rather than a flavored electrolyte drink. Lemon lime sports drink mixed with coffee flavored gel is just kind of gross if you want my personal opinion.

Comparison of the Two Hydration Systems

Once I've gotten a few test rides in using the new Aquacell, I'll post up another review to Bike Diva.

Profile Design products can be found at many bike shops and online retailers such as Nashbar or Tri Sports. 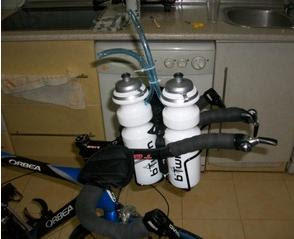