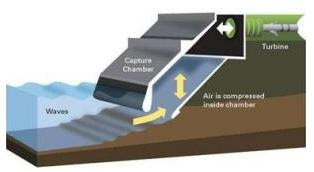 Schematic of an oscillating water column. Waves enter through a subsurface opening into the chamber with air trapped above. The wave action causes the captured water column to move up and down, pushing the trapped air into an electricity-generating turbine. The turbine turns continuously, despite the changing direction of the air stream as the waves come in and out. (Credit: Graphic courtesy / MIT Energy Initiative) 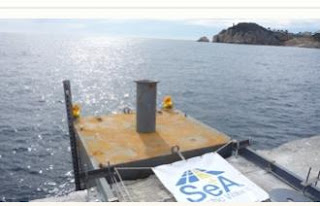 
Known as Oyster, the device has been officially launched by Scotland's First Minister Alex Salmond MP, MSP at the European Marine Energy Centre (EMEC) in Orkney.

It is currently the world's only hydro-electric wave energy device producing power and is now producing power by pumping high pressure water to its onshore hydro-electric turbine. This will be fed into the National Grid to power homes in Orkney and beyond. A farm of 20 Oysters would provide enough energy to power 9,000 three bedroom family homes.

Oyster was first conceived out of work funded by an Engineering and Physical Sciences Research grant to Queen's between 2002 and 2004, to develop surging power-wave devices.

Professor Trevor Whittaker from Queen's School of Planning, Architecture and Civil Engineering was the principal investigator and was supported by Dr Matt Folley. Aquamarine Power Ltd was formed by a Scottish entrepreneur specifically to develop the technology. Today there is a joint agreement which results in Queen's undertaking all the hydrodynamic testing for Aquamarine.

Professor Whittaker said: "The concept of Oyster came about through research in our wave-tank facility at Queen's. The launch of Oyster is both a major landmark in terms of carbon-free sustainable energy production and a proud day for Queen's University Belfast, which already has a reputation as being one of the leading wave-power research groups in the world. In fact Oyster is the third prototype demonstration wave power project which the team at Queen's has instigated in the past 20 years.

"Devices such as these have the power to revolutionise the world's energy industry and help combat climate change. And we aren't stopping with Oyster. We are continuing to work with our partners in Aquamarine Power and the EMEC to develop the next generation of Oyster, by providing testing opportunities at Queen's large wave tanks facility in Portaferry which is part-funded through the University's Institute for a Sustainable World."

The marine energy industry could provide as many as 12,500 jobs, contributing £2.5 billion to the UK economy by 2020. Marine energy such as that produced by Oyster has the potential to meet up to 20 per cent of the UK's energy demands.

"Scotland's potential renewables capacity is estimated to be around 60GW. Our waters hold around ten per cent of Europe's wave power potential and as much as a quarter of its tidal power potential. The European Marine Energy Centre (EMEC) provides world-leading test facilities for Aquamarine and other companies to develop the technology needed to harness this huge untapped potential.

"I am delighted to confirm further R&D funding of almost £1m to Aquamarine Power for the development of Oyster 2, which could be installed within two years. Through our investments and initiatives such as the Saltire Prize, the Scottish Government is working to ensure we capitalise on our rich natural resources, to meet our ambitious climate change targets, to create more high-skilled green jobs and to make a substantial contribution to one of the most pressing global challenges."

Martin McAdam, Chief Executive Officer of Aquamarine Power, said: "This is a fantastic day for the wave energy industry and for Aquamarine Power. We have proved what we always believed -- that wave energy can produce sustainable zero-emission electricity to power our homes. The UK has one of the best wave resources in the world. Now it also has the best technology.

"The announcement of nearly £1 million Scottish Enterprise funding is very welcome and will enable Aquamarine Power to attract further inward investment for the successful development of the next-generation commercial-scale Oyster. This is exactly the kind of support the industry needs. With continued support of this nature we can help decarbonise our electricity supply, and build a major, world-beating industry here in the UK."

Neil Kermode, Managing Director of EMEC said: "EMEC are delighted to see Oyster installed, running and on test. It is a tribute to both the Aquamarine Power team for their work, and also to the vision of the public sector in setting EMEC up in the first place to help developers get into the water as efficiently as possible. I look forward to Oyster being joined by many more machines in the coming years."

The Oyster launch took place at EMEC's Billia Croo site near Stromness, where the device was installed this summer.

Videos of Oyster can be found at www.youtube.com/aquamarinepowerltd

From a distance, they look like nothing more than thin red lines on the horizon, easily lost amid the tumbling blue of the Atlantic Ocean. But get closer and the significance of the 140m-long tubes, 10 years in the making by a British company and now floating in the sea off the coast of Portugal, becomes apparent: they are the beginning of an entirely new industry in the hunt for clean power.

Yesterday, the red snake-like devices were inaugurated as part of the world's first commercial-scale wave-power station, three miles from the coast of the northern Portuguese town of Aguçadoura. The project, which will generate clean electricity for more than 1,000 family homes in its first phase, marks the latest step in Portugal's moves to become a leader in developing renewable energy sources.

At the heart of the Aguçadoura power station are three cylindrical wave energy converters, designed and built by the Edinburgh-based company Pelamis Wave Power. Moving up and down on the endless supply of waves in the open sea, they convert the motion into electricity, without emitting any of the carbon dioxide responsible for warming the planet.

"Finland is very good in mobile phones, Portugal wants to be good in renewable energy. We are among the top five in the world, and we are just in the beginning of the process.

"Renewable energy is the source of energy for the future and we think this can create an industrial revolution and a lot of opportunities for jobs and research and we want to be ahead of the curve."

At peak output, the Pelamis wave machines near Aguçadoura will generate 2.25MW, enough for the annual needs of about 1,500 family homes. Eventually, the station will be expanded with a further 25 Pelamis machines so that it can generate up to 21MW of power. That will save 60,000 tonnes of CO2 per year compared with a conventional fossil fuel plant.

"If you compare it to wind energy, wave is more predictable and is more sustained typically," said Ian Sharp of Babcock and Brown, the company that built and commissioned the Aguçadoura wave farm.

Each of semi-submerged Pelamis devices is 142m long, has a diameter of 3.5m and is made from 700 tonnes of carbon steel. A single wave converter is composed of four articulated sections that move up and down as the waves pass along it. At each of the hinges between the sections, hydraulic rams use the wave motion to drive generators to produce up to 750KW of power at peak output.

The electricity generated by the three Pelamis devices will be carried by undersea cable to a substation in Aguçadoura, which will then feed the power into the Portuguese national grid.

In addition to this flagship wave power, the Portuguese are investing heavily in other renewable technologies. They are already spending £250m on more than 2,500 solar photovoltaic panels to build the world's largest solar farm near the small town of Moura in eastern Portugal. It will have twice the collecting area of London's Hyde Park and supply 45MW of electricity each year, enough to power 30,000 homes.

In the past three years, the country has also trebled its hydroelectric capacity and quadrupled its wind power sources – northern Portugal has the world's biggest wind farm with more than 130 turbines and a factory that builds the 40m-long blades.

Pinho wants Portugal to rival Denmark or Japan in its commitment to developing renewables industries – he predicts his country will generate 31% of all its primary energy from clean sources by 2020, compared with Britain's target of 15%. The Portuguese target means increasing the generation of electricity from renewable sources from 42% in 2005 to 60% in 2020.

The €9m (£7.14m) first phase of the Aguçadoura project, which involves the energy firms Enersis and Energias de Portrugal, has been helped partly by the Portuguese government agreeing to guarantee a premium for the electricity the station will generate via a feed-in tariff of 25c per KWh. The project has also been given a €1.25m grant from the Portuguese Agência de Inovação.

"The Portuguese government has moved forward on wave energy more quickly than has happened in the UK," said Sharp.

"[In Portugal] we have a feed-in tariff arrangement so we had a guaranteed price for the power that was produced and you don't have that in the UK. The environment here was better to stimulate development."

Parr said there could be dire consequences for the UK unless the government got its act together in developing renewable industries: "There is a danger that jobs, investment and clean energy will go overseas because of Hutton's obsession with old technologies like coal and nuclear power.

"It's time we stopped the rot before our performance on renewables becomes a national disgrace."

Friends of the Earth's renewable energy campaigner, Nick Rau, said that wave and tidal power could play a significant role in tackling climate change and reducing the UK's dependency on fossil fuels. "The potential for this technology in the UK is enormous - but the government is not doing enough to develop it."

In the UK, Pelamis is also involved in the South West Development Agency's project to build a wave power station off the north coast of Cornwall, called Wavehub. This will be the UK's first offshore facility for demonstrating a commercial-scale wave power plant - but it is not expected to be operational until at least 2010. The SWDA estmates the project could create 1,800 jobs and inject £560m into the British economy.

· This article was amended on Thursday September 25 2008. We should have made it clear that Manuel Pinho's prediction that Portugal will be generating 31% of all its "power" from clean sources by 2020 referred to primary energy. Also, we implied that Portugal generates 20% of its electricity from renewable sources. This figure should have been 42%. These errors have been corrected.