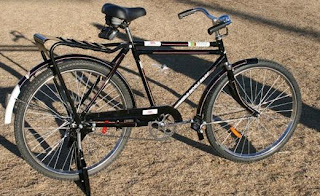 World Bicycle Relief has become one of the most important and powerful charity organizations in the world by distributing incredibly durable bikes across Africa, positively leveraging human power in ways only the bicycle can.

The WBR organization, started in 2005 by Trek and SRAM, was recently ranked 12th on Barron’s Best Givers list, putting them into the good company of the Bill and Melinda Gates Foundation and George Soros’ Open Society Foundations. WBR has given away more than 75,000 bicycles since it began.

The organization’s stated mission is to “provide access to independence and livelihood through the power of bicycles.” The problem is, most bicycles sold in Africa are not robust enough, falling apart shortly after purchase and becoming a wasted investment. To turn that trend around, WBR designed durable and functional bikes to fit the needs of those who need the most.

The bikes are designed from the ground up to be as indestructible as possible. They’re deliberately high quality rather than low cost; “cheap is expensive” rings true with the abuse and difficulty of finding replacement parts. Nonetheless, cost per bike is only $134. And while most bicycles are donated, many are also purchased by locals. The WBR Buffalo bike is sought after due to its particular robustness.

Each bike, now in its third version, weighs 53 pounds, and has a rack that will hold 220 pounds without issue. Tubing is oversized 16-guage steel, chainrings are a super wide 3m and are connected to a coaster brake hub with sturdy chain built with 1.2mm plates. Tires are automotive grade and are filled with thick, puncture resistant tubes.

When things do go wrong, World Bicycle Relief trains and equips at least one mechanic for every 50 bikes, creating a network of technicians able to help keep the fleet on the road (or dirt, as it may be). Each bike comes with a flat kit, pump and lock.

Education is the primary message of World Bicycle Relief. To that end, 70 percent of its bicycles are donated to girls. In Africa, girls are the first members of the family taken out of school to help at home. WBR is working to stop this.

In a clever piece of organization, the bicycles are given to schools, not individuals. Each school has a panel of community leaders that decides how to distribute the bikes. A contract is then signed between the recipient of the bike, his or her parents and the school panel. In the contract it clearly states that the recipient may only keep the bike as long as they attend class. This keeps children learning and at the same time provides the family with a valuable resource, the bicycle.