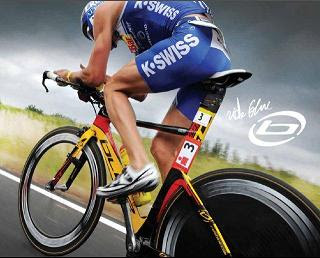 Beginning with a small team of dedicated cycling professionals, we have set out to build the best racing bikes in the world. We carefully choose the right materials, combine that with engineering expertise, add to that the knowledge that comes from decades of racing experience all to produce a frameset that is designed with one purpose in mind

- create bicycles that are built to win.

There was a need for a company that could design and build the same world class framesets that were capable of giving elite athlete a competitive advantage and offer those same, identical frames to the amateur athlete or serious enthusiast. That's how Blue Competition Cycles got its start.

SPECIFICATIONS:
Choose a build kit below for complete bike pricing.

Contact Info
Blue Competition Cycles
6161 Atlantic Blvd.
Norcross, GA 30071 US
P: 800.470.2606
F: 800.849.4774
.-.--.-.-.-.-.-.-.-.-
Dr. Amanda Stevens, the reigning Ironman 70.3 U.S. Pro champion, will be riding Blue again when defending her title this coming April in Galveston Island, Texas.   Blue Competition Cycles Inc., the official bike of USA Triathlon, today announced that Stevens has agreed to ride the all-new Blue Triad SL as she sets out to build on her success during the 2011 season.  Along with being the first American woman to cross the line at the inaugural Ironman 70.3 U.S. Pro Championship, Stevens captured the Ironman 70.3 Cancun event with a wire-to-wire performance in the oppressive Mexican heat and humidity. The victory came just three months after Stevens underwent gallbladder surgery. Stevens also finished fourth at the Foster Grant Ironman World Championships 70.3, just 28 seconds off the podium.

When Stevens takes to the bike course this year, she'll be even better equipped to improve on her times aboard the 2011 Triad SL, the same ride Germany's Andreas Raelert debuted to a second-place finish at the 2010 Ironman World Championships in Kona, Hawaii.


About the 2011 Triad SL: Built using T800 and T1000 high modulus carbon fiber, the state-of-the-art Triad SL, like all Blue bikes, is "Built to Win." By incorporating breakthrough innovations from previous Triad models as well as our AC1 road frames, we have created our fastest, lightest and best-performing Triathlon/TT bike yet. Along with increasing the surface area of the bike's head tube for improved aerodynamics, the new Triad SL also features Super Flow Tube Technology (SFT2) first used on AC1 and AC1SL road frames. To improve adjustability, the 2011 Triad SL features an Aero seat post instead of the previous fixed seat mast as well as wider chains to incorporate the use of many wider wheel models now being introduced.

More on the Triad SL is right here.
http://rideblue.com/triadsl.php

Also, Amanda was kind enough to send us this great vid clip to express her excitement about riding Blue for 2011!