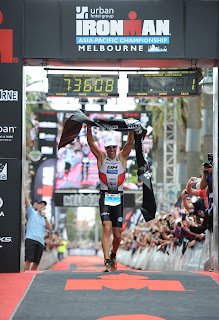 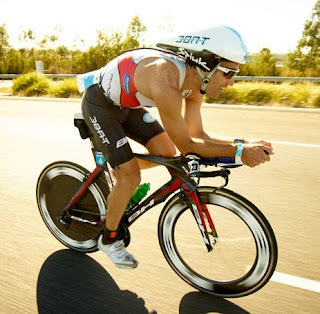 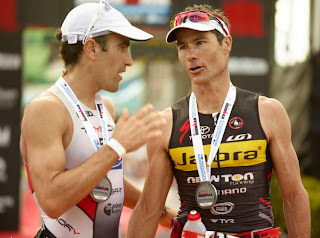 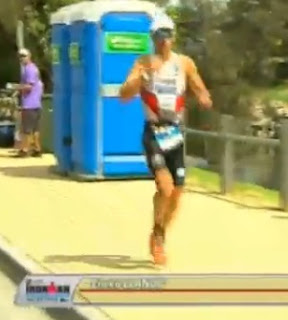 The official timing splits for the men through 33.8 km: 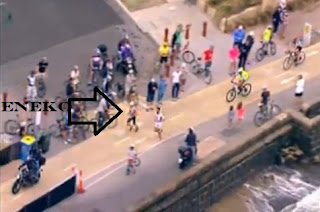 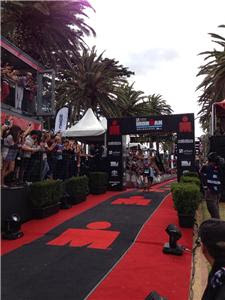 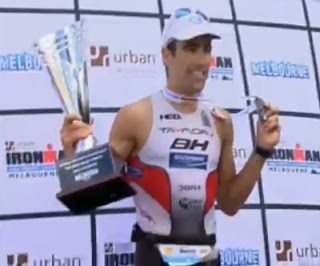 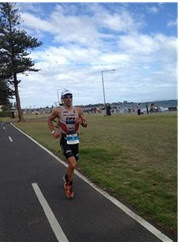 Written by: Dan Empfield
Date: Sat Mar 23 2013
You have to have a good swim, bike and run to win an Ironman. You also have to have a lot of patience, and that might have been the difference for Eneko Llanos.

After a windswept weather-shortened swim, to 1.5k, a gaggle of Aussies led through the early stages of the 180k cycling leg. The Belgian Marino Vanhoenacker quickly made up a roughly 2 minute swim disadvantage to join the Aussie party on the first of two laps of the bike course. Shortly after beginning the second lap Vanhoenacker employed the same strategy that seemed certain to work last year in Kona — until it didn’t — quickly putting space between himself and all followers. It looked as if the tall Belgian had figured out the pacing a little better this time, especially with the cooler temperatures that even featured an occasional drizzle.

Speaking of cool, the Spaniard, not far removed from his impressive win at Abu Dhabi, kept his. Llanos did not panic when Vanhoenacker motored away, choosing to stay with a group that included Craig Alexander, Tim Reed and Clayton Fettell. Vanhoenacker crushed the bike leg with a 4:22:32 split, with Llanos posting the second fastest split of the day in 4:28:50. The Belgian looked as if he’d gauged it well, preserving his lead through 10 miles while holding a 2:45 marathon pace. Llanos and Alexander were together during the first half of the run, passing the 10-mile mark with still about 4 minutes worth of deficit to make up.

But then the Aussie superstar began to fade, and Llanos took up the pursuit in earnest, and alone. Vanhoenacker was not exactly folding, but the math was in the Spaniard’s favor. Finally, at mile-23, Llanos took up his spot behind the lead vehicle. Llanos coasted in with a time of 7:36:08, obviously not a record for the distance because of the shortened swim. He ran a 2:43:35.
There was no question, after the pass, who would win the race, rather whether Vanhoenacker would spectacularly hit the wall as he did in Kona or whether he’d marshaled his resources well enough to keep second. He held it together this time, turning in a very respectable 2:51:28 to finish in 7:38:59.

Chris Legh, 41 years young, was the fastest runner in the early stages, rocketing through 10 miles in a pace well under 2:40 for the marathon, moving from 8th off the bike to, at one point, 4th place. American Jordan Rapp had a steady, quiet, almost invisible race all day long, exiting the water outside the top-25, finishing the bike in 7th place, with the day’s 6th fastest split, and then unobtrusively moving through the field to finish 4th on the day. Legh came back to earth after what seemed like a kamikaze pace, but he held it together and came home fifth, running a 2:51:44 marathon.

There is a bright new face in women’s racing, and she’s making up for lost time. Corinne Abraham is a 36 year old Englishwoman, who was an age group racer just 2 years ago, and has been a triathlete for all of 4 years. She exited the water in 15th place, almost 7 minutes behind Amanda Stevens. During the early stages of the ride it was a familiar face, 46 year old Natascha Badmann, rocketing to the lead. But Abraham, who has been hanging around the podium but has rarely if ever topped it, in any race, throttled the field with a 4:42:09 bike split. To put this in perspective, Per Bittner finished in 6th place... with a bike split 1 minute faster than Abraham’s. She only rode 11 minutes slower than Rapp, and 6 minutes slower than Legh. She beat Caroline Steffen’s bike split by 11 minutes, and “Xena” had the second fastest women’s split of the day.

While Abraham was a virtual unknown prior to the race, by the time she took the lead during the bike ride it was almost a fait accompli that she would win — she ran 3:01 at Ironman Texas last year. She did nothing but extend her lead as the race progressed. Dutchwoman Yvonne Van Vlerken —representing Austria, oddly — overtook Steffen for second, but second and thereafter were in another race altogether. Abraham’s was truly a Wellington-style performance, capping her Herculean bike ride with a 2:56:50.

In what many are calling a Wellington-like performance, Abraham shocked the women's field and dominated the bike and run. Photo: Delly Carr


Spain’s Eneko Llanos earned the victory in the final miles of the race, while Great Britain’s Corinne Abraham surprised the women’s field at Ironman Melbourne.

The second running of Ironman Melbourne started with plenty of pre-race drama. On Saturday morning, race officials announced that the planned one-lap 2.4-mile swim would be turned into a two-lap affair due to anticipated windy and rough water conditions. Then on the morning of the event, officials made a decision to cut it down to a one-lap, 1.2-mile swim and delay the start. After a morning of change and uncertainty, the pro men kicked off Ironman Melbourne at 8:17 a.m., with the pro women following at 8:20 a.m. The winds that caused the change in plan on the swim also heavily affected the bike race. Ironman.com reported that it took the men approximately one hour and 17 minutes for the first 45K into the wind and just over 55 minutes back on that same stretch. For the women, the first 45K took 1:26, while the return happened in a mere 58 minutes. In the end, the athletes who overcame the tough conditions and posted the fastest run splits of the day took the victories and valuable Kona Pro Ranking points.

Men’s Race
As expected Australia’s Clayton Fettell led the men out of the water. The shortened swim hurt Fettell (who was reportedly extremely frustrated by the swim news on race morning) and fellow strong swimmer Joseph Lampe (AUS) as the main pack exited within a minute of them. Adding to that disadvantage is the fact that the swim was likely even shorter than 1.2 miles as the main pack exited the choppy water in what would be a blazing time of 20 minutes. Last year’s winner, and three-time Ironman world champ, Craig Alexander (AUS) and Llanos were 30 seconds back of Fettell. Vanhoenacker came into T1 two minutes back and quickly went to work.

After a few different athletes took turns at the front, Vanhoenacker made his move and, in a tactic similar to what he showed at the 2012 Ironman World Championship, took the lead on his own on the windy Melbourne course. Aware that Vanhoenacker is the current Ironman world-record holder for a reason, Alexander urged his fellow competitors not to let the Belgian get too far away. He got little help and the lead of Vanhoenacker only expanded to T2.

Vanhoenacker started the marathon with a five-minute gap on Alexander, Fettell and Llanos. Vanhoenacker maintained his spot out front while Alexander and Llanos, who had dropped Fettell, ran side-by-side throughout the early miles of the run. Eventually Llanos broke away from Alexander and became the closest pursuer to Vanhoenacker. As the end of the race neared, Vanhoenacker started to struggle and opened the door for Llanos. Llanos passed a struggling Vanhoenacker with less than six km to go. Llanos’ 2:43:35 marathon was by far the fastest of the day, giving him the overall win in 7:36:08. Despite his dramatically slower pace, Vanhoenacker was able to narrowly hold off Alexander for second. He finished in 7:38:59, with Alexander rounding out the podium at 7:39:37.

Women’s Race
As two of the fastest swimmers in women’s long-course triathlon, Americans Meredith Kessler and Amanda Stevens also faced a stark disadvantage with the shortened swim. The pair exited the water at just under 22 minutes, giving them just over a 90-second advantage over Australia’s Lisa Marangon and Canada’s Tenille Hoogland. Pre-race favorite Caroline Steffen (SUI) came into T1 less than three minutes back and quickly went to work on the bike. The three athletes who gained the most advantage from the shortened swim leg were slower swimmers Yvonne Van Vlerken (NED), six-time Ironman world champion Natascha Badmann (SUI) and Abraham. The change in the race distance immediately put them in the mix from the beginning of the bike.

At the end of the first of three laps on the bike, 46-year-old Badmann held the lead with Steffen, Van Vlerken and Kessler not far behind. Despite the strong bike efforts by several women, it was Abraham who dominated the 112-mile ride and came into T2 with a lead of five minutes over Badmann. Kessler and Steffen followed Badmann onto the run course. Abraham backed her field-leading bike split with an equally strong marathon. She closed out her race with a 2:56:50 run split to take the 8:10:56 victory, her first at an Ironman. Van Vleken ran the marathon in 3:00:45, propelling her from sixth off of the bike to second at the finish line. Steffen finished in third, with Badmann claiming fourth.