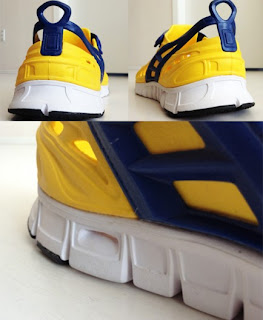 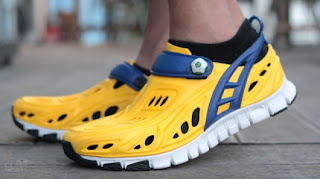 By Dave LeClair April 18, 2013
EVA (ethylene vinyl acetate) is a soft foam composite used in all kinds of sports equipment, including ski boots, and, in recent years, shoes. The brand most people associate with this type of shoe is Crocs, and its colorful and comfortable clogs. Crosskix is a new name looking to make waves in the market with an EVA shoe that looks much more like a traditional sneaker, while still offering the same benefits of other EVA footwear.

View all
Like the competition, the Crosskix sneakers are pitched as being light, comfortable, easy to clean, wearable in all kinds of conditions (including in water), and affordable. The major difference between these and other EVA footwear is the functionality. Unlike most EVA shoes, which are meant to be comfortable shoes for lounging around in, these shoes are designed for athletic activity.

Though they're not going to replace a basketball shoe or football cleat, the creators do recommend them for running and for foot recovery after playing sports or taking part in other strenuous activities.


Unlike your average sneaker, which will probably need to spend some quality time in the washing machine to remain fresh and clean, the Crosskix sneakers can simply be hosed down.

The man behind Crosskix, Eric Saligumba, is seeking funding for his Crosskix shoes on Kickstarter. The project got off to a weird start, with it being pulled in the middle of funding due to a change in the required goal (which was actually lowered), but it is back now, and it's blown past its US$20,000 goal.

There are still a limited number of pairs available at the second early-bird tier for US$39. Once those run out, there is a second limited run available for $44. After that, the final price is $49. 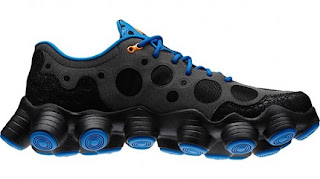 SPORTS
Reebok ATV 19+ shoes are ready for anything – including snickers

It’s no coincidence that Reebok’s goofy-looking new running shoe, the ATV 19+, shares its acronym with that of All-Terrain Vehicles. Like the wheeled and motorized ATVs, the shoes feature a wide stable stance, big lugs, and independent suspension (within each of those lugs).

View all
Each shoe's sole has a total of 19 lugs, which are tipped with grippy carbon rubber. The idea is that the big, widely-separated lugs will be able to get down through loose dirt, sand, snow or whatnot, to the firmer ground beneath. Additionally, all of the outer lugs are beveled at a 28-degree angle, to act as stability-enhancing outriggers.


The shoes’ less eye-popping uppers feature a ballistic mesh base layer, and synthetic leather heel and toe caps. There’s no word on how much a pair weighs, which would certainly be interesting to know.

The Reebok ATV 19+ is available now in three color combinations, for US$139.98. They can be seen getting all tough and nasty in the video below.