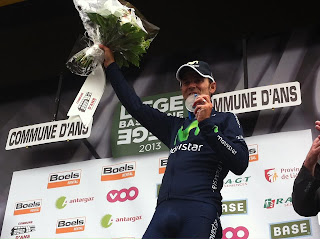 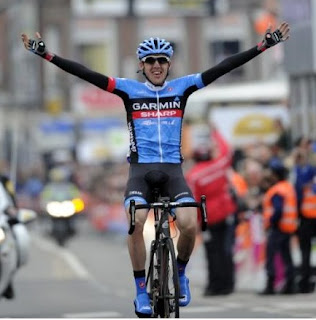 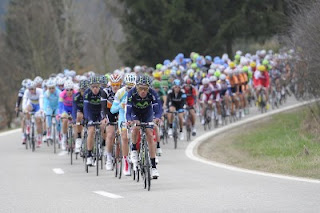 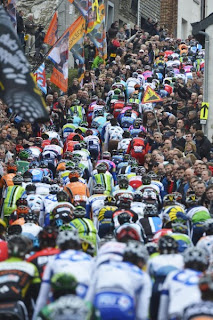 By: Daniel Benson & Jane AubreyPublished: April 21, 16:15, Updated: April 21, 17:24
Do you like this?
Irishman adds first Monument victory to palmares

The chases couldn't stop Garmin from pulling off a famous win …

Joaquim Rodriguez Oliver Katusha) had to settle for second place …

Rodriguez, Martin and Valverde make up the Liege-Bastogne-Liege …
PreviousPage 1 of 4Next
Daniel Martin (Garmin-Sharp) won a thrilling Liege-Bastogne-Liege, powering clear of Joaquim Rodriguez (Katusha) in the final few hundred meters to seal his first Classics victory. The Irishman was set up for the win by teammate Ryder Hesjedal who attacked on the penultimate climb of the race and then held a crucial chase group together before the final drag to the finish in Ans.

Martin, who came into the race as one of the favourites following his fourth place in La Fleche Wallonne, jumped onto Rodriguez's wheel when the Spaniard attacked with one kilometre to go and then distanced the Spaniard with the line in sight.

"I can't believe it, I'm really in shock," said Martin. "I've never seen the team ride so strong - they kept me protected all day. It felt like one of the easiest races I've ever did. It really is incredible, I'm so happy."

When an early break of Sander Armee (Topsport Vlaanderen - Baloise), Bart De Clercq (Lotto Belisol), Vincent Jérôme (Europcar) plus IAM Cycling teammates Jonathan Fumeaux and Pirmin Lang reeled in on the lower slopes of the Côte de la Redoute the real racing began in earnest. Team Sky, BMC and Katusha had controlled much of the early action up until that point but with a race route altered due to road works, caution appeared to temper the peloton's aggression. An early attack from the favourites on the Côte de la Redoute would have been foolish, but when David Lopez attacked on the lower slopes of the climb panic began to reign.

Sky boxed the front, and only a prowling Philippe Gilbert (BMC) was allowed to move up but in the heat of the moment Jakob Fuglsang (Astana) and Rui Costa (Movistar) were able to join Lopez.

Damiano Cunego (Lampre-Merida), keen to remind everyone and even himself of the abilities he once had, launched himself up the road in pursuit. It wasn’t the Cunego of old, though, and even with the help of Romain Bardet (AG2R La Mondiale), Alberto Losada (Katusha), Mathias Frank (BMC) and Pierrick Fedrigo (FDJ) the merging groups were only given a maximum of 18 seconds.

Behind them Astana and BMC mustered the troops while Garmin-Sharp kept their powder dry.

Even when Cunego led a second raiding party Garmin-Sharp kept their sharp wits about them, only Alex Howes playing a role as he brought his leaders to the front.

Alberto Contador (Team Saxo-Tinkoff) was the first genuine contender to attack from the field on the Côte de Colonster. The Spaniard had played down his chances on the eve of the race and there was certainly a spark missing from his normally distinctive attacks. He lumbered rather than led and was quickly bridged to by Ryder Hesjedal, Carlos Betancur (AG2R La Mondiale), Rigoberto Uran (Sky), Igor Anton (Euskaltel-Euskadi), Giampaolo Caruso (Katusha) and Rui Costa (Movistar). So much for the pre-race prediction that the Colonster was not decisive enough to force a split.

World champion Philippe Gilbert was unable to follow, and although Pierre Rolland (Europcar) briefly threatened, the Frenchman was brought to heel by the top of the climb.

Hesjedal had no intention of being so subservient and attacked Contador and his companions before the top of the climb. The Canadian flew down the descent as if his life depended on it, forcing BMC and Astana to regroup. The move dragged the Giro d’Italia champion 20 seconds clear and with Martin marking moves in the peloton Garmin’s cards were beginning to pay off.

By now even the leaders were starting to show their fatigue. Valverde gripped the bars and hoped that a sprint would ensue, while Rodriguez looked back and saw that Astana and BMC were closing in. It was now or never and with 1km to go the Spaniard attacked. Scarponi was the first to respond before Martin leapfrogged the Lampre man. Martin then took over and in the space of 500 meters the Irishman went from the doldrums of Classic nearly-man to a Monument champion.

It took a number of attacks to get there, but after 10km of racing the day's break established itself under overcast skies in the way out of Liège.

The Côte de Wanne saw BMC and Movistar with a concerted effort at the front of the peloton with the breakaway's advantage hovering around six minutes, but the bunch was stretched in the process. Next up, the Côte de Stockeu forced the breakaway to split under pressure, with Lang dropping behind but eventually making contact again with 90km to go and the gap at 5:29.

The Col du Rosier, the highest point in the race at 565 metres marked the spot for Team Saxo-Tinkoff, as they accelerated off the front of the bunch via Mads Christensen and Chris Anker Sørensen. The move took another 15 seconds off the six leaders' advantage and with 70km to go, the breakaway had just 2:56 over the peloton. Through Spa and the Côte du Maquisard was next, this time Astana leading the charge up the climb, with RadioShack and Sky in the wheels behind.

Armee was dropped from the front group on the Maquisard and seemed content to let his companions drive on ahead, the peloton continuing to close in with four climbs left in the race. De Clercq was next to drop out of the breakaway, suffering mechanical issues and receiving assistance from neutral service and eventually the team car with a spare bike. At least 30 seconds back, the Belgian's day looked to be over with 57km to go. De Clercq made it back to the lead group seven kilometres later, but the quintet’s lead had been cut considerably, now down to 1:28 following the Mont-Theux.

Sky firmly had charge of the pace-setting for the peloton, with Froome and Porte the last of their intact squad at the front of the bunch. Vincenzo Nibali (Astana) was hovering nearby, as was Philippe Gilbert (BMC) with his home town just ahead with thousands of fans awaiting his arrival, while Maxim Iglinskiy (Astana) was one of the last men in the bunch.

The Côte de la Redoute ahead, the jostling for position at the front of the bunch began in earnest, with Sky gaining company from Lampre-Merida, AG2R La Mondiale, Omega Pharma-QuickStep and BMC. The gap continued to drop under these conditions and with 41km to go, it was down to a minute.

Andrei Amador (Movistar) crashed on a left-hand bend with 40km to go, taking several Cofidis riders with them, no doubt causing concern for Alejandro Valverde's chances.

The ascent of the Redoute brought multiple attacks, first from Vincent Jerome (Europcar) with David Lopez (Sky), Jakob Fuglsang (Astana) joining him in the charge.