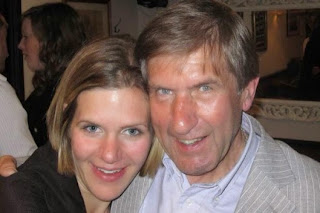 No prosecution after London cyclist is run down from behind


In February this year Michael Mason a 70 year old designer and teacher was hit from behind while cycling home on Regent Street. He suffered multiple severe injuries and died in hospital without regaining consciousness on 14th March 2014.

At Westminster Coroner's Court his daughter Anna, pictured above with Michael, read out a tribute to her father. She concluded "Mick was a quiet, sensitive, unflamboyant man (except for his taste in bright clothes and necklaces, some of which he made himself), but as the old phrase goes ‘still waters run deep’. He was exceptionally intelligent, caring for others and, above all, a man who adored his family and would do anything for them." The full statement is on Ross Lydall's blog page.

The car driver gave evidence to the Coroner that she did not see Michael or a bicycle before the crash. She said: "It felt like something had fallen from the sky, I was totally unaware of the cyclist, I heard an impact." At first she thought she might have hit a pedestrian.

The police evidence showed that her car had hit Michael's bicycle from behind, directly in front of the driver. When questioned she accepted that if the cyclist was in front of her then she should have seen him. Other witnesses had seen Michael cycling on the very well lit Regent Street. The bright red light and reflector on his bike should have made him unmissable to a driver paying attention to the road.

The police investigating officer told the court that they had decided that there would be no prosecution of the driver. It is not clear why this decision was made and London Cycling Campaign have written to the police asking for more details. There is a short summary of the evidence on The Cycling Lawyer blog page.

LCC's Road Danger Reduction campaigner, Charlie Loyd, commented: "We have serious concerns about this, and similar crash investigations. The law is quite clear that carelessness is a crime. It is against the law to cause death or injury from driving or riding in a careless way. A full prosecution is the only way to test the evidence. Road justice must be seen to be done.

"We have been campaigning for greater transparency and full information about the decision to prosecute or not following injury collisions. A report for Transport for London in 2012 showed there was no regular analysis of how or why these decisions were made."

One commentator has suggested that the police may not have prosecuted if they thought a jury would let the driver go free. Jury members, many of whom are drivers, are relucted to convict for careless if they think "I might not have seen the cyclist either".

Further evidence to the Coroner suggested that the driver was accelerating from 20 mph on this 30 mph street. While neighbouring boroughs and the City of London have introduced area wide 20 mph speed limits Westminster Council still allow 30 mph in the centre of West End.

This week we heard of the plans for quietway Central London Bike Grid routes which might allow a safer alternative to Regent Street. We have been waiting decades for sensible routes in this area. Speaking to the London Assembly on Wednesday the Mayor's Cycling Commissioner Andrew Gilligan expressed his concerns that this project was behind schedule and may not be delivered.