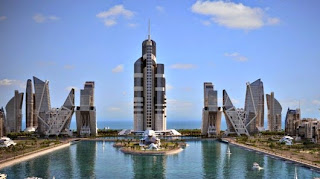 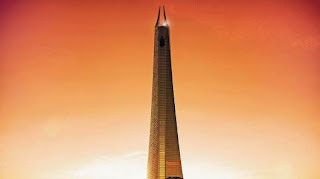 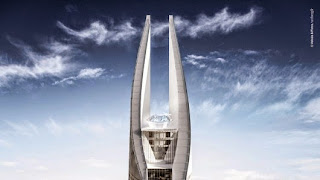 In June 2015, Dubai-based Middle East Development plans to begin work on a new skyscraper that will be the tallest in Africa. Based in Casablanca, Morocco, the mixed-use tower will rise to a height of 540 m (1,771 ft), easily dwarfing all other buildings on the continent.

The building tapers upwards into two bladesMultinational Architecture firm Valode and Pistre handled the design of the building, whic...The 540 m height is said to reflect the total number of African countries (54 is approxima...Its 114 stories are said to honor the same number of chapters (or surah) in the QuranView all
The project is being developed under the working title of Al Noor Tower (Tower of Light), though Middle East Development hopes that Moroccan king Mohammed VI will give the firm his blessing to name the building in his honor. Once complete, it will be over twice the size of Africa's current tallest building, the Johannesburg-based Carlton Center, which was completed in 1973 and reaches a height of 223 m (732 ft).

For example, the 540 m height is said to reflect the total number of African countries (54 is approximately correct, though certainly up for debate), while its 114 stories are said to honor the same number of chapters (or surah) in the Quran. Finally, Al Noor Tower's facade will sport a 1,000-pattern design which signifies Africa's rich languages, which exceed 1,000.

The budget for the project is estimated at around US$1 billion, and it is expected to be completed in 2018.