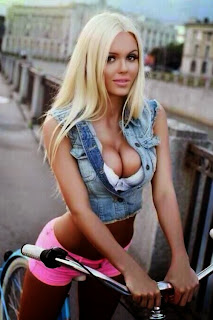 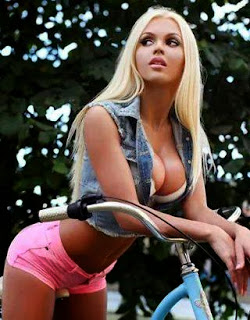 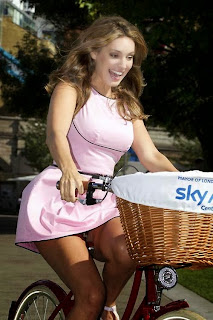 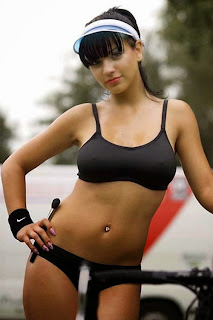 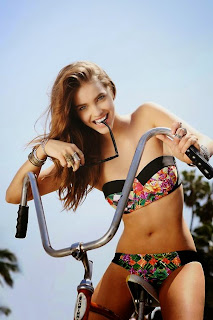 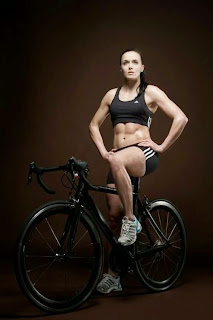 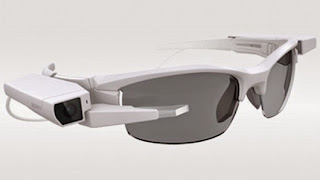 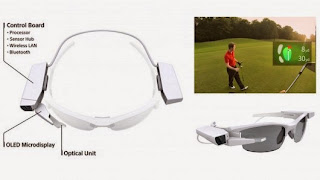 By Chris Wood December 17, 2014
Sony’s latest swing at wearables is one of its most interesting to date, taking the form of a smart headset module designed to clip onto just about any pair of glasses. The unnamed prototype hardware is capable of standalone functionality and incorporates a single, pixel dense OLED display.

In light of its dire financial situation, Sony has put a renewed focus on innovation of late. Just last month we saw its undercover E-Ink watch surface, and the company has now turned its attention to head-mounted wearables, encouraging developers to get on board with its new prototype module.

There are a couple of interesting things about the new hardware, the first of which is its apparent universal compatibility. Unlike most smart glasses we’ve seen up until now (including the company's own SmartEyeglass concept), Sony’s new prototype is designed to clip onto just about any eyewear, whether it be a pair of fashion glasses, sunglasses or goggles. It weighs just 40 g (1.4 oz), and consists of a pair of modules that sit above each ear, along with a single 0.23-inch display.

The headset packs in an ARM Cortex A7 processor and 400 mAh battery
That tiny screen is the second most compelling aspect of the prototype. Sony has worked to develop all new technology for the device’s OLED Microdisplay, achieving a contrast ratio in excess of 10,000:1 with 100 percent of the sRGB color space. It also developed new light shield tech, lowering pixel size, improving aperture ratio and outdoor readability.

Despite its diminutive size, the display packs a resolution of 640 x 400, and like Google Glass, it isn’t designed to dominate the user’s field of view. According to Sony, it’s equivalent to viewing a 16-inch screen from 2 m (6.6 ft) away.

Moving away from the display, Sony has packed a lot into the module, including an ARM Cortex A7 processor and a 400 mAh battery, as well as both 802.11b/g/n wireless and Bluetooth 3.0 connectivity.

A range of concept applications for sport
Rather than shooting for an initial consumer release, the company intends to supply a limited number of units to developers, along with an SDK. Interestingly, developers could either choose to host an application on a connected smartphone, or load it directly onto the module itself, creating a standalone device.

Sony believes that the wearable can fit many use cases, but none more than sports. It suggests athletic uses like hands-free cycling data, augmenting a round of golf with live course maps, or pairing with a smartphone to provide live action cam feeds. 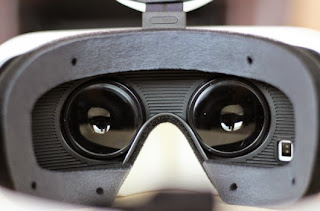 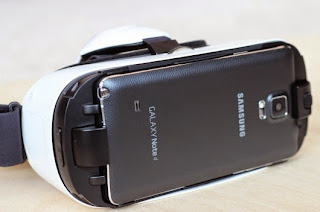 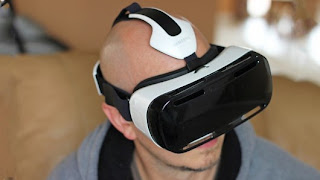 When we met with Oculus VR earlier this year, the team mentioned that future versions of the Rift headset could skip the PC, and instead use mobile devices for brains. Now we see what they were cooking up. Read on, as Gizmag reviews Oculus' collaboration with Samsung, the Gear VR Innovator Edition.

When done well, virtual reality is mind-bending, completely immersive and loads of fun (and, in case you haven't heard, Oculus does VR very, very well). Though the Gear VR is officially a Samsung device, the experience of using it is right on par with using a Rift development kit. Its software is even powered by Oculus. Unofficially, the Gear VR is the first commercial version of an Oculus headset.

The big difference with the Gear VR (and this is where Samsung comes in) is that it doesn't have any cables connected to a nearby PC. Instead you slide a Galaxy Note 4 smartphone into the front of the headset. The Note provides the display, software and processing power, while the headset provides the lenses and shuts out your (real) environment.

The Note 4 limits how long you can 'stay inside,' but at least it's wireless (Photo: Will ...
If you don't own a Galaxy Note 4 – or don't plan on owning one anytime soon – then this isn't the VR headset for you. But hey, if it's only going to be compatible with one phone, at least it's one of the best phones of the year. It's not like Oculus supported a headset that requires a three-year-old BlackBerry or an Amazon Fire Phone.

The Note's 5.7-in Quad HD display delivers the goods, with virtual environments that look pretty darn sharp (each eye sees 1,280 x 1,440 resolution). The Oculus Crystal Cove prototype we handled early this year only used a 1080p display, and small in-game characters and environmental details are noticeably crisper in the Gear VR.

Describing modern virtual reality to someone who hasn't used it is like trying to describe red or blue to someone who was born color blind. On a technical level, you know that you're looking at software displayed on the Note's screen through a pair of convex lenses, with sensors tracking your head movement. But on an experience level? You're teleported into a virtual world. You're stepping into the Matrix.

Non-virtual forms of gaming and entertainment may engage you emotionally or psychologically, but, when watching Game of Thrones, no part of you forgets that you're parked on your couch with a bag of Cheetos. VR messes with your brain's perceptions in trippy ways that legacy entertainment never could. When I come out of a VR session, I'm sometimes startled to see my real environment. I was just in a dungeon, hacking at ghosts with a sword, and now I'm sitting in my living room looking at two golden retrievers. Bizarre.

It's like a teleportation machine that can take you any place that a software developer (or photographer) can imagine taking you. By now it sounds cliché, but VR could completely change the ways we experience entertainment.

Gear VR headset (Photo: Will Shanklin/Gizmag.com)
Back to the hardware itself, the headset is made of a light-feeling, black and white plastic that looks a bit like something a Stormtrooper actor would wear on a Star Wars set. You have volume buttons, a back button and a touch pad on its right side, and a wheel on top to focus the lenses. Two adjustable straps wrap around the sides, and another on top, to keep things comfortable and in place.

If you wear glasses, you'll need to take them off before "going in," but you can adjust the Gear's focus so that content will look clear even without wearing any corrective lenses. It's not unlike adjusting your vision in an optometrist's chair.

The Note 4 plugs into a micro USB port that lives on the front side of the headset (if you use lock screen security on the Note, you'll need to unlock your phone before plugging it in). At that point the Oculus Home UI usually fires up automatically ... though several times we looked through the lenses only to see a closeup of the Note's weather app. If that happens, you have to remove the phone and put it back again (not a big deal, but it happened enough to warrant a mention).

It looks kinda weird from the outside, but wait until you see it from the inside (Photo: W...
Once in the Oculus software, you can browse the currently available software, download new apps and play ones you've already downloaded. The selection isn't yet amazing (there's a reason Samsung is pitching this to developers and early adopters), but the launch library is better than we thought it would be.

There are several forgettable novelty games in the bunch, as well as some non-interactive videos (like a Cirque du Soleil performance as well as undersea and space explorations).

There are, however, two games that stand out as AAA showcase pieces: HeroBound, a Zelda-esque dungeon-based hack-and-slash game, and Dreadhalls, a 3D first-person horror adventure (both are free). Neither would be an amazing game on a PS4 or Xbox One (they're both fairly repetitive in their current forms), but the VR is so all-encompassing that our pickiness goes out the window. When you're immersed in a 360-degree environment, it becomes less of a game and more of a journey.

HeroBound on the Gear VR, though screenshots can't possibly do virtual reality justice
Many apps and games let you get by using the Gear VR's touchpad, but for the most advanced games (including those two), you'll want to pick up a Bluetooth game controller. Samsung sells one (separately, for US$80) that fits the bill, but we paired the Note with a $60 Moga Hero controller and it works great. We were also able to use the Gear VR with a Sony DualShock 4, but the action buttons were mapped wrong (they were all one spot out of place).

If you're inclined to lengthy VR gaming sessions, then you might want to wait for a commercial version of the Oculus Rift that will connect to a PC. For starters, the Note's battery drains pretty quickly when using graphically intense VR games (around 15 percent for every 15-20 minutes). In those same games, we'll also often see a message telling us that the Gear VR needs to cool off to run at full speed (that one is usually after about 20-25 minutes in HeroBound), at which point the game starts to lag a bit. It looks like the Note's processor and/or GPU go into cool-down mode once the phone's temperature hits a certain level.

Both of those limitations, though, will show much less if you play more casual apps or games, or if you leave the brightness on a low setting.

You have three straps in total, to help find the most comfortable fit (Photo: Will Shankli...
On the other hand, you might not want to stay inside virtual reality for much longer than 20-25 minutes at a time. The longer we stay in, the more we experience some motion sickness afterwards. Nothing that requires a mop, but just a slightly queasy and disoriented feeling, as if we'd just gotten off a roller coaster. Oculus' apps and games have their own ratings to help you prepare, with labels like "comfortable for most" or "comfortable for some."

Another key difference between the Gear VR and the PC-based Oculus prototypes is the lack of body tracking. The Crystal Cove and later Oculus kits use a camera to track your upper body movement, opening the door to "leaning in" to get a closer look at something in your virtual world. Like early versions of the Rift, the Gear VR only tracks your head.

It's made by Samsung, but it's software is made by Oculus (Photo: Will Shanklin/Gizmag.com...
Samsung was probably wise to market the Gear VR as an "Innovator Edition" for developers and early adopters. The software library is just getting started, and the whole "only compatible with one phone" thing limits its reach as well.

The Gear VR, though, is the kind of device that might turn you into an early adopter. Virtual reality is more than just a novelty, and you have to experience it to fully grasp it. Once we step into the Rift (or, in this case, the Gear), we want to keep going back. If you're a Note 4 owner with $260 or so to spare (for both headset and a Bluetooth controller), we think you're going to have one hell of a ride in there.

The Samsung Gear VR Innovator Edition, powered by Oculus, is available now for $200.