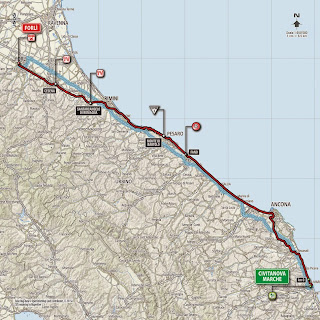 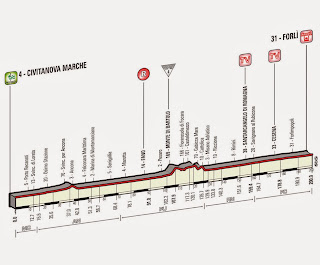 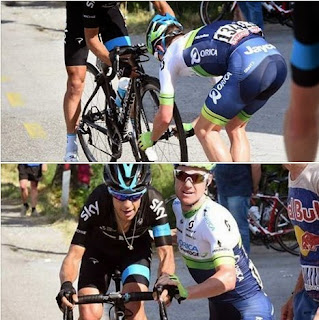 Orica-GreenEdge's Simon Clarke gave his compatriot a front wheel after he puncture in the finale to stage 10 of the Giro d'Italia
“He’s just another Aussie, mate,” Clarke told Cycling Weekly afterwards. “He punctured and obviously needed a hand. It was one of those split seconds where it could have cost him the Giro.”

“It’s a unique situation, it’s not like we have someone on GC,” Clarke added

“All of Aussies get along well, it’s not like I was colluding with a team we are trying to race against. I’m just trying to help out a friend. Right when he stopped, he had no one. I was right there and about to sit up and roll in.”

Porte pucturend his front wheel and when the TV images showed him, he had around four teammates helping to save his Giro d’Italia position.

After the time loss, he sits fourth behind Contador by 1-09.

Asked what he thought about critics raising questions about him helping a rival team, Clarke added, “I was just helping out a mate.”

“We benefited, but sometimes you are also colleagues and there’s respect. It’s nice to see that. A lot of people think on the bike that people fight with each other…When you are going for results, maybe, but at times friendship is stronger than a team at times.

“It was a nice gesture. It probably helped him lose less time. Cycling is a big wheel, so there will be a day when Richie will help him back.”
Porte mentioned Clarke, but did not explain directly what happened. Reporters were unaware of what happened at the time.

“45 seconds… We’ve been fighting for one or two seconds, then you have a little bit of bad luck,” Porte told reporters after warming down.

“You have a long way to go. It was nice to see my team stop and help me, and Simon Clarke and Michael Matthews, good mates helping me as well. It’s not over. Taking the positives out of it; the legs felt great, [and I] live to fight another day.”

In three days, Porte might be able to gain that time loss back in the long 59.2km time trial from Treviso, before the Giro goes to the high Alpine passes the following week.


Muse-ette •comment 3 hours ago
Surely that breaches the UCI rule prohibiting "Non-regulation assistance to a rider of another team". Both riders could lose 2' and be fined CHF200 for a first offence.