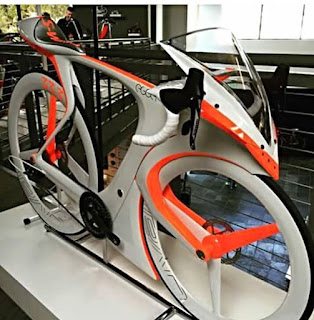 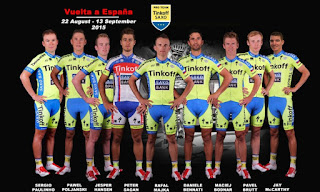 
18th Aug 2015 - News, Team News
Ritiro Tinkoff - Saxo Gran Canaria
Tinkoff-Saxo has selected the nine riders that will represent the team at this year’s daunting Vuelta a España, where both rivals and terrain represent the hardest edition in years. Rafal Majka will captain the team gunning for a top spot in the general classification against big GC stars, while Peter Sagan is set to tackle the fight for stage wins.

“Here, before the start of the Vuelta, our goal is to win a stage with Majka and secure a good final position in the general classification with him. Majka is our clear GC captain and he will be up against most of the big stars such as Froome, Quintana and Nibali. At the same time, we’ll support Sagan, who’s feeling ready after a post-Tour recovery period. He will be targeting the flat and hilly stages, while Rafal will have the backing of the entire team in the mountains”, says Tristan Hoffman, leading sports director at La Vuelta.

“With riders like Majka and Sagan we must have ambitions. They both had a really big peak in condition during the Tour, especially Peter, so we will have to see, where they stand as we get underway. Hansen, Paulinho, Poljanski and McCarthy will be important helpers for Rafal in the mountains, while we will be able to set up a strong sprint train and lead-out for Peter with guys like Bennati, Bodnar and Brutt”, adds Hoffman.

Vuelta a España commences Saturday, August 22 with an intensive TTT to Marbella immediately followed by undulating and mountainous stages that practically continue until the grand finale in Madrid after one of the toughest Vuelta routes seen in years. Rafal Majka, acclaimed climber, will take up the GC reins for Tinkoff-Saxo and notes that he enters the race with motivation.

“I start and face this Vuelta a España with great enthusiasm. I’ve recovered well, both physically and mentally, which is also very important before a race this long, hard and far into the season. I have prepared well at altitude and I will soon know how my shape is exactly, as this Vuelta definitely doesn’t have an easy start. I’m happy to lead Tinkoff-Saxo at this Vuelta, I believe that we have a competitive squad and personally I’m very motivated”, comments Rafal Majka, while teammate Peter Sagan notes that he’s excited to see how the legs respond after a period of rest.

“After a tough and demanding Tour de France, I had a good period of rest and I prepared myself in order to give my best at the Vuelta a España. I will assess my shape during the race. It will, undoubtedly, be a hard and challenging Vuelta and I look forward to going back to racing with my team”.

Vuelta a España will challenge the riders with no less than nine mountain top finishes concentrated in the first two weeks. Tristan Hoffman underlines that, although none of the 2015 Vuelta’s summit finishes have ever previously been faced, the three weeks of racing will undoubtedly feature large doses of demanding climbing.

“It’s a really tough race, there are so many stages that finish uphill on either proper mountains or on steep, shorter climbs. Stage 11 in Andorra has no less than 6 categorized climbs in just 138km and it is simply one of the toughest stages I’ve ever seen. Stages like this will be up to Rafal, he’s a specialist in this terrain and guys like Hansen and Poljanski will have to support him for as long as possible”, explains Hoffman before finishing:

“On the hilly and flat stages, we’ll be there for Sagan. Earlier this year, him and Bennati showed that they were able to set up successful sprints together. Furthermore, it will be difficult to control this race, so several of our guys might seek the breakaways to actively search for the openings. No matter what, we bring a group of guys that want to fight and we’ll see how the race progress day by day”.