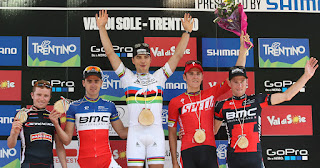 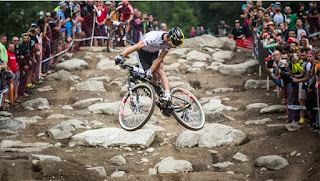 The 25th season of the Cross-country series in the UCI Mountain Bike World Cup presented by Shimano concluded on Sunday in Val di Sole, Italy, with the awarding of the overall titles for 2015. Jolanda Neff (Stoeckli Pro Team) and Nino Schurter (Scott-Odlo) maintained their leads in the women's and men's categories, respectively, to become the World Cup champions. While Schurter won in Val di Sole, Neff had to settle for second behind first time winner Annika Langvad (Specialized).

Rain overnight made the course wet and muddy, slowing the track and making sections slippery. Through the day it gradually dried out, but riders still crashed frequently on mud-covered rocks and wet grassy descents.

Neff got her usual fast start in the women's race, with world champion Catharine Pendrel (Luna) and Langvad chasing through the start loop. As Pendrel faded back, Langvad seemed to be getting stronger and, surprisingly, Neff could not open a gap on the Danish rider. By the halfway point the pair were together at the front, and when Langvad attacked on the penultimate lap, Neff could not respond, leaving the Specialized rider to cross the line with a huge smile as she scored her first win.

Behind the lead two, Pendrel was joined by Irina Kalentyeva (Moebel Maerki), who then moved solo into third place, which she held to line. A chase group containing Maja Wloszczowska (Kross Racing), Emily Batty (Trek Factory Racing), Adelheid Morath (BH-SR Suntour-KMC), Lea Davison (Specialized), Blaza Klemencic (Habitat Mountain Bike) and Eva Lechner (Colnago Sudtirol) was starting to move up, but eventually split in the last lap and a half, as riders attacked. Wloszczowska took fourth, just ahead of Batty.

"I must say I can't believe it," stated Langvad. "It felt so good out there today. Last weekend I did a race in Leadville [USA] at three thousand metres. This entire week I was filled with jet lag, I was exhausted, didn't sit much on my bike. I thought 'OK, I'll do this race for the points, for going for the overall team award'. Even yesterday I did some intensity on the course and I thought 'whoo, I'm tired'. So I started out with very low expectations. Then, all of a sudden, I felt really good. When you catch a good wave, you just have to stay with that feeling."

"You've all seen how I have been struggling the last few World Cups with crashes, lack of concentration. But, this race, I actually put it all together. I had a little bit of a mistake on the second last lap, but I kept it together. I am so happy. I am beyond words."
"The last two laps I really had to put the hammer down. I could see Jolanda was struggling and I had to put it to my advantage. But when you go over your limit, you go a little bit cross eyed, especially going into the downhill part. But still, I kept it together. I really wanted the win and the tears came into my eyes when I came to the last stretch and realized this is really going to happen. It is an amazing feeling."

While Neff and Gunn-Rita Dahle Flesjaa (Multivan Merida) were secure in first and second for the overall standings, the remaining places were completely overturned by the results of the Final. Third placed Pendrel dropped to fourth, Davison moved up to third, and Kalentyeva bumped Batty out of fifth.

"Oh yes, this was a really tough race for me," agreed Neff. "Really hard. Tough climbing. Yeah, it really was a hard race. But I'm really happy I could take the overall. It means a lot to me and to take it two times in a row, yeah it's amazing."

The men's race had no upsets, with Nino Schurter and his constant rival, world champion Julien Absalon (BMC) moving to the front by the second lap, along with Florian Vogel (Focus XC). Chasing just behind was Jaroslav Kulhavy (Specialized), but the Olympic champion couldn't quite close the 20 second gap and remained in fourth for the entire race.

At the front, Absalon was making an effort to set the pace so he could hit the descents first, ahead of the faster Schurter. Schurter seemed content to let him do this, as the pair pulled Vogel with them until the final lap, when a series of attacks by Absalon knocked the Focus rider off their wheels, to finish solo in third.

It was only in the final descent that Schurter showed his skills, opening a five second gap to take the win. He was partially aided by a soft tire on Absalon's bike, that forced the French rider to be more cautious in the descents to avoid crashing.

"Honestly, I didn't feel that good at the beginning," revealed Schurter, "I was struggling a bit. I was just hanging in there and tried to stay up with Julien and Vogel. Towards the end I felt better and better. I tried to stay on Julien's wheel. I knew if I could get first into the descent I could win again. It was actually a lot of drafting from my side but, yah, I feel really happy about this win here. Happy about the World [Cup overall] win also."

"It [World Cup overall] was a big goal for me this year. It started with a bit of bad luck, I always managed to get second, but now three wins in a row is amazing and a big achievement for me."
Schurter, with three seconds and three wins, had a 250 point margin on Absalon for the title. Kulhavy, with two wins, finished third and Vogel jumped from fifth to third with his placing in the final round. Mathias Fluckiger (Stoeckli Pro Team) was bumped down to fifth by Vogel.

In the Under 23 Women's series, Jenny Rissveds (Scott-Odlo) completed an incredible clean sweep of all six events to claim the women's title, with Alessandra Keller (Strubey-Bixs) taking second overall and Lisa Rabensteiner (Focus XC Italy) jumping up to third from fifth with her third place in the final round.

In the Men's Under 23 series there was a change in the leadership after the final round, with Titouan Carod (Scott Creuse Oxygene Gueret) knocking Pablo Rodriguez of Spain out of the title by finishing second to Grant Ferguson (Betch.NL Superior Brentjens). Howard Grotts (Specialized) took third in the final overall standings.