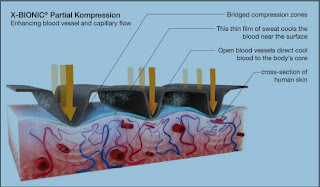 Better performance without doping
X-BIONIC® destroys another myth
Even surface compression may actually reduce sporting performance!
Scientific proof of this comes from studies by Prof. Dr. Winfried Joch, Institute for Sports Science at the University of Münster, and Dr. Sandra Ückert, sports medicine specialist at the Technical University of Dortmund:

Depending on the type of sport and the level of intensity, up to 97 percent of the energy consumed for it may be used for thermal regulation - meaning it is not available for the actual sporting performance.

Body temperature 37°C - the magic number
(H. de Marée: Sportphysiologie, Cologne 2003, p. 552)
The resulting excess heat has to be dissipated as quickly as possible, as otherwise the body's temperature could rise above the critical limit of 37°C.

A well-cooled body works better
(W. Papenfuss: Die Kraft aus der Kälte. Regensburg 2005, p. 104)
The less energy required for cooling the body, the more available for sporting performance.
Cooling is an energy-saving way to reduce sweating, which in turn not only has an affect on energy balance but is also required for the blood flow through the muscles

Classic cooling - the leg compress
This is a good time to mention the leg compress. It has been used as a conventional remedy for thousands of years, endlessly proving its effectiveness at quickly lowering the temperature - which is why it is still used in hospitals today. The blood is used as the "coolant" to cool the body down and prevent the organs from overheating. The new XBIONIC ® Spyker with X-BIONIC® Partial Kompression shown here
clearly illustrates the significant difference in temperature.
The key question: what really helps an athlete's performance:
Conventional flat compression - or the new X-BIONIC® Partial Kompression, optimising
capillary and blood vessel flow?

Using blood as a coolant for the body
When under pressure, blood flows into the expanded capillaries under the surface of the skin, where it is cooled by the increase in surface area and evaporation of perspiration.
Unlike other manufacturers, X-BIONIC® not only deliberately leaves sweat where it is, but uses it efficiently to cool the blood - and thus, the body - naturally. X-BIONIC® turns sweat into energy.

Thanks to the special knitted structures and the patented 3D-BionicSphere® system, unique X-BIONIC® high-tech products ensure that a wafer-thin layer of sweat is distributed all over the surface of the skin. This results in evaporation cooling on the skin, which helps to keep the athlete's body temperature at the optimum 37°C - and his performance at peak levels.

Sports Science and EMPA have the proof
The results of scientific tests carried out by America's multiple Emmy Award-winning TV programme "Sports Science" are highly revealing. The well-known TV station FOX TV presented its climate chamber tests, carried out at the Federal Laboratories for Materials Testing and Research, to a national audience in a highly informative and entertaining program.
http://www.sportscience-laboratories.com

The myth of even surface compression
If an even surface pressure is exerted, as with conventional compression products, the blood is pushed back into deeper layers, which is instantly obvious if you press a finger against your lower arm. The capillaries that transport the blood are squeezed together, and the area turns white. The cooling effect is prevented and the
body's thermal balance is in danger of moving into the red.

Two-dimensional compression only of use in hospitals
At most, two-dimensional compression stockings are worthwhile for bedridden patients. In this target group, the calf muscle pump known to us from cardiology does not work properly,and has to be supported by artificial compression. The human heart pumps blood to the body's extremities. As the result, bloods pools there and settles. This is caused by the calf muscle when we walk. As it contracts, it pumps against gravity and transports blood back to the heart.

It has frequently been proven that the counterproductivity of two-dimensional compression in sport can be compared with a hose that is permanently squeezed together. The flow volume decreases. Ergo even surface compression is wrong, it's a myth!
The result is clear
In a current independent study by the German Sport University DSHS of Cologne, all existing works on compression have been collated and studied, and the examination of a renowned competitor resulted in the following: "No one should think that they will be faster in a marathon if they wear compression clothing," says Dr. Billy Sperlich of the DSHS. He was unable to establish any evidence of an increase in performance with regard to oxygen absorption, heart rate or lactic acid production rates.

Whereas "… the right cooling effect increases performance by up to ten percent," according to Dr. Sandra Ückert. However, traditional two-dimensional compression prevents the body from cooling down, which reduces performance.

This puts paid to the myth that two-dimensional compression increases performance.
X-BIONIC® has already destroyed the myth of dry skin. Now it's doing the same to another one.
It's all down to holistic observation
The human body represents a complex feedback system that has to be observed as a whole.
So X-BIONIC® has developed some unique patented technologies that are used specifically where they can support or even optimise the body's function. X-BIONIC® deliberately dispenses with the singular approaches adopted by other manufacturers, who simply offer singular solutions such as two-dimensional compression: they only ever consider one part of the system, and so run the risk of being counterproductive. X-BIONIC® not only goes with the marketing mainstream, but is also brave enough to use its know-how and innovativeness to destroy myths. Which is why Prof. Bodo W. Lambertz and his development team consistently find new, ground-breaking products that other manufacturers - and their lack of ideas - can only ever hope to emulate.

The solution: X-BIONIC® Partial Kompression
optimised for capillaries and blood vessels .New X-BIONIC® Partial Kompression is the only solution in the world that leaves the capillaries free; that is to say, it does not compress them.
Revolutionary X-BIONIC® compression clothing is produced using highly complex technical methods: it is the only clothing of its kind to alternate between zones with and without compression. It is the only kind that allows blood circulation and heat radiation at the same time.
And it is the only kind that truly allows perspiration to cool the blood down on the thin capillary wall. This is the key criterion when it comes to achieving the optimum magic number of 37°C. The athlete saves energy; his performance remains high; he is able to stay at his limit for longer and attack at the decisive moment.