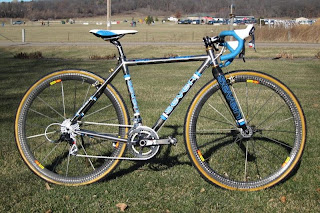 When Seven Cycles put Maureen Bruno-Roy (MM racing) on their new prototype carbon fiber and titanium cyclo-cross bike, the top tube said ‘Mohoney’ – a play on the name of their Mudhoney 'cross line. The Mohoney has since turned into the Mudhoney Pro, which will be a production bike in 2012.

The new bike, which was released as a prototype in October, incorporates additional carbon tubes into its design, when compared to the Mudhoney SLX bikes that Bruno-Roy has ridden for the past four seasons – not just the same model mind you, but the same exact frames.

While the SLX has carbon top and seat tubes, the Pro trades out its titanium seatstays, head and down tubes for carbon as well, in an effort to lighten the frame and further dampen the vibrations that reach the rider, while retaining the terrain hugging suppleness and feel of titanium.

Bruno-Roy’s Mohoney race rig was the first ’cross bike Seven assembled with carbon rear stays, which are an adaptation from the company's Elium SLX and 622SLX road bikes. “This rear triangle was completely novel for them, in terms of ’cross,” Matt Roy, Bruno-Roy’s husband, team manager and mechanic, told BikeRadar. "So this was the first one and it became the basis for the new Mudhoney Pro.”

Rob Vandermark, Seven's founder, laser-cut all of the titanium lugs for the Mohoney frame by hand. On the SLX these lugs are structural but on the Mudhoney they're there purely for aesthetic reasons, as the carbon tubes are mitered and bonded to each other. The new bike is roughly 1lb lighter than Bruno-Roy’s SLX rigs. “I don’t think they expected it to be that much lighter," said Roy.

Bruno-Roy’s Mudhoney Pro gets the SRAM treatment, in terms of groupset and accompanying kit – Red with a compact crank and 44-tooth Thorne Components outer ring, and Zipp’s Service Course alloy cockpit. The handlebar is Zipp’s new Service Course CSL, which is made especially for smaller handed riders and has a ‘super-short reach’ and two-degree outward bend in the drops.

Mo uses a 44-tooth outer ring. Since SRAM only make a 46t ring, she opts for one from Stu Thorne's Thorne Products. Also note the 'late model' Shimano PD-M970 pedals, which remain more popular on the cyclo-cross circuit than the M980 model due to their better mud performance

Deviations from the SRAM brand come in the form of Bruno-Roy’s TRP EuroX Mag brakes and Mavic wheel choices. She has both Cosmic Carbone Ultimate and R-SYS SL tubular models. The former are mostly used with Challenge Grifos (with both standard Challenge and FMB casings), whereas the R-SYS are set for mud with Challenge Limus and FMB Super Mud tires.

Roy takes a meticulous approach to the upkeep of his wife’s bikes and it shows through in the finished product. When we saw the bike the day before the USA Cycling cyclo-cross nationals in Madison, Wisconsin it sparkled and gleamed, with touches like fully sealed and shrink wrapped cables, custom stickers on the Fi’zi:k TK saddle and an expertly taped handlebar.