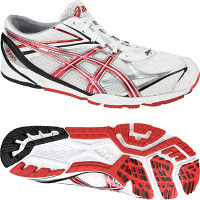 
Asics makes a few racing flats, including the Piranha, Hyper Speed, Tarther, and DS Racer, and the Piranha is the lightest and most minimal of the bunch by far, weighing in at a scant 4.6oz for a men's size 9. That's nearly two ounces lighter than the Brooks T7, which if you follow this blog, you're sure to have heard me rave about (I'll be using the T7 for comparison in this review because I'm familiar with it, and it's convenient because it's sitting next to me). According to Running Warehouse, it has a 5mm heel-toe differential, with a 21mm heel and 16mm forefoot. However, keep in mind that this is measured with the insole (which is non-removable), so it actually feels quite a bit lower than that. It is described by ASICS as such:

The Piranha has a cool understated look. It's not super flashy, and calls to mind the classic flats that were worn in the '70s. In addition to its appearance, the simplicity of the flat itself is also somewhat of a throwback, though it does utilize modern materials to achieve its incredibly light weight.

The Piranha redefines low-slung racer. For comparison, Piranha is on the left, T7 is on the right. No camera tricks involved.

The first thing you'll notice when you slip on the Piranha is that they are light. Like, seriously Light with a capital L. I know I wore the PR before this, and the PR was even lighter, but it still always surprises me when I put on a shoe that weighs this little. They are also extremely responsive. Their cushioning may be the tiniest bit softer than the PR (which again, assumes you've worn that shoe), but they are still much more responsive than anything else I've ever worn. The midsole is very thin, which also means you get a ton of road feel. The Piranha somehow makes many of my other flats feel like a trainer. All this goes towards making the Piranha feel fast. There is no way you can put on this shoe and not feel fast (unless you're out of shape, in which case you'll probably need more than shoes to make you feel fast). It almost feels like a spike...probably as close as you'll get with a road flat anyway.

Another thing you'll notice is that the Piranha has very little in the way of support. It has a tiny bit of a heel counter, where some blown rubber wraps around you heel, but even that is super flexible and doesn't do much to support your foot. If you try to twist it in your hand, it feels like there's some lateral stability, but that goes away the minute you actually put it on your foot. There are some overlays on the side of the shoe for the logo, but they don't do anything at all for support. This shoe is designed for the biomechanically efficient runner, and even then, is most likely best used as a 5K-10K flat. Possibly half-marathon, but keep in mind that even Ryan Hall and Deena Kastor use custom versions of the Hyperspeed for the marathon, since the Hyperspeed will offer a tiny bit more support and cushioning to help stave off foot fatigue. I've actually found I overpronate more in these shoes than in any of my other flats (including the radically curved and softer T7, as well as the ultralight and minimal PR). The physical therapy student in me can't figure that one out and wants to say that it's all in my head, but in reality, not everything is explainable with our current knowledge, so these end up being a short track interval and 5K shoe for me (whereas I was fine in even the PR for a half-marathon).

As I stated before, these shoes are more flexible than they look. When you first pick them up and try to twist them around, the sole doesn't feel like it has a lot of give to it. Not so when you wear it. The thin midsole makes for an incredibly flexible shoe. The forefoot feels the tiniest bit less flexible than the PR and T7 when you're walking around, but I challenge you to actually notice that when you're actually running.

You can't tell from this picture, but the Piranha a lot of lateral flexibility.
In your hands, the Piranha looks like they flex in a weird spot. This is not a problem when running in them.

The last is curved, but not extremely so. Along with giving the Piranha a universal fit that will work for many runners, this also has the interesting side effect of making it able to accept some orthotics. Since the insole is non-removable, this will only work if you have a low volume foot, so try it on before you buy if you fall into this category. While many people may question why anyone would put an orthotic in a racing flat, the Piranha would give orthotic wearers a very flexible and lightweight option for racing (assuming they were wearing the type of orthotic that also has some support built in).

While Asics description states that the Piranha has a lining that makes it conducive for wearing without socks, I've found that the tongue and lace area is kind of weird feeling, and it's the one pair of flats that I own that I honestly would rather wear with socks (I generally race and do speedwork sockless). There are also quite a few overlays on the upper if overlays tend to bother you, but to be honest, I haven't noticed them even when sockless. The biggest thing about the fit that bothers me is that the toebox seems weirdly baggy. However, keep in mind that I'm a woman with narrow women feet so you may not have this problem. The heel cup, on the other hand, is great and really hugs my foot nicely.

As far as durability goes, I really am not sure what to say. The blown foam on the side of the shoe got wear creases fairly quickly (<100 miles), but since there already is very little in the way of cushioning, you really don't notice a difference in the ride at all. Honestly, with a shoe like this, I would expect to probably bust through the upper before I wear out the cushioning (or lack thereof). So I'm not sure why those wear creases are even showing up, or whether it matters at all that they're there (I'm kind of guessing not).

Stress lines on lateral portion of Piranha. You can also see stress lines in the heel counter picture above.

These shoes have fine traction as long as you're on the road or track. They're intended to be a road shoe, and that's really where they need to stay. The Piranha + wet rocks is not going to go well for you. Also one more complaint: replace the laces as soon as you get these. They are very sheer and are terrible at staying tied.

This shoe also seems to have garnered a bit of a following among the minimalist crowd, and I can certainly see why. The Piranha actually feels lower to the ground, more flexible, and more minimalist than the majority of the shoes actually marketed as being minimalist. Additionally, as I stated before, there is a lot of road feel in these shoes. For example, there seems to be less underfoot even than with the New Balance Minimus Trail, which is one of the more highly regarded minimalist shoes on the market, though to be fair, I don't have a bunch of miles on the Minimus...just played with them in a store. I won't post too much on this subject, since I don't presume to know what the minimal crowd is looking for in their shoes (actually I have no idea whatsoever), but if you are a minimalist, definitely check out this shoe, despite the fact that it is marketed as a racing flat rather than as a minimal shoe.

In case that first picture didn't get the point across, this shoe is seriously low to the ground. Piranha is on the left, T7 is on the right.

Moral of the story is this is a super fast shoe for the biomechanically efficient runner looking for a short distance racer, and may also be an option for the minimalist runner who is looking to put as little between their foot and the road as possible. For overpronators who need support, supinators who need cushion, or people looking for a marathon shoe, you may want to look elsewhere for a shoe with a little bit more to it.

The Asics Piranha SP3 retails for $110, and retailers can be located on the ASICS website. Sizing is unisex (so women should go down 1.5 sizes) but fairly true to size (I have these in half a size smaller than my T7, which runs small, but the normal 1.5 sizes smaller than my trainers).

Full disclosure: I bought these shoes myself, so there is nothing to disclose. The opinions expressed in this review are mine and based on my experience, and do not reflect the opinions of ASICS or anyone else. 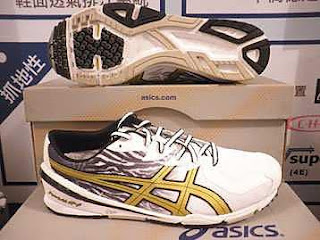