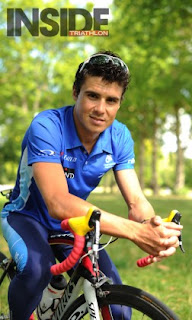 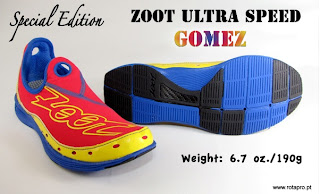 
When speed is the creed, look no further than the Zoot Sports Ultra Speed. Using a top down approach to building a fast feel, this shoe is perfect for any triathlete. For an inside look at the inspiration and triathlon-specific elements behind the Ultra Speed, we caught up with Dave Jewell, Zoot Sports Footwear Product Manager.

1. The Ultra Speed was designed with the unique needs of triathletes in mind. Can you talk about how the distinctions this draws from traditional running shoes?

There were two areas of focus when we looked at the Ultra Speed. First and most apparent is speed of transition. Transition time is always a concern for athletes. We already had fast shoes in transition but we thought we could remove the one thing that slows the process down, laces. Using our unique knowledge of compressive garments we created this upper. One that truly fits like a glove and ends up being the lightest upper in running. The next area was feel. Athletes told us they couldn’t race in the top end racing shoes from the other brands because they felt like running on cardboard (their words). So with the lightest upper we felt we could put some balance into the bottom of the shoe that is rather difficult to achieve with a heavier upper. When you add weight to the upper you have to subtract weight from somewhere. The final piece we added that makes it unique to Zoot was the Carbon Span+ piece in the midfoot. Because the piece runs into the forefoot under the ball of your foot the shoe has a responsive feel you don’t see in most racing shoes. This is very important because we know that trying to race a run off the bike is a challenge and fatigue sets in quickly. A responsive midsole can only be good when fatigue sets in.

2. Triathletes tend to be very specific in their product preferences. Can you explain how their feedback is incorporated into the Zoot Footwear line, and how that ties into Zoot’s philosophy on running shoes?
3 of the 4 differences we feel set our shoes apart came directly from the athletes. Easy On pull tabs, Tri Dry which is drainage along with materials that make up the inside of the shoe that simply hate water and BareFit that is our unique way of creating a shoe that fits around the bare foot. But those are things we can point to that make us different. The real underlying philosophy is that running shoes don’t have to be heavy to function. Weight matters to triathletes and it’s something they talk about all the time.

3. Can you talk about the biomechanics of triathletes vs. ‘traditional’ runners and how that effects product design?

The biggest difference is the bike. A triathlete sits on their bike for hours locked into pedals using major muscles to drive the bike forward. As much as their head says “run” when they get off the bike they legs say “but that’s not natural right now” Anyone who’s done a triathlon knows that feeling. So the design philosophy we call Tri-o-Mechanics is there to make that one experience more comfortable. We lowered the heel to forefoot differential because with thought the steeper angle was not as comfortable. We use CarbonSpan+ to create a super responsive midsole for tired legs. And lighter shoes just feel better when your legs are heavy.

4. Zoot Footwear has a strong foothold with triathletes, but is also popular at run specialty shops and worn by runners who aren’t necessarily training for and competing in triathlons; how do you strike a balance in satisfying both category of runners?

Race Day creates lots of unique challenges that were discussed in question #3. But training is different. In training, running is running. So we started by incorporating much of what we learned in building a triathlon shoe into run training shoes. In doing so we created some unique fit and feel that just wasn’t on the running shoe wall. The Ultra Kalani is the best example. Runners everywhere look at it with a rightfully skeptical eye because it doesn’t look like a “running shoe” but as soon as they put in on side by side with one of their traditional looking shoes it’s a completely different story. The reality is the shoe fits like the Ultra Speed, functions like any high end neutral trainer and feels unbelievably light on the foot. Our belief is that a legitimate running shoe brand needs a home in performance that allows that brand to test innovation and bring it to the everyday runner. Where many use the track as their performance base we use the sport of Triathlon. The Ultra Speed has probably brought more to all of our shoes than any other innovation we’ve done so far.

5. What’s been the reception to this shoe from some of Zoot’s top triathletes, like Javier Gomez Nova?
Well Javier has done one race in the Ultra Speed and finished 5th. He’s done two races in a new Speed Prototype we are working on and he’s won both of those. It’s always nerve racking when someone that talented starts running in your shoes. It’s exciting for sure and if his Race in Sydney is any indication when he crashed on the bike and then ran 30:09 for the 10K to win in a pair of Zoot I think he’s a fan of what we are trying to do. As far as our other athletes the Ultra Speed is their #1 choice of race shoe for races shorter than a full Ironman.

6. Can you talk about the fit and functionality of the Ultra Speed-i.e., what materials are used and what is the benefit of forgoing a lacing system?
The upper is a material we call Tek Sheen. Before we created Compress RX garments, Tek Sheen was our compression fabric. It has great stretch in one direction and doesn’t stretch in the other. We double layer the Tek Sheen across the grain. This is how we get a tight fit over the midfoot without laces. So when you slip the shoe on it fit’s tight on your foot but because it’s fabric used in apparel it’s not a constricting tight. As mentioned earlier the slowest part of putting on a shoe in transition is laces so by removing them the shoe is really fast and easy to put on.

7. The Ultra Speed has some similarities to other Minimalist running styles. Can you talk about how that running segment has responded to the Ultra Speed?
We built the Ultra Speed as the ultimate go fast shoe for the triathlete. In doing so we created what we believe is one of the better minimalist or natural running shoes on the market. It has everything that runner is looking for. Low to the ground, no restrictions in function and ultra light. The next heaviest thing you can put on your foot is a sock and when you slip the Ultra Speed on barefoot it’s rather liberating. We haven’t specifically sought out the minimalist bloggers but they have found us and found the Ultra Speed.

8. Zoot Sports has earned the reputation as an innovator in the triathlete space; can you talk about what’s on the drawing board right now for upcoming seasons?

I think what you’ll notice first is that we are addressing what the athletes tell us about our shoes. We take every comment seriously and somewhat personally. We are also working on some construction techniques that are a first in the running shoe world. Of course I can’t put that in print just yet.

There is a spectrum for minimalist running shoes - and even casual shoes - and here I detail what shoes I wear for different types of training and casually.

This video is part of a more complete post here:
http://strengthrunning.com/2011/02/spectrum-minimalist-running-shoes/


Thinking about embracing minimalist or barefoot running? Dr Marybeth Crane, a board certified podiatric foot and ankle surgeon, marathon runner and Ironman triathlete, in Grapevine, Texas, discusses a better approach to minimalism. It is imperative to realize that your feet are weak in their current state and you need to add a foot and leg strengthening program to your current regimen. Here are six simple exercises you can do daily to improve your intrinsic foot strength. For more info, go to
http://www.myrundoc.com or
http://www.faant.com
and check out the sportsmedicine blogs!
Publicado por cecilio benito alas en 7:53 p. m.