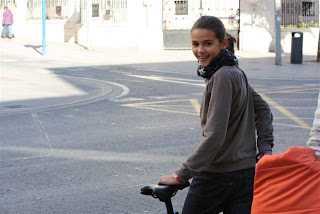 We formed Peopleforbikes.org (PFB) in 2010 to encourage individuals to show their support for safe, stress-free bicycling in their hometowns. We wanted to publicize and celebrate all the great things that happen when people ride bikes.

So far, so good! After a solid first year, the PFB movement nearly tripled in size during 2011. Nearly 500,000 supporters now power our collective, unified voice. We will continue to grow in 2012.

We’ve rallied the PFB troops four times so far to show how much Americans care about the federal investment in bicycling. In 2011, our movement sent more than 100,000 letters to U.S. Representatives and Senators. These messages made a strong impression, and inspired Congress to preserve dedicated funding for essential bike infrastructure and programs—at least for now.

Nevertheless, some members of Congress still want to eliminate all support for bicycling and reallocate that money to highways. They fail to recognize how the steady federal investment is boosting bicycling and helping our nation in many important ways. They overlook the tangible outcomes and the cost-effectiveness: 3,000 bike projects are backed nationwide for less than the cost of a dozen miles of multi-lane highway in a single city.

Your voices have made a difference. But the fight isn’t over.

2012 will be a challenging year for federal support of bicycling. Federal transportation funding expires at the end of March. Congress must either approve a new, multi-year bill or extend the current bill again. Either way, the value of ongoing bicycling investments will be debated. Future funding will be determined.

Peopleforbikes.org is ready for this fight, and we want all of our supporters to be ready for additional calls to action. Together we can protect key investments in bicycling that keep people safe and encourage more individuals to get on their bicycles.

Meanwhile, you can help us make our movement stronger by spreading the word and asking your friends and family to sign the pledge. Tell us how we can improve PFB by replying to this email or posting on our Facebook page. Finally, you can help us continue to protect bicycling by donating to PFB—even $5 or $10 can help us win this battle and assure that bicycling becomes safer and better for all Americans for decades to come.

Thanks, as always, for your action and your support .