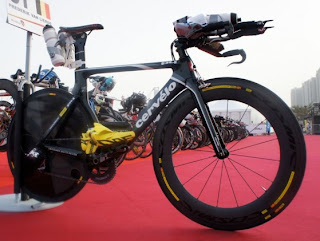 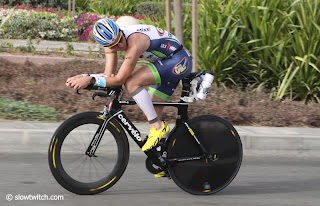 A rubber gusset fills the gap between tire and rim to improve aerodynamics.

Mavic Tri Helium shoe, one of our favorites.

O.Symetric chain rings have four distinct segments, they are not a consistent oval.

These Compressport compression calf sleeves ended up around his shins.

The front bottle supported by a Profile Design HC Mount, bolstered with a strip of duct tape.

Although it lacks an integrated front end like its new big brother the P5, Cervelo is still quite proud of this older model's aero performance.

At the defending champ, he got the privilege of racing with number 1.

Frederik Van Lierde raced a Cervélo P4 built with 2011 SRAM Red components left over from his 2011 season at the Abu Dhabi International Triathlon earlier this month. The Canadian bike maker and American component conglomerate both unveiled new top-line race products earlier this year, so Abu Dhabi may have been Van Lierde’s final race aboard this bike before swapping to the P5 and new Red component groupset. Although this bike is waiting to be retired, it is the same ride that took Van Lierde to victory at the 2011 Abu Dhabi International Triathlon, so it’s anything but outdated.

Van Lierde had a P5 when Cervélo released the bike back in January, but he gave it back after the launch event and continued to race his P4. His size 54 frameset is assembled with two tall headset spacers—they appear to be 2cm each—and a stem positioned with a -6 degree angle, which attaches his Profile Design Prosvet basebar and T2+ carbon clip-on aerobar combination. Unlike most triathletes racing the P4, Van Lierde uses the seatpost’s rearward position to mount his saddle at a relatively slack angle. His Prologo Nago EVO Tri 40, the one with the ridges on the nose, is pressed all the way forward on the rails, however.

His 2011 SRAM Red component kit is pretty standard pro spec with two exceptions. Many professional riders, both cyclists and triathletes, sponsored by SRAM opt to use a steel-cage front derailleur for quicker front shifting instead of the true Red front derailleur with a less stiff but lighter titanium cage. Van Lierde opts for the real Red front derailleur. O.Symetric chainrings are the second unusual aspect of his build. These rings aren’t circular like the standard issue or ovular like Rotor Rings. They have four distinctly different segments around the ring with a sharp transition between each one. When the crank is at 12 o’clock, the rings create a smaller effective gear by shrinking the distance from the center of the bottom bracket to the chain. When the crank moves to about, that distance from the bottom bracket to the chain increases rapidly as the chain moves over a sharp bend in the ring. It’s held at this more difficult leverage ratio through the most powerful portion of the pedal stroke. The lever arm again shrinks when the pedal moves back in to the dead spot at the bottom of the stroke to help the cyclist move through this biomechanically disadvantaged portion of a pedal stroke.

The Belgian raced aboard a tubular combination of Mavic’s Cosmic Carbone 80 front wheel and Comete Road disc with their Exalith metal brake track instead of a carbon braking surface. His front wheel benefits from a clever innovation that improves wheel aerodynamics. Mavic created a rubber gusset that fills the gap between the tire’s widest point and the rim’s brake track to create a nearly uniform surface. Filling the small valley, says Mavic, reduces aerodynamic drag slightly. It’s a pretty neat little upgrade, but, sadly, not available for regular folks. Just the pros.

To stay hydrated during the 200km bike leg, Van Lierde used three different hydration systems. He brought the frame’s integrated water bottle bearing the race number 1 in honor of his win last year and a round bottle between his aerobar extensions. The bottle mounted to his bars was supported by a Profile Design HC Mount and held by an EKoi bottle cage bolstered by a strip of duct tape for added bottle security. Two more bottles behind his saddle on a Beaker Concepts H.5 Rear Hydration System, also in EKoi cages supported by duct tape, finished his hydration setup.

For flat repair, Van Lierde appeared to only bring a canister of Vittoria Pitstop tire sealant tucked under his saddle. He brought extra nutrition in a bento box mounted atop his stem just behind his front water bottle. The Compressport calf sleeves wrapped around his elbow pads ended up on his shins.

His Mavic Tri Helium shoes were supported with a rubber band for his flying mount, a prerequisite at the pro level, even in a long race. Instead of simply looping the band around his front derailleur, he twisted the band to reduce its length and create a more rigid support for his shoe to position it horizontally above the ground rather than allowing it to dip.